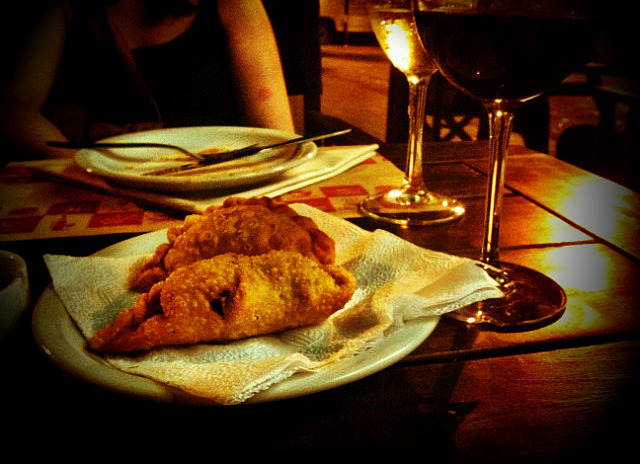 So we’re really finding our groove here in Buenos Aires.

I’m on a pretty strict diet of wine, ham and cheese. And a couple times a week, we treat ourselves to cafe con leche at our favorite morning restaurant, with a shooter of OJ on the side. Oh. And pasta. We have cooked in maybe half the time. Every second night usually, because we can’t muster the strength to leave the house with our terrible hangovers. And when I say “we’ve” cooked, I mean all the roommates take turns. Except me, of course. As most of you probably know, I’m a big failure in the kitchen, and the kitchen here in Buenos Aires, or, our cocina, if you will, doesn’t bring me any more luck than at home. I’m not allowed in. Except to pour wine and do the dishes. The only shit thing about being fed home cooked meals every night without having to chop or boil a thing, is you’ve gotta clean up.

But it works out for everyone really. And I eat well. There’s not a huge selection in the grocery stores. And our oven doesn’t have a window in it. Just a big hole where the glass should be. So our options are rather limited. Every night someone makes a version of the exact same dish. Pasta. Sauce. Onions. Cheese. Once in awhile we’ll toss in some basil or sausage. It’s quite the treat, haha.

I sure do miss bacon though, I have to say.

We have yet to have an Argentinian steak, which is rather famous. I guess we’ll take a break from pasta one night this week and go out in search of that. It’s high on the to do list. As is a tango show, a return visit to La Parilla de Honduras for more mouth-watering empanadas, a visit to the Cemetario de Recoleta to check out Evita’s grave (cool? or morbid?) and we have been watching the weather like nutcases searching for some sun so we can spend another day laying out in the park. We’re even going to skip school that day. Hehe, yup. Badass right? It’s been pretty overcast lately though. I’m actually whiter than when I left. Which is just unacceptable. We did read about a winter snowstorm warning in Calgary today though…. Is it wrong that it made me grin? Haha. Apologies to my friends back in Calgary. I’m being insensitive.

This weekend was fantastic. Friday came, and I got that TGIF feeling for the first time in about two years. As a flight attendant our schedule isn’t at all a “Monday through Friday, 9-5″-type situation, so I forgot what the Monday blues felt like. And similarly, what it felt like to leave work (or school) Friday afternoon and have a blast of energy and a renewed feeling of freedom. We picked up some champagne, and about four bottles of wine… maybe six, and head home to shower and hit the town!

After blasting off the top of the champagne which nearly blew my head off, and then cleaning up the huge mess we made all over the bedroom floor (hehe), we started the night off with a big glass of vino and a couple… okay, six of our favorite empanadas at La Parilla de Hondorus. We met a French woman who was on holiday from her teaching job in Chile. She joined us at our table and all of a sudden the conversation became a complete mixture of English, French and Spanish… all rolled into one. And I’m sure the wine helped it all flow along seamlessly.

At one point, Val excused herself to use the washroom, and myself and our new friend, along with all the other people sitting on the little patio, continued our conversations and sipped our wine. After maybe twenty minutes, another restaurant patron made a joke that my friend had left me there. I laughed and shook my head, wanting to steer everyone’s attention away from her extended bathroom visit, as I assumed, since we were in South America where such a situation wasn’t uncommon, that she had the shits. I was trying to help her save face. I swear! Well, after maybe another five minutes or so, one of the server’s came out and asked the French woman something I didn’t catch and she followed him inside. I picked up my glass of red and had another swig.

All of a sudden, I heard clapping coming from the inside of the restaurant. I tried to peer in and see what was going on, but before I could, Val, our new French friend and a parade of servers came out onto the patio. As it turns out, Val had managed to lock herself in the bathroom. That’s where she had been all this time! And it wasn’t until she literally was pounding on the door and yelling “help” at the top of her lungs that one of the servers figured out what was going on. They had tried to tell her, in espanol of course, to take out the key and slide it under the door so they could unlock it from the outside, but her Spanish wasn’t quite good enough to understand that. (And I’m sure her panicked state didn’t help things.) So they had asked the French woman to come and translate. Haha! In her defense, the keys and locks here are very old school and can definitely be tricky.

Although, we all tried it later on and it seemed to work fine… haha.

It was wildly amusing. Val refused to go the bathroom again until much later, when she got desperate, and the server promised to stand outside the door guarding it for her so she didn’t have to lock it. Haha!

We stayed until the bar closed down and they sent us on our way. Probably around midnight. I don’t really watch the time that much here. (Seems late, I know, but in Argentina they don’t even tend to eat dinner until 9 or 10. Things just start later.) Val and I made our way towards the Plaza Serrano in Palermo, a square littered with bars and patios, so that we could meet up with our friends from last weekend.

We wandered down the quiet night streets. Well, quiet except for the HUGE rat that we passed munching on some leftovers. (We may or may not have squealed and ran for half a block.) We met up with our friends at a local bar (I can’t recall the name… imagine that) and spent the rest of the evening chatting and drinking on the rooftop terrace under the night sky… until the wee hours of the morning.

Buenos Aires. Famous for it’s nightlife. Now I know why.

Saturday we had big plans to head back to Parque Lezamo, but due to our late night escapade the previous evening, we didn’t manage to collect ourselves until around 2pm. All we could manage was to drag ourselves up to our rooftop terrace and chase the sun that peaked out behind the tall surrounding buildings while sipping on some birthday mimosas with our roommate Danny. He was turning 31 that day, so regardless of how exhausted we were, it was party time. After a few hours up on our terrace, our stomachs began to growl, so we made our way to a little hole-in-the-wall restaurant and pool hall and dove into a big cheesy pie of pizza followed by a few games of pool.

Needless to say, Sunday was a write off for me. Val did get me to leave the house at one point that day. I crawled my way through the streets alongside her and Danny in search of an open cafe. Everything is closed on Sundays. It’s near impossible to accomplish anything in the city. We had to walk for probably 10 blocks to find an open cafe. I was so out of it and plagued with hangover, I couldn’t paint you some lovely picture of our Sunday stroll if I tried. I do remember that I lost the heel of my sandal. Don’t shop at Ardene. Cheap crap, I tell you. Cheap crap.

Although I still wore them today. Yes, heel-less.

Hey, I never said I was classy.

Anyway, time to go enjoy a quiet evening at home with my roommates. Do some homework. Eat another version of the pasta… tonight there are carrots in it! Probably watch some more movies with Spanish subtitles. Learn some new words, hehe.

Five more days here and a lot more to accomplish! Must rest up tonight!