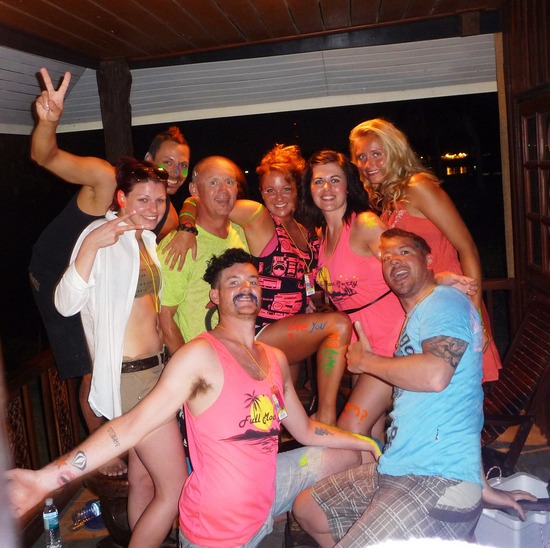 I took my seat in the sun of the longtail boat that would take me back to the mainland of Krabi where I would have to find my way to Koh Phangan, with absolutely nothing booked. The sun was hot, but with my travel days now numbered I was determined to soak up as much heat as possible. I listened to Smashing Pumpkins on my iPod and felt the droplets of sweat form under my knees and trace down my calf muscles.

When I arrived in Krabi, of course I was immediately bombarded with tour operators offering me overnight busses to Koh Phangan. I shook my head. No, no. As I had planned to spend only two days on that island to see my friend Tannan from work, I had to get there that night. Plus I had no phone and no internet to let him know otherwise. I had to get there tonight. To my dismay, the busses that could have taken me in time to make the last ferry to the island had already left. My only option… and very expensive option, was a private taxi.

And so, I paid a nice local man, 2500 baht (about 75$) to drive me two hours to the ferry port so that I could make it in time. At least I got to sleep in the backseat the entire way. And my way of thinking was, since my trip was shortened, what difference if I spent a little more money anyway? 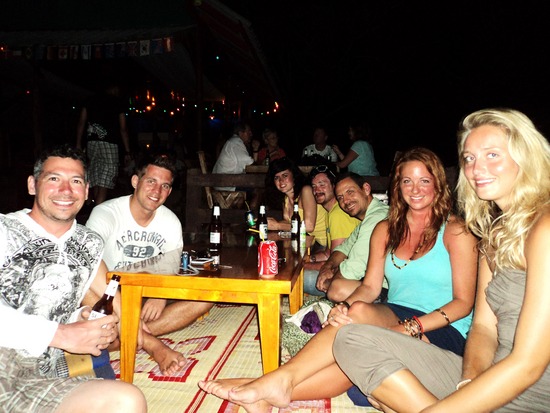 Well, what started out as a quick two day visit with some friends from home quickly turned into a full blown holiday of it’s own. Quite the contrast to my week of wellness and yoga on little Koh Yao Noi, although the crowd of people I was hanging around with were not your typical Full Moon Party drunken 18 year olds either, so that was nice. Most days we spent cruising around on the motorbikes the boys (Tannan, a friend from home and his brother Benny) had rented – thank goodness I didn’t ever have to try to work one of those on my own. You pass people in the streets all the time with one side of their legs and arms wrapped up in bandages from motorbike accidents. I did not need any more medical bills piling up this trip.

The boys were there to kitesurf. Or kiteboard. I’m not sure if they’re the same or I’m saying it wrong or what…but there’s a board, like a snowboard, that you ride on top of the water, like you’re surfing, being pulled by a kite. So there you go. There was a nice little community of them that were all staying at the little beachside resorts on a quieter side of the island (aka not in Haad Rin where the Full Moon party is). One of the kiters, Ben, was traveling with his fiance Cassie, so her and I enjoyed liberated afternoons by the beach or the pool, with music coming from the speakers and trying to catch the boys doing some jumps and things (although it really is exhausting on the neck to be laying down sunbathing and trying to watch out in the water). 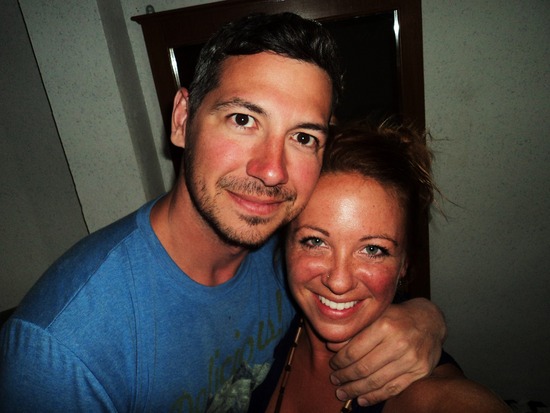 Here in my holiday it especially breathes true that the people make the trip. Everyone became like a little temporary family. There was Ben and Cass of course, who were from England, and maybe one of the coolest couples I’ve ever met (who I’ll hopefully meet up with in England in a few months). Then of course the Taylor brothers, who I’d come out to meet up with. Then there was Kim, a tall, blonde Dutch nurse, soft spoken and with an absolute heart of gold. And then, there was Paul. Oh, Paul. An English man, living and working in Australian who had been traveling for the past three months, had a heart full of love and unbeatable sense of humor and pockets overflowing with stories and tales to entertain us all for hours on end.

We all usually met up late morning at our favorite cafe for a round of raspberry shakes and either pad thai or museli, followed by mocha’s decorated with hearts made out of cream that the Thai girls serving us worked hard to form for the boys. They knew us well and giggled at everything Paul said. Blushing and whispering. It was sad, on our final day… well on the boys and my final day there, we said our goodbyes and they all came out with arms outstretched for big hugs and of course, a group photo.

One particular day, while we all sipped raspberry shakes, twirling our Pad Thai noodles around our forks and Paul was getting tea’d off his face (he literally would drink four cups in one sitting), he started to tell us about the massage he’d had the night previous. (I only wish I could somehow convey through this blog his accent, his tone and the massaging motions he made with his arms as he spoke… haha.) 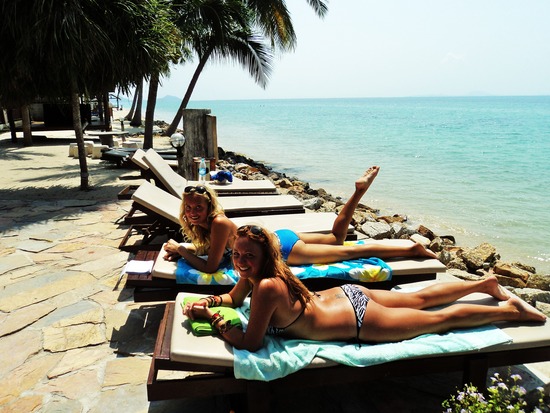 Now, I knew or had heard of the famous Thai “happy massage”… but what I didn’t realize was all the options out there. You have your “happy” massage, which as I understand it was just a” hands on” experience… if you know what I mean (sorry, I’m really trying not to get to graphic here). Then there’s the “special” massage… which I’m still not clear about. If anyone can clarify that one, please feel free to comment here. And finally, there is BOOM BOOM.

Ahhh… BOOM BOOM. A phrase you cannot escpace Thailand without hearing. (Well, unless maybe I had left directly from Koh Yao Noi and stayed plugged into my iPod all night in Bangkok).

Boom boom… is the full meal deal. Boom boom is the sex. And when you stroll into one of those relatively reputable looking massage shops to work out the knots from a day of kiting or you know, ease the stress from a long day lounging by the pool… you just never know what you might get offered.

Okay, so Paul starts to tell us about his massage. The conversation goes something like this.

And then… Paul noticed the book.

This was without competition the single funniest source of humor and entertainment out of my entire trip. This book. And I think I may speak for others in saying that as well. We spent our entire trip repeating the phrases to each other, and I’m sure if you scan down our Facebook walls, you’ll notice a few things that seem a little odd. Even now, writing this journal enroute to Bangkok, I am giggling aloud to myself. I know, loser right? Trust me. If you had read this book, you would be too.

Essentially it’s a translation guide for men trying to pick up Thai women. Similarly, Thai women can use it to pick up foreign English-speaking men. Seriously, this masseuse had one next to her and when Paul flipped through and sequentially read all the questions she had asked him, his ego flew out the window as he puts it.

The categories range from “What’s Your Name?” to “Paying the Bar Fine” to “In the Hotel Room” to “Sex” to “Safe Sex” to “Love and Marriage” and even “Breaking Up With Your Girl”.

Here are just a few of my favorite onee (each has the english and Thai translation – phonetically and in Thai script):

– If I don’t have you, I will die for sure.
– I am very good in bed. Just ask anyone. They call me Mr. Love.
– I don’t like a dirty body. Show first, ok?
– I take a bath about four times a day.
The view from our bungalow
The view from our bungalow
– I really don’t want to catch a disease. Then my wife will know I have been visiting the girls and not the temples.
– I don’t like condoms, but I know we must use one.
– It’s okay, I want a baby.
– I want to sleep with four girls tonight, is that okay with you?

Oh my goodness, I could seriously go on… I have at least six more pages flagged down. But I think you need to ask me about it and read it for yourself. (After a few beers, reading aloud with a crowd of people makes for amazing entertainment.) Maybe the hardest I have ever laughed was when we all sat on our little veranda drinking beer and covering ourselves in body paint while Ben read nearly the entire book aloud and we all clutched at our abdomens in absolute hysteria.

Next time you’re at my house, remind me to show it to you. Or maybe I’ll just carry it with me in my purse. It’s a must see for all. 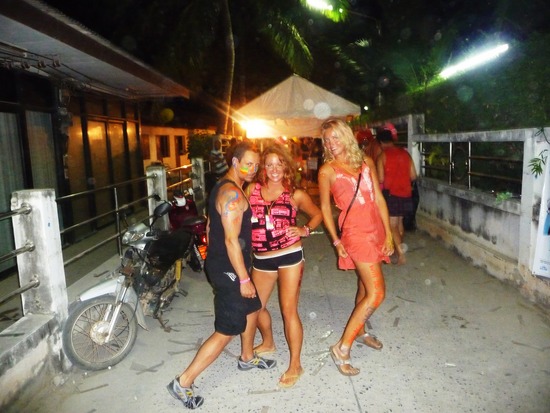 So, yes, I did end up staying for the Full Moon Party. We went out on our scooters during the day and bought ridiculously bright colored shirts and body paint and spent about four or five hours getting each other all ready and sipping beers (and, like I mentioned, ready from our favorite book). At 1130pm, we caught a taxi to Haad Rin and were dropped off at an entrance where we were given a wrist band and released into the crowd. CROWDS AND CROWDS AND CROWDS. The beach was littered with stalls selling buckets of alcohol and red bull and people were either dancing to the blasting trance music or passed out on some of the straw mats that had been layed out. And it was only midnight. We found a spot near the beach where the water kept our toes wet and the music was distant enough to speak and danced a few hours away. Around 3am, we were ready to go home.

After a quick dip in the pool to wash off the body paint, we all crashed for a sleep that took us into the next day and past noon. Oh well, all we had to do the next day was get up, soak up some sun, drink some raspberry shakes, see a Muay Thai fight (which by the way was fantastic), have dinner at the night market (where everything is cheap and you can’t help but order at least three separate meals, and then a banana cake for a treat later on). Life was simple. And I was loving it. 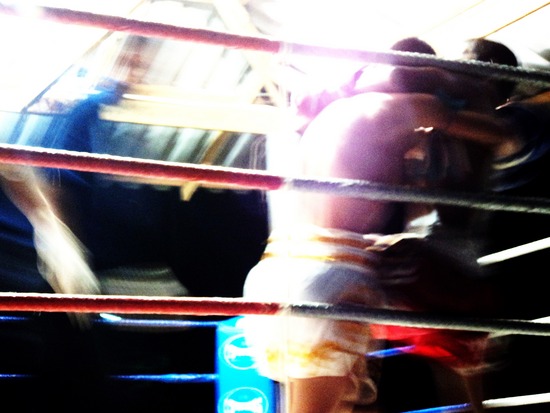 The best thing I’ve learned about this trip is that the traveling part is the worst part. The flights and busses from country to country, city to city – it’s exhausting. I’ve had such an amazing time, but I am exhausted. I’ve done four countries in just under seven weeks. The best times I had were when I was a little bit settled somewhere and had people to enjoy things with. I think moving forward the plan will be take on the world, still, of course, but maybe one place at a time. Pick a place. Rent a house. Explore from there. Maybe that’s the Cancerian homebody in me finally coming out… who knows. But that’s how I’m feeling. One flight at the beginning and one at the end, and that’s sufficient.

All that aside though, I can’t even begin to retrace all the amazing times, people and memories I’ve been blessed with from this trip. Despite the bad luck and stomach problems, I’ve been lucky enough to see some of the world’s most incredible places and have some unforgettable experiences. And although I’m so happy to be home again to see my friends and family and sleep in my bed (although I’m terrified of the weather…), I’m already dreaming up my next adventure.

Thanks for reading.
Stay tuned.