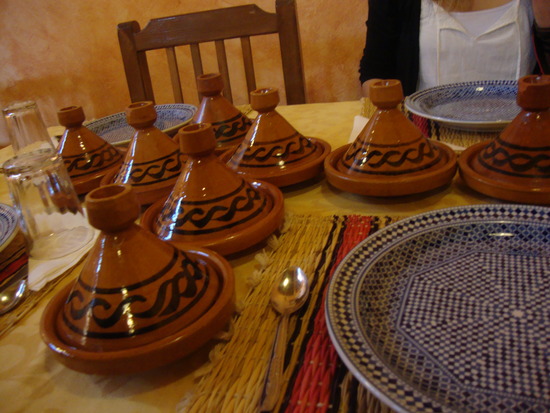 Friday. Travel day. We had to get up at 6am and breakfast was served at 7. The Supratours bus left Merzouga at 8. Sigh. More early mornings. Jody and Rob got up and joined us for breakfast. Jody had been raving about the breakfast at the riad for the last few days so we were eager to try what she had constantly referred to as “food of the Gods”. We all sat around the elegant table, bare-faced and droopy-eyed, while Ahmed carried out trays of mini tangine and jugs of fresh orange juice. The breakfast was an absolute feast. Tea, fresh orange juice, the mini tangines were filled with jam, sauce, cheese, hard-boiled eggs. These rectangular flat pancake/crepe things (which are apparently a staple in Moroccan breakfasts we would discover throughout the rest of our trip). Bread. So much bread. And best of all, ZEROS. They’re these deep-fried croissat-type things in the shape of donuts. They are amazing! All I want in my life is some more zeros.

We got into Marrakech around 8pm. This time we booked the Equity Point in Marrakech. It’s a small chain with hostels in Spain and Asia. We paid 180dh which includeed breakfast. The place was huge. It had an indoor pool, a few large lounge/sitting areas and a rooftop terrace. There were dorms on the outside of a courtyard with 6 beds, lockers and an ensuite bathroom. We went out into the medina that night in search of something OTHER than tangine. We walked through the skinny streets and wide-eyed faces and took in the sights and sounds of the city as it was our last night here. “Hello baby.” “I love you.” “Oh Spice Girls.” “Wow.” “Oh my God.” Haha. We were getting good at ignoring and walking on by.

We found a dingy little pizza place with tables set up on the walkway. We pulled up a chair, ordered up some pizza and pineapple juice and settled into people watch the night away. The pizza was terrific. It was thin crust, melted cheese and fresh. And only cost us 32dh! It was such a welcomed break from chicken tangine, chicken tangine and more chicken tangine we’d had thus far. Full with cheesy goodness, we went back to the hostel and passed out into the fluffy pillows.

We woke up after a near 10 hour sleep. The windows to our hostel room were completely blacked out with thick curtains so no light got in at all, allowing us to get all the rest we clearly needed. One of many long rests I would need to be rid of my pesky head cold that was quickly becoming less pesky and more completely traumatic. Shai slept in a bit longer than me, so I ventured up to the roof terrace in search of juice and breakfast. I sat at a table in the sun and was served… orange juice, mint tea, bread, butter and the Moroccan crepe/pancake things. I picked away at everything and read a few chapters in my book. I’ve been reading A Thousand Splendid Suns by the same author that wrote the Kite Runner. My mom leant it to me and when I started into it the day earlier on the 12 hour bus ride, I made it 3/4 of the way through before putting it away. It’s interesting to read about a Muslim country (Afghanistan) while traveling through a Muslim country, although the extremes described in the book seem a far cry from anything going on here.

Anyway, I digress. After my leisurely breakfast and some quality time on the free computers, I inquired about check out time. He smiled back and said it was at 10am! It was already 1045! Thankfull the Moroccans are extremely laid back, especially about time. I managed to even squeeze in a shower before packing up and dumping our bags in the hostel storage. We hit the souk to get some of our souvenier shopping done. Because there is so much competition in the souk (the stall 2 doors down always carries the exact same thing), the prices are the best. (After finishing my trip to Morocco, I can tell you that yes, Marrakech IS the best place to shop. Fez is cheaper for some things, but there are less stalls close together like that, so shopping takes more walking and some things are harder to find. And in Agadir, most places fix their prices for those tourists who fly in and out of there and never stray far from their resort. Definitely not a good place to shop.) We grabbed a fresh orange juice from a food stall for 3dh. Delicious. What I will probably miss most about Morocco… the fresh squeezed orange juice everywhere you go. We’re completely addicted.

Then we had some fun with the locals, bardering hard back and forth, and came away with some amazing deals. You can barder pretty hard in Morocco, whereas I found in Peru some people wouldn’t budge even an inch, here they’ll really work with you. For instance, we were quoted 100dh/scarf and ended up coming away with 10 scarfs for 350dh! Haha. They kept calling us Berber women, who apparently are hard asses.

We caught the 1430 bus to Agadir (Supratours again) and got chatting with our seat neighbor, an English guy called Simon who owned a property rental business in Switzerland at a ski resort wo had just arrived into Morocco. He was heading to a quaint fishing village/hippy town 20km north of Agadir called Taghazout. It was a famous little surf spot that Jimi Hendrix had visited years back. We made plans to meet up for drinks in Agadir one night. 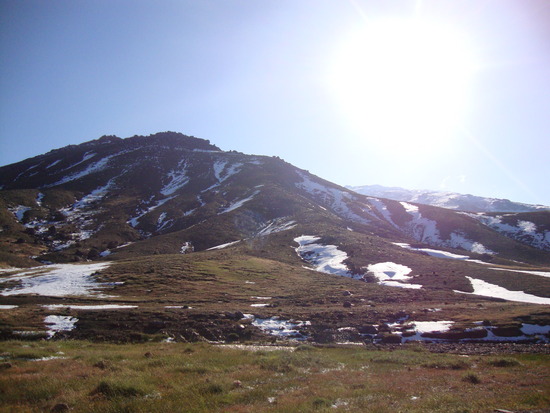 As the three hour bus ride came to an end, we pulled around a bend and the ocean revealed itself. Beaches. White buildings. Waves. And, we even passed some goats in trees. (check out what I’m talking about: http://www.youtube.com/watch?v=oQev3UoGp2M)