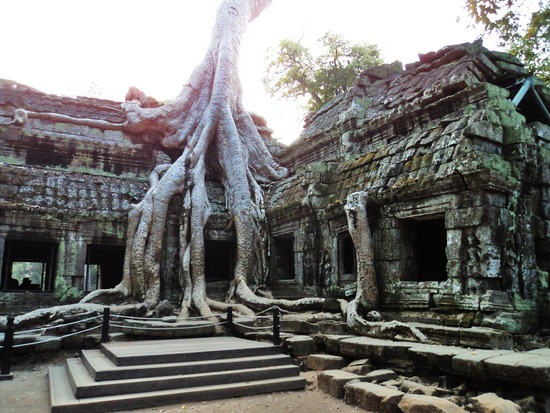 Well I’ll be the first to admit I’m no history buff. I’m on the girl that spends hours in museums marveling at the lives that took place there years and years earlier…. Not that I don’t appreciate it, it’s just not really my thing. But regardless of whether that’s exactly who you are, or you’re a little more like me, put the Angkor Temples on your agenda.

Day one we decided to head out in the late afternoon and hit Angkor Wat for sunset. Angkor Wat… massive. Absolutely massive. It’s said to be the biggest religious structure in the world. And from what we could see from the sea of Chinese tourists (note to future travelers, avoid Chinese New Year), it was beautiful. But after about an hour of wandering around, pushing our way through crowds and posing for “Where’s Sophie?” pictures amoungst the crowds, we tired of it and allowed our tuk tuk driver to drive us up to the ever popular crumbling eftovers of Bekheng Hill where we, along with all those same Chinese tourists, hiked up the never-ending dirt hill, and then some short and steep stone stairways (try to picture a 50-something overweight Chinese woman in a wide-brimmed hat tied under her chin, an oversized patterned purse and obnoxiously bright Crocs trying to manage these steps… I’m not trying to be mean or anything, but you can’t help but laugh… a little even? Does that make me a bad person?) Anyway. We found a little space along the ledge where our feet could dangle over and the height of where we were could really sink in and we watched the sun turn the entire sky a reddish hue before disappearing behind the trees. 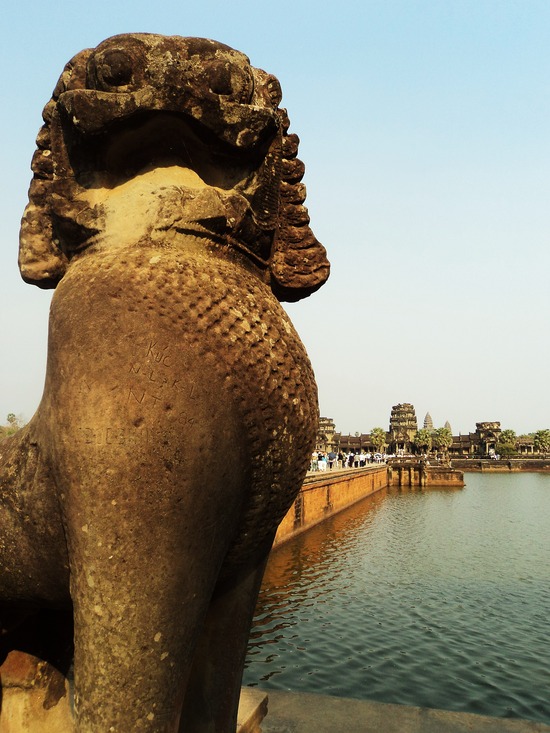 Then, we had to walk down. Us and all the Chinese tourists. All together. All at once. In the dark. The only thing I can say here is THANK YOU to my dear father who gifted me this nifty little yellow flashlight to take on my travels and has since come ridiculously in handy on numerous occassions. In this case, it helped not only Sophie and I, but about a third of the Chinese population as well… saved us all from tumbling down that hill like dominos. So, again, thanks Dad. We all owe ya one. Me and China.

So that was the day one. It was comical. It was beautiful. It was a sight for sure. But that’s nothing. Doesn’t even make my list of top 10 memories from the trip (which I haven’t actually sat down and created but considering I probably have about 8 hours minimum waiting in the Hong Kong airport to see if I make my next standby flight home, I just might do that). The real magic happened on day two.

Before you go any further… click this link. Don’t watch the video or anything, I just want you to have the background music so I can paint this picture for you as best as possible.

Got it playing? Okay.

Day two we dragged our butts out of bed at 5am and cuddled into the back of our tuk tuk where we nearly froze to death as we had dressed for a normal 28 degree day in Cambodia not taking into account the lack of morning sun and the sharp cool breeze from the tuk tuk. It was so dark out we couldn’t see where we were going. We had asked to go to Bayon which is a temple in Angkor Thom. When the tuk tuk driver stopped and pointed into the blackness, we could literally see nothing in front of us. Not even an outline of a big giant stone building to head towards. Again, thanks to that little yellow flashlight, we managed to carefully step over uneven stone walkways and up more steep, short, stone stairways and make out what we thought would be an appropriate place to sit. And just wait for the sun, I suppose. We weren’t sure where the best spot to sit was. There was no one around to ask. We were alone in the dark at some temple in Cambodia that we couldn’t see. So we just sat and waited. And listened to the XX on my ipod speakers as the sun, slowly but surely, turned the sky a pale pale blue and began to unveil stone-carved faces all around us. It was just us, the music and the temple. The faces in the temple, staring, smiling. Now that was magical. Absolutely magical. I know I’m running out of adjectives here, really, I know. But breathtaking. (Okay, next time I promise to consult thesaurus.com.) 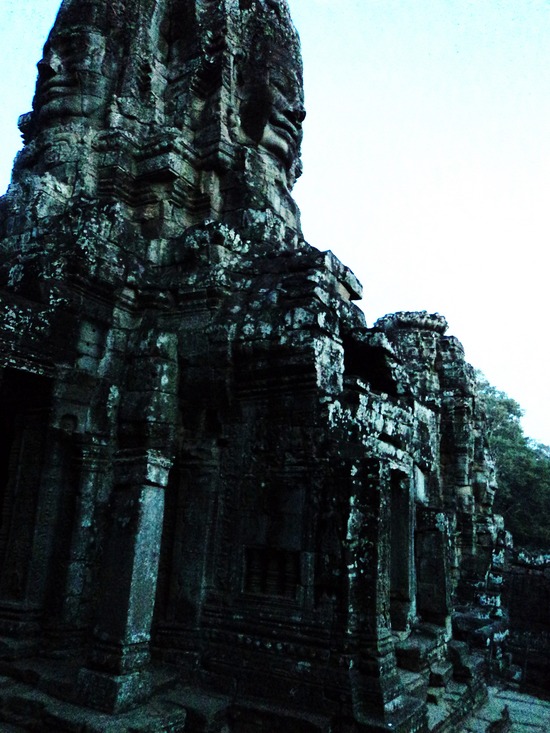 With the world lit up a little more, we wandered around the temple, greeting the seven other tourists/photographers we bumped into as we strolled. We strolled down the elephant terrace and took in the view as a random tuk tuk kicked up dust behind it rolling down the dirt road. We passed another temple under construction, Baphuon. Then on top of the terrace, right at the end, there sat a statue of a Buddha dressed in a yellow sash. He sat, overlooking the view. The fields and the quiet (well, at this time of day it was quiet). And then… our camera died. 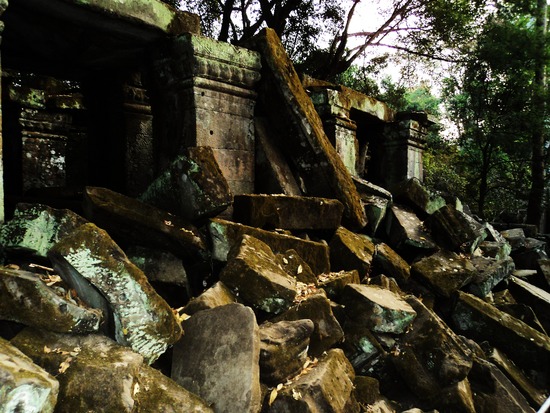 All this magnificence and no way to capture it. Of course, the images in my mind I will never forget, but anyone who knows me know’s I’m a sucker for a good photo.

Lucky for us, we had bought a three-day pass. So we simply made arrangements to come back the following morning at exactly the same time and essentially do it all again. The third morning didn’t quite go as peacefully as we had imagined however. Our tuk tuk driver was over-charging us to begin with, and then, part way through our ride there, when we were walking distance from Angkor Wat but a hell of a stroll from the other temples we had on our to do list, he upped the price again. Let’s just say words were exchanged. We told him forget it, and got out. He circled us for a little while, yelling profanities that I refuse to repeat on here… but we were not about to be taken advantage of, and so we walked on toward Angkor Wat, knowing there would be a load of tuk tuk’s sitting there in a parking lot eager for business. Stupid move probably, because these drivers knew we were screwed and had zero other options and because of the sunrise situation, we were on a timeline, so we ended up paying more than the first guy had upped our price to in the end. But hey, it was the principle. At least this guy was up front about it. What can you do…? 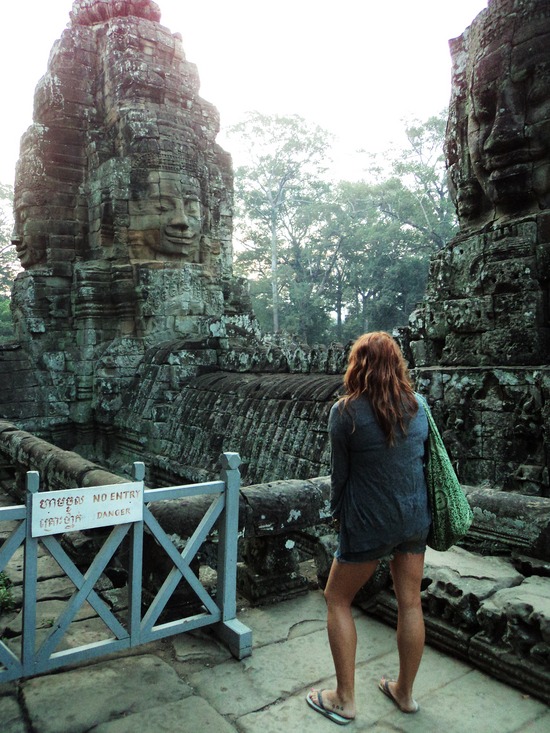 In the end, we got all the photos we wanted from beautiful Bayon and the lovely Buddha, and also got to visit Ta Prohm, which is covered in tree overgrowth and gives the astonishing affect that the trees and temple are one in the same. The pictures say it all, really.

And so that was my experience with the Angkor Temples. It is an absolute must for your life’s to do list. And, if I can impart one piece of advice… go for sunrise. Anytime before 8am. It’s well worth it. Just take an afternoon nap by the pool to make up for your lack of sleep.