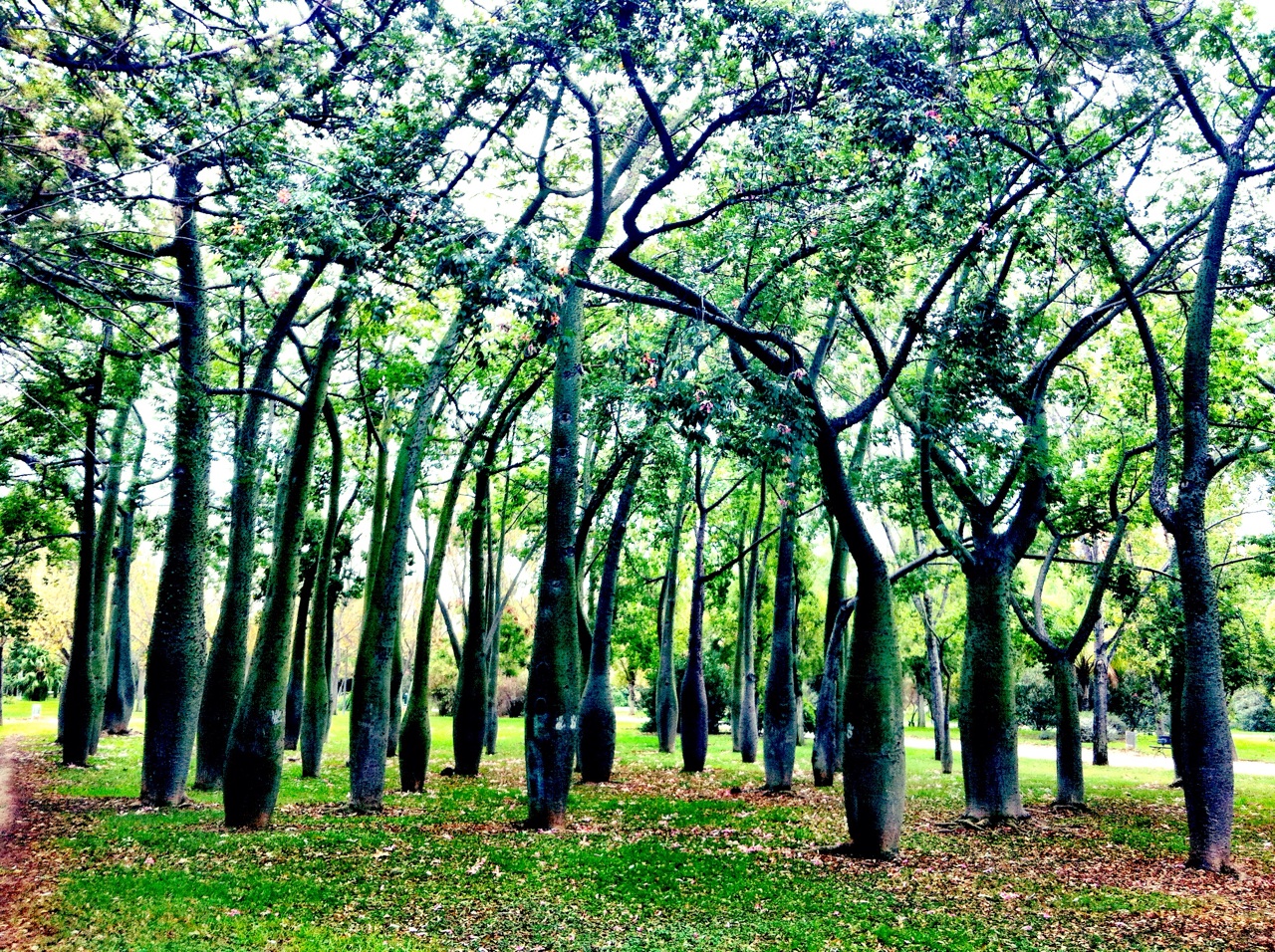 Well… This place is magical. I spent my afternoon biking through the Jardin del Turia… a beautiful city park that now runs in place of where the river used to and stretches almost to the Mediterranean. Everyone in the park today was dancing. There was a man sitting by the water, his hands gesturing up above his head, singing to himself. A woman walking alone, gliding up and down the pathway. I watched her and wondered what song she was playing in her head. And there was me on my bicycle that I had rented from a local shop. My heart was dancing around in my chest while Neil Young and Dan Mangan and Ingrid Michaelson sang through my headphones. I wish I had 100 more days here to bike and run and read and sleep in this park. And dance like we all were today. Trust me, if you were here in this park spending your afternoon this way, you’d be dancing too. You can’t help it. It’s marvelous.

Or maybe we’re all just crazy.

The streets and maps of Valencia are very hard to follow along with, so I didn’t try and fight them all that much, and spent most of my 36 hours in the city gloriously lost. And honestly, if there is anywhere you want to be lost, it’s Valencia. The architecture is beautiful. The streets are narrow. It’s so beautiful. So so so so beautiful. This was much more my speed and the Spain I was anticipating. I fell in love immediately, grinning like an idiot from the moment I stepped off the train. 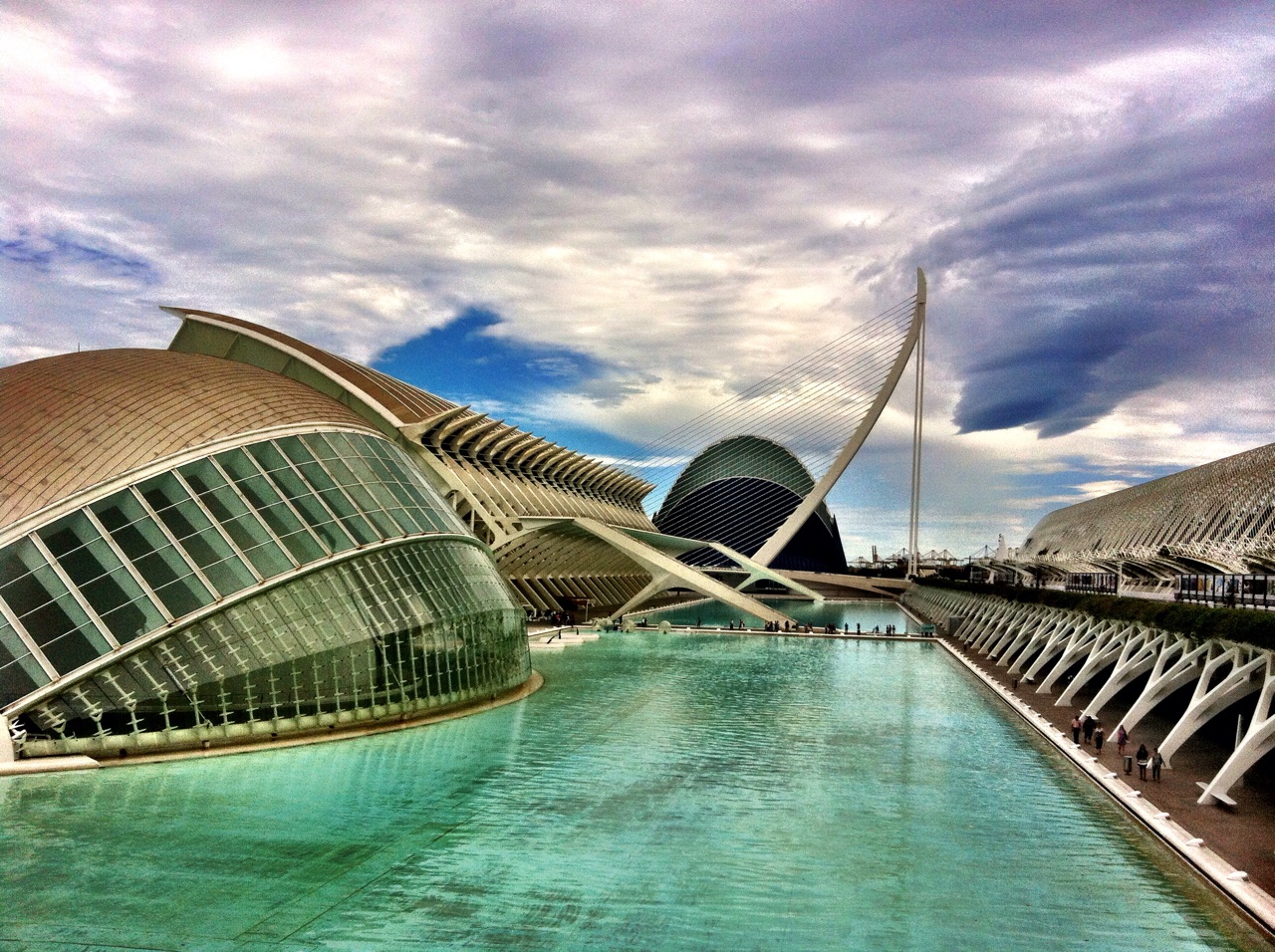 One of my challenges in traveling alone is my indecisiveness. I didn’t realize before, but this is a problem for me. On this trip, anyway. When to stop. Right or left. Stay or go. I began to notice this while I spent hour after hour strolling through Barcelona, perusing menus, considering options and not sitting down to eat anywhere until I was light-headed from hunger and weak from dehydration. Note to self: Must get better at this. There isn’t always going to be somewhere better around the corner. Sometimes maybe it is okay to commit. For a meal, anyway.

I made an effort to correct this during my time in Valencia. Any place I saw, I stopped in. Ordered a glass of wine, while perusing the menu, and if nothing stood out for me, I would simply pay up and move on to the next place. Or, I’d eat, and loiter there for hours, soaking in the ambience in the dimly lit streets. But at least then I was eating. And, as you can imagine would be a side effect of this plan, drinking lots of wine. And there’s nothing wrong with that.

I stopped for lunch part way through my day of biking, and encountered the best paella in Spain in the Plaza la Reina at a place called PicoFino that sat just outside the cathedral. (Keep in mind I’m only comparing Barcelona and Valencia, and within that only the few places I ate at, so you may be able to challenge me on this one.) I also tried the “melon con jamon” that Jen had mentioned was good. It’s serrano ham wrapped around chunks of melon. I have to say the jury is still out on that one. It’s refreshing. It’s intriguing. But I’m not sure if it’s really a winner for me, pairing those two flavors together. Easy enough to try at home though, I’d say, so give it a go. 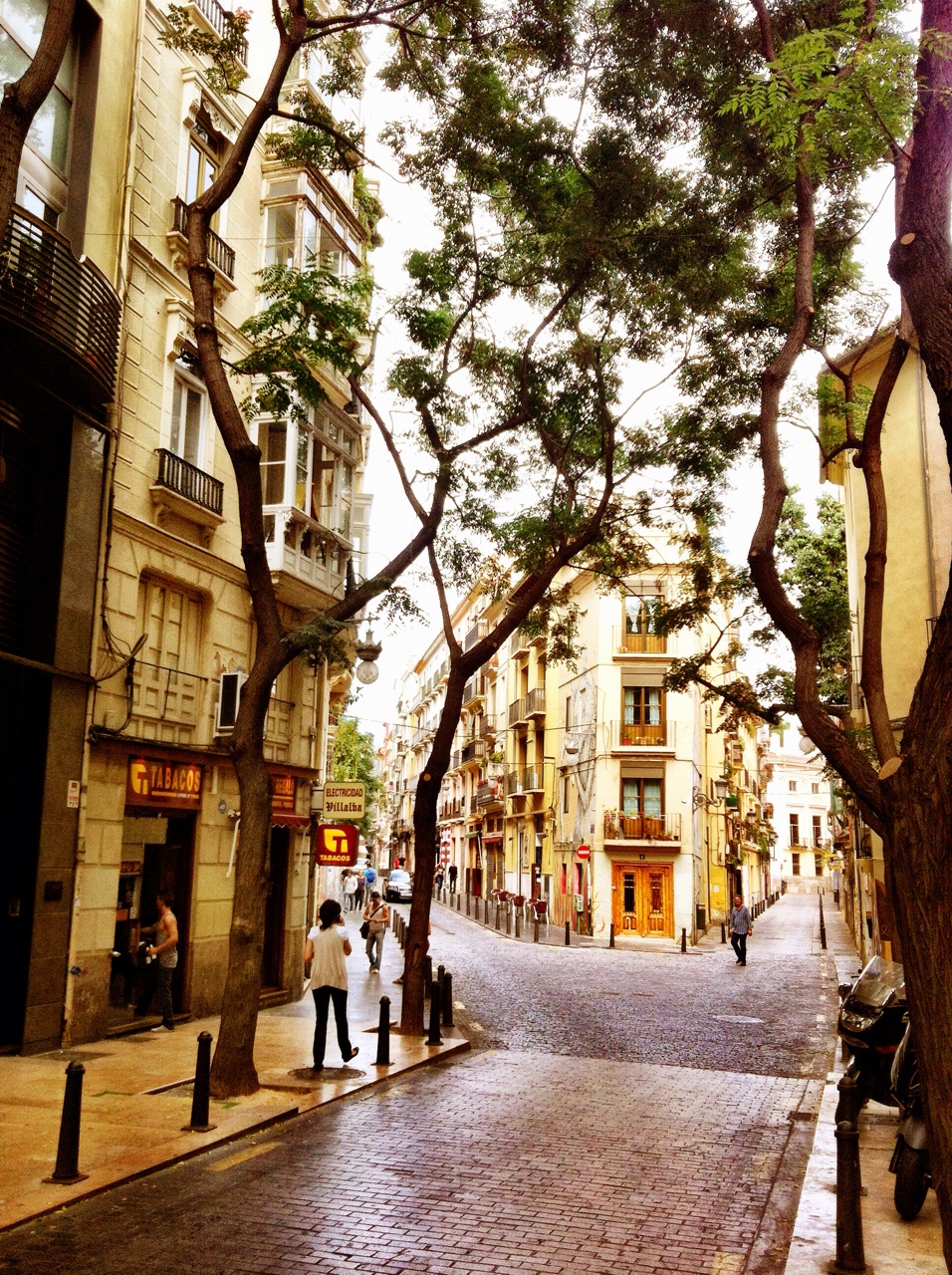 After I returned my bike, I strolled aimlessly through the darkening evening streets with absolutely no plans or plotted destinations. I stopped at a terrace next to a quiet fountain called La Cava del Negret, ordered a vino tinto (shocking, I know) and took out my notebook to write. Just a moment later, I looked up to find a tiny, old woman with sparse white hair, a floral dress she kept tugging over her knee and a string of pearls tied daintily around her wrist. She and her little “perro” (dog) had helped themselves to a seat at my table. I glanced around at all the other empty tables, rested my hand on my purse, and greeted her. Although my Spanish is not all that fantastic, I understood bits and pieces and she chatted on to me. She told me just needed a quick break before continuing home from walking her dog and she saw that I was alone and she was alone and knowing how much women like to talk, thought she would sit down so we could share a little conversation. Of course this seemed odd to me, and is definitely not common practice in North America, but I had never been here before… maybe this happened all the time? Or maybe she was trying to pickpocket me? No one had really warned me about this in Valencia, though, so I wasn’t sure if it was a big problem like in Barcelona. But she seemed to know her dog, and he knew her, and she did have house keys with her. And if everything was absolutely true and her intentions were absolutely pure, then what an adorable moment this was. I tried my very best to keep conversing in my very best Spanish, although even when I understood what she was trying to say, my responses were basic and laboured. She asked if I liked being alone and I said I didn’t mind and suggested that perhaps it was better that way sometimes. She said that her dog was her companion and we both laughed and said he was probably the best kind. She said 100 times that it was hot out. And I told her I had a flight tomorrow to Malta. She repeated a lot of things, which could have been due to her aging memory, or perhaps she was trying to kill the silence and not strain my limited Spanish skills with too much. If so, how kind of her. And since I’ll never really know, I’m going to think of it that way. After about 15 minutes, she bid me goodbye and continued around the corner with her little dog, for home, and I couldn’t help but grin. What a sweet way to begin my final evening in Spain.

One thing I had in mind for my night was making it a late one — as I had a 430am alarm set for my flight to Malta and if you know me, I am a VERY deep sleeper and have been known to sleep through an alarm a time or two. Or a raging party. So I didn’t want to risk missing this flight, which I knew would be probable if I went to sleep at all. My plan was simply to stay up all night. Great plan, right?

After the second wine stop, I realized I needed some kind of entertainment to keep me going. The receptionist at the hostel had encouraged me to join up with the nightly pub crawl, carefully avoiding the questions about whether or not it would be pubs or clubs, but ensuring me there would be five free shots included with my five euro ticket. His eyes lit up with excitement at mention of these shots, while I wondered if I could exchange those shots for wine. This should have been my first clue I may have been too old, or at least not in the right head space for this pub crawl, but I reluctantly agreed and thought about how it would be terrific to socialize a little, and see a bit of the city as we “crawled”. As well, I could always branch off on my own or leave early if I was having a terrible time. I was hoping and praying we may end up on some beautiful terrace, sipping wine and listening to live Spanish guitar. I had been hoping to uncover a place like this the entire trip actually, but the problem is, I’m not sure if this really exists or just in my mind.

Let me give you a hint: we did not end up at a place like that.

The first place was nice. It was a lounge of sorts, and we finished cups of sangria (instead of a shot, yay!) and chatted within the group of maybe 12 of us. I met a Spanish girl called Diana who was my age, and ended up hanging out with her most of the night. The next stop was a club, with loud trance music and empty dance floors, and there, when I asked to exchange my neon blue shooter, I was denied. And so, I drank it. Down the hatch.

Now, you must be wondering if and how I made my flight! Well… 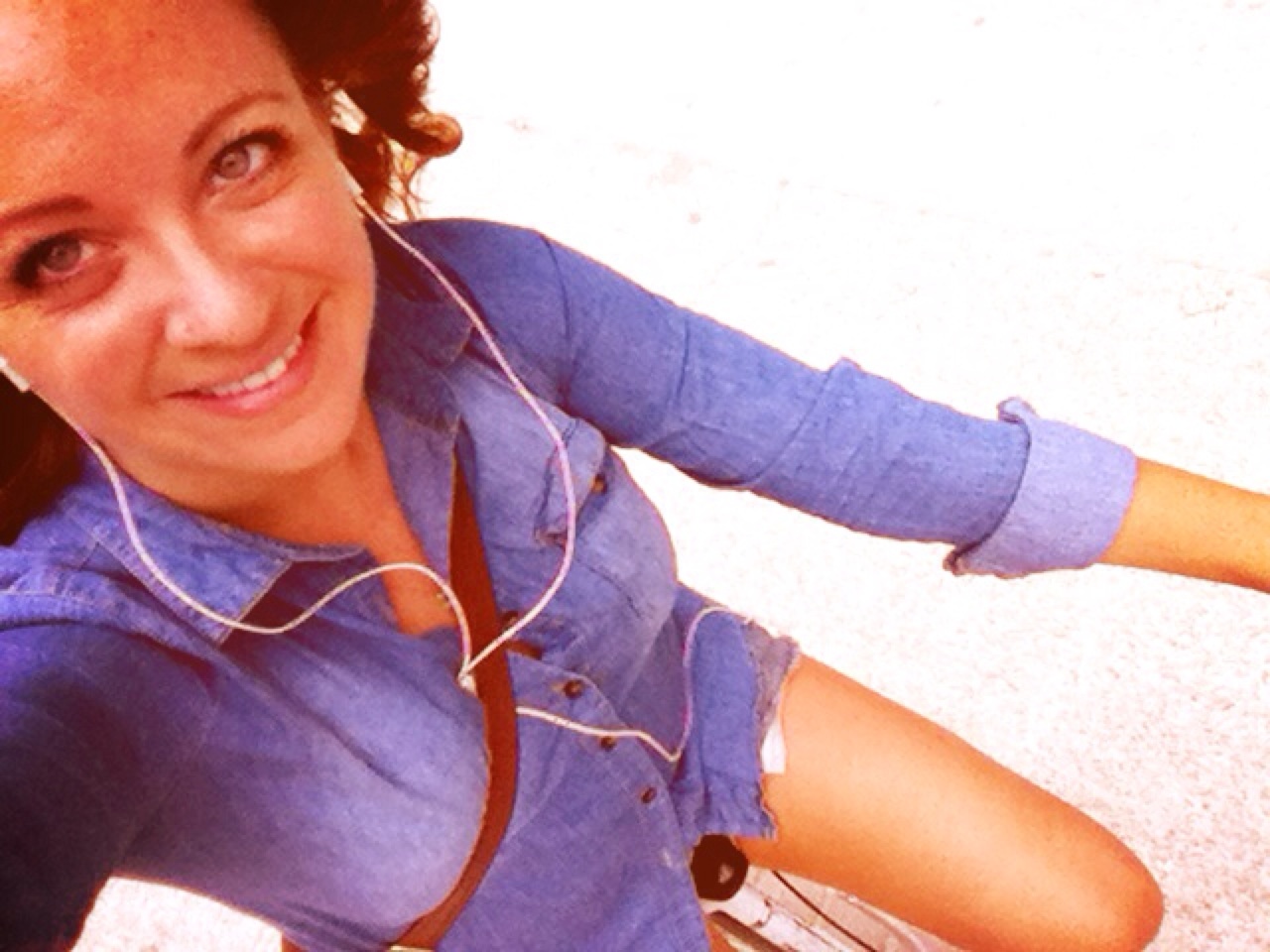