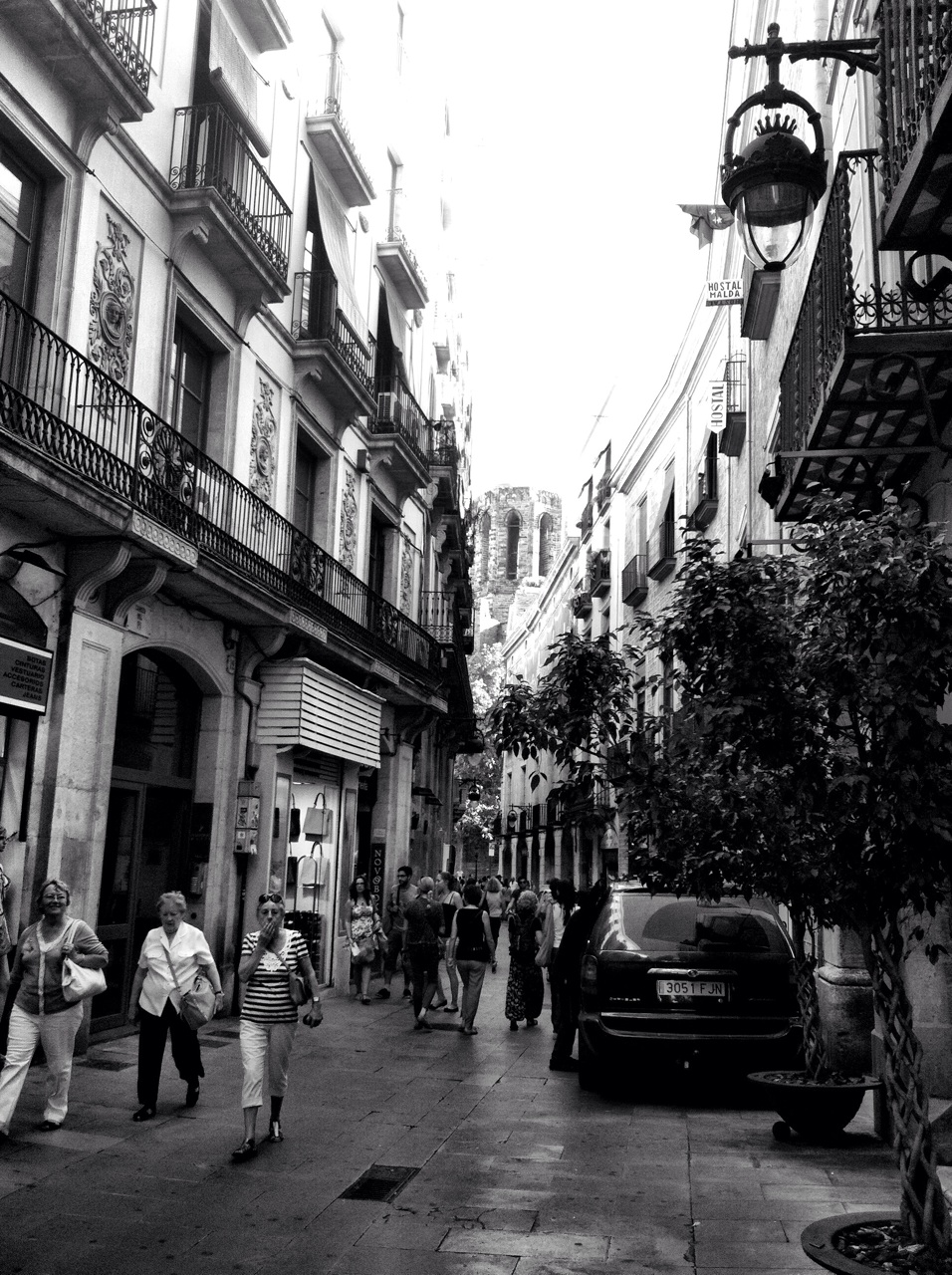 All I had to do was print my stupid ticket. I had shown up early. I managed to not get pick-pocketed on the metro. I had pre-booked my train ticket online. The day was actually going fairly smoothly considering I was suffering from extreme exhaustion as a result of my late night wine and pyjama party that lasted until nearly sunrise. I even slept in and checked out late. Fail. But I’d really turned the day around! And there I was at the train station, 20 minutes early, and all I had to do was print this ticket. Easy, right?

Well, you’d think so. But rather, I stood in line after line, waiting patiently, even kindly allowing a frantic passenger, late for her earlier train, to go ahead of me, and each at the end of each line I was greeted by a grumpy, asshole of a Spaniard, completely unwilling to assist me, other than to direct me to another lineup with another grumpy asshole at the end of it. Finally, I tried another self service machine (technology doesn’t glare at you…) and was able to navigate through it and print off my ticket successfully. As I walked toward platform 11 and took my window seat on the train bound for Valencia, I tried to regain my composure and reset my mood. After all, training around is one of my all-time favourite travelling activities, and I wanted to enjoy the crap out of the next few hours. So I put on my positivity pants and cued up a good playlist on my iPod.

At the end of my stay in Barcelona, I have to say, I think my review would be one of “disenchantment”. While it was definitely a 10/10 for shopping and Gaudi really did impress me, the city didn’t inspire me the way I’ve been inspired before. I was chatting to my friends about it last night over cup-fuls of red wine. (Through the power of social media, I had ended up meeting up with two flight attendants I work with back home who were also in BCN on holiday! Fun!)

I should’ve known really. Rarely, if ever now that I think about it, has a big city of any sort really found it’s way into my heart. While I’m definitely a city girl (I promise you I know absolutely nothing about farm animals or hay or telling time by the sun), the places that have really tickled me pink during my travels have been the smaller ones. Not necessarily a town even, but I’m talking about metro-free, population under 300,000 kinda cities. Where I can feel the charm almost immediately. I just feel like in those places, the city as a whole has a very distinctive personality and you can really get to know it, like it were a new friend you found yourself seated next to at a dinner party, and ended up chatting to all night. Whereas with a big city it’s more like the feeling you get from the whole group at the dinner party. While you can come away and say you had fun or they’re an interesting or classy or funny or boring group of intellectuals or snobs or hippies or whatever, you can’t describe the group as intimately as you can describe that one person you connected with sitting next to you.

I feel the same away about Barcelona as I do about Buenos Aires. Or probably a lot of other big cities I’ve visited. Like Dublin. Or Marrakech. Or Bangkok. Would I go back? Yes. Could I have fun there? Yes. Am I glad I went? Yes. Are there interesting things to do and see there? Yes.

Did it inspire me?

A few things I will say if you do decide to venture out to Barcelona (and honestly, you should… I would like to go back for a day or two of shopping before heading down south to Granada next time, I think):

1. Stay in the Gothic Quarter. That was my favourite bit. Narrow, stone streets with no apparent pattern to them at all, stemming off and around the cathedral, that make you feel as though you’re wandering through a maze from another century. Because you are, I suppose. Go get lost in them. It’s wonderful. And while we’re talking locations, avoid Las Ramblas, that main vein running through the city. It’s much less fascinating and much more of a tourist trap, so unless you really need to stock up on your fridge magnets or you simply prefer to pay double the price for your glass of wine as you would elsewhere, use it only as a frame of reference when taking down directions. That’s my suggestion, anyway.

2. Eat at Taller de Tapas. It’s not necessarily the cheapest, but not the most expensive either. And the food is GOOD. Sit outside, even though everywhere in Barcelona charges an additional 10-15%25 to eat on their terraces. Do it anyway. The nights there are lovely and warm. Enjoy them. Order about 1-2 tapas per person and share. Be open-minded and try something new. My favourites were the asparagus with walnut dressing and the sizzling garlic shrimp. Buy the whole bottle of wine. The wine is cheap compared to North America. And if you’re lucky, some local musicians will wander up and add some ambience to your evening. When they’re done, tip them. Music is wonderful and it makes the whole experience more magical, and they’re creating it for you. Support that. It’s awesome.

3. Do bring money for shopping and be sure to leave some space in your luggage for your amazing new things. The shopping is mostly near the Placa Cantalunya area and there is a lot of it. (An excess really… I found two H&M’s and two Zara’s all on the same street.) And prices are reasonable. Oh, and make a stop in Oysho and buy yourself a cashmere sweatsuit. It feels like you’re wearing a cloud. If you don’t follow me on Facebook, I have been debating this cashmere purchase for my entire four days in the city and even put the question out via social media and it was unanimously supported. Because, everyone deserves a cashmere sweatsuit. So go on.

4. Check out Gaudi’s stuff. It’s really amazing and totally unique. If you just want an affordable afternoon activity, do the bike tour we did through http://freegaudibiketour.wordpress.com/. Rudi is awesome. Just be forewarned, you don’t get to enter into any of the buildings on this tour, which we didn’t know. So just decide how much you want to see, I guess. If you want to get inside, buy tickets online to avoid lineups and give yourself time. Especially for the Sagrada Familia. And if it’s not really your thing, at the very least, take a stroll north off Placa Catalunya on Passeig de Gracia with your eyes peeled and let it surprise you. Because it will. 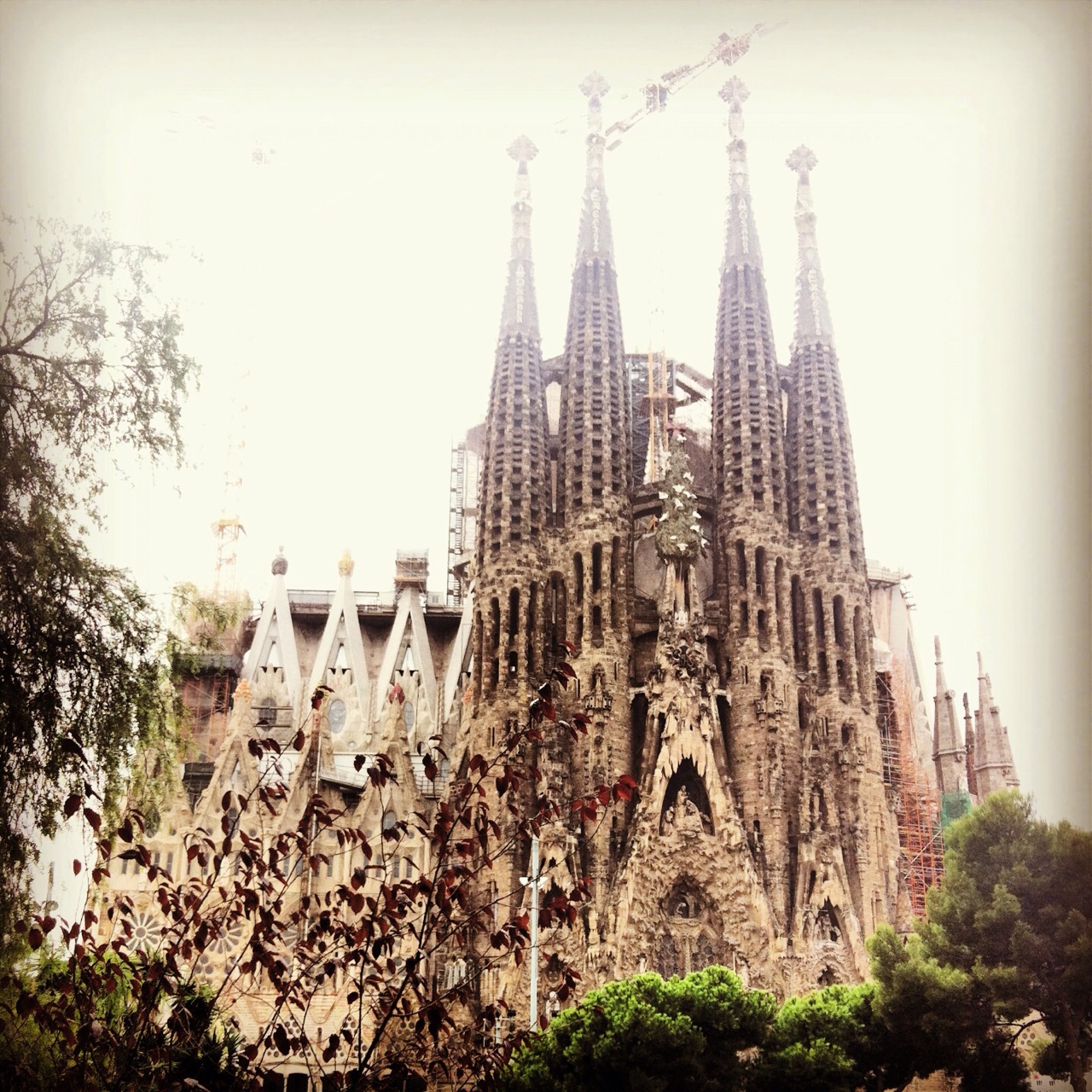 5. If you do the paella cooking class, know that it’s not a hands-on cooking class. (We did the one through the Travel Bar: http://www.travelbar.com/) I’m not saying don’t go, because we did and we had a great time, and the food was delicious, so long as you’re fine with not actually cooking anything. It’s really a darling Argentinean guy named Fernando leading you through the market and then demonstrating how to make a paella in front of you, which is very cool, and then sending you home with a link to some online recipes. So you decide if that’s for you or not. (If you’re anything like me, you would probably rather watch someone else cook for you anyway and avoid completely ruining the food for yourself and potentially everyone else because you’re a complete failure in the kitchen. But who knows!) 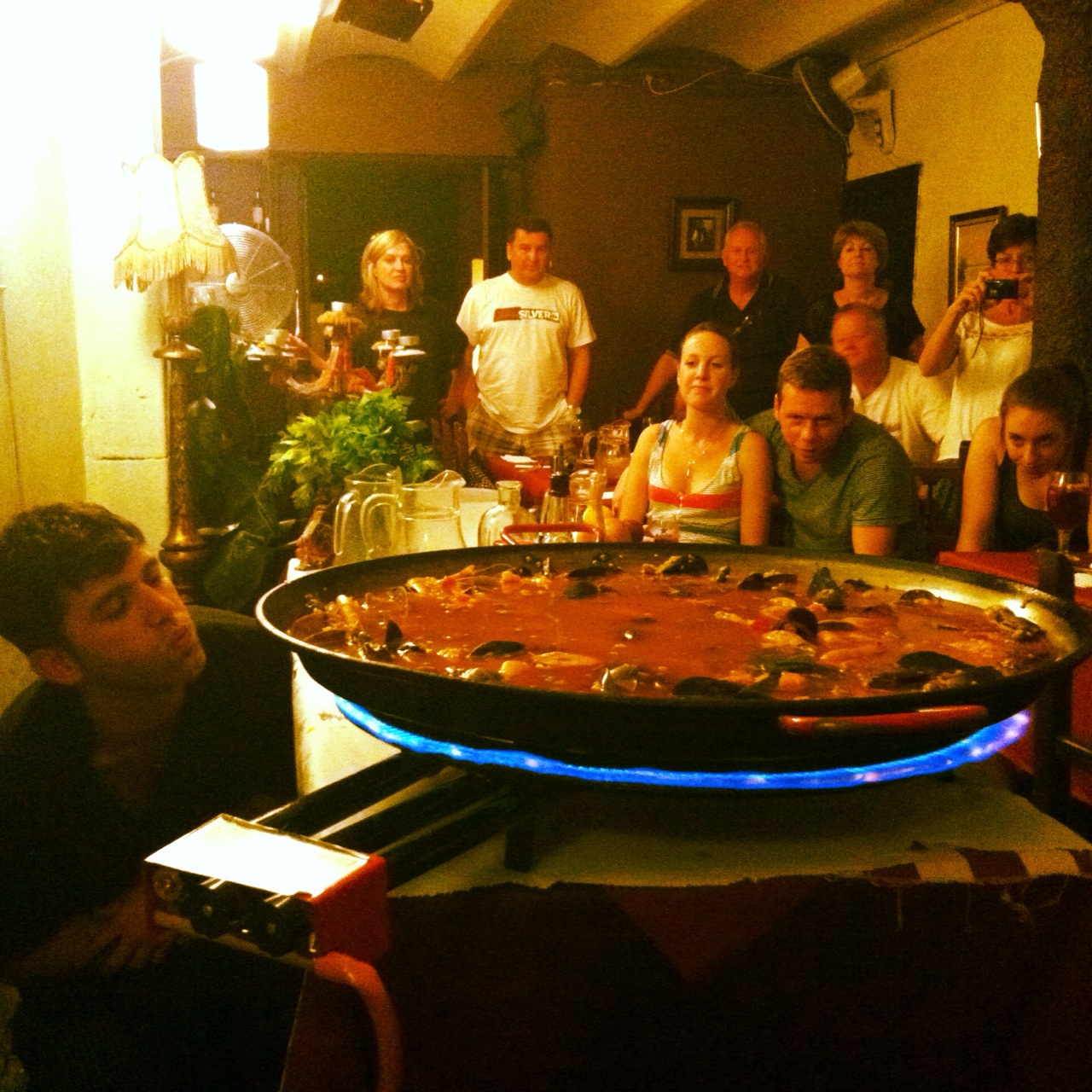 6. Don’t forget about the beach! I kinda did. It may be man-made (trivia for you…) but it’s nice. And even at the end of September the weather is absolutely nice enough for a beach day, so take one. The area around it is called Barcelonetta, and I recommend popping into the Surf House for a fresh smoothie while you’re there! (http://www.surfhousebarcelona.com/)

7. Don’t tip like you do in North America. Tipping is not really a thing in Spain. That doesn’t mean you can’t do it, but maybe save it for when you encounter some really exceptional service. And in my experience, those instances are VERY few and far between. Just saying.

8. Make sure to eat some honey-flavoured dishes. Like honey ice cream at the end of your three course lunch (called Un Menu de Dia… a set lunch with a set price and some options). Or there is a salad with cheese and honey and balsamic and it is to die for. I officially need to start incorporating honey into more of my cooking at home – IT’S SO GOOD! Oh wait, I don’t cook… 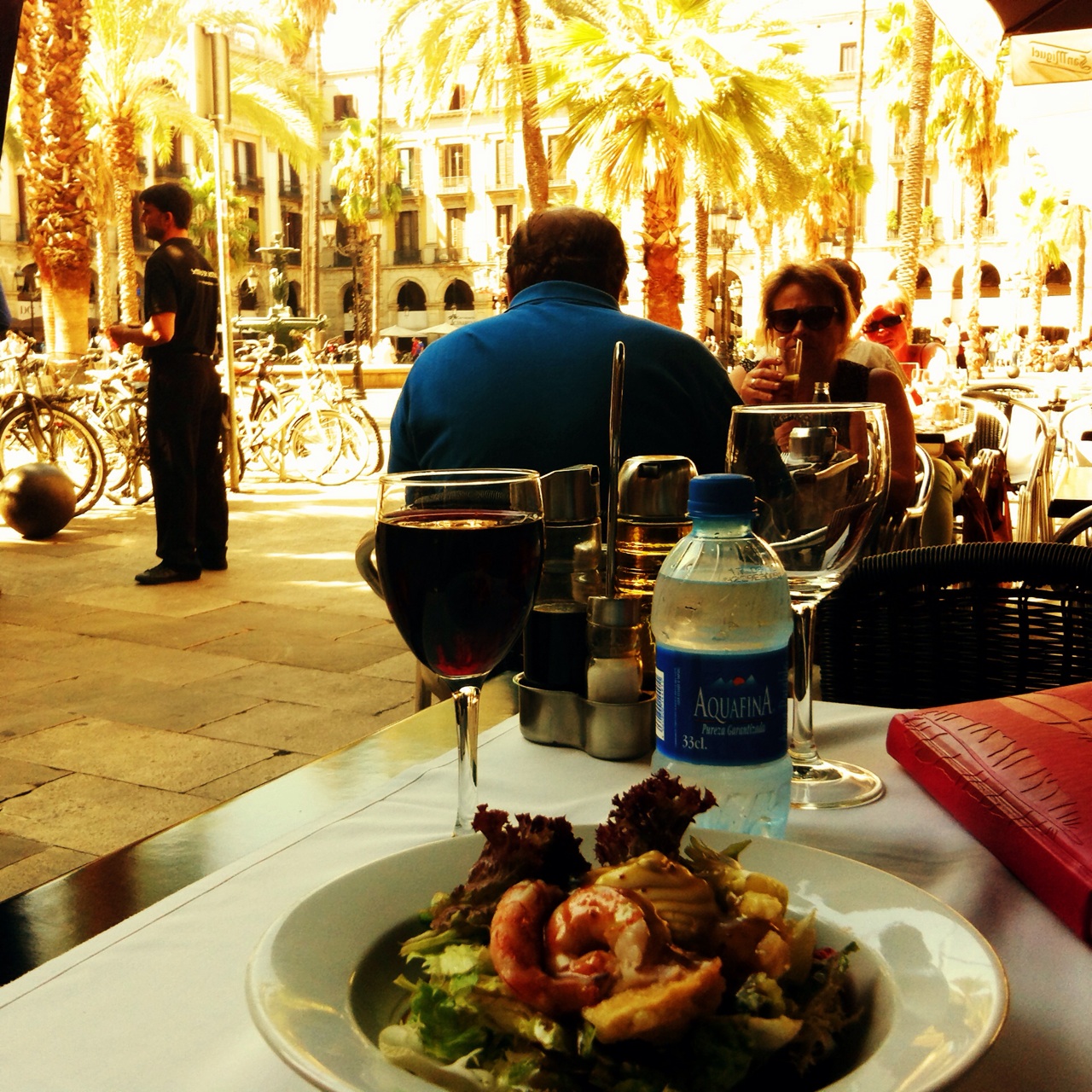 9. Avoid walking during hot afternoons. Wandering around in the evenings is lovely, but even in late September the days are hitting about 26 degrees Celsius, so I did find myself in constant search of shade and/or a breeze. And if you can find both, JACKPOT. Absolute jackpot.

10. Take someone with you! This city is big and busy and it’s not necessarily the easiest to meet people (or maybe I’m just starting to realize how anti-social I’m becoming… uh oh) and it’s nice to have someone to shop with or chat to over dinner. I really do like my own company, but in the end I am so happy that I ran into Jen and Usha, the flight attendants I mentioned, or I would’ve been lonely, I think.) But maybe that’s just me.

Alright, well it’s time for me to get out of the big city. Writing this, I’m sitting on the train, looking out the window onto the coast, and am already liking what I see. Valencia is up next! Bring on the inspiration, please, with a side of wine.