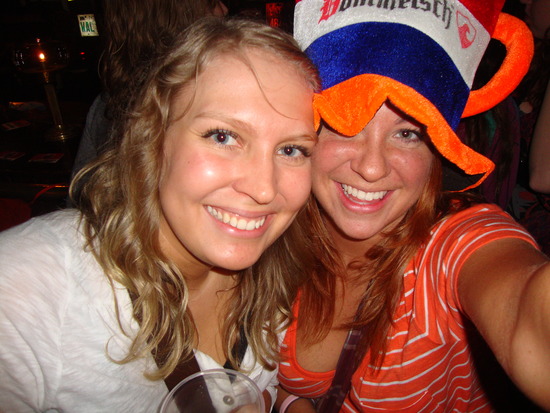 Queen’s Day. In Amsterdam. An experience everyone should enjoy at some point in their lives. There is just nothing like it. One of, if not the most amazing parties I have ever attended.

It all started Thursday night actually. After arriving and changing out of our 24-hour long smelly travel outfits, we threw on our orange tshirts, grabbed a map from the reception desk and began to navigate our way through the city. It was spitting rain almost immediately and our fresh, clean hair was quickly loosing shape. We walked fifteen minutes or so into Leidsplein – a busy square downtown, lined with bars with a stage and beer gardens set up in the middle. The Queen’s Day celebrations had begun and would continue on until the wee hours of Saturday morning. We grabbed our first (of many) beers from a vendor on the street and swayed alongside the towering tall Dutch people to the cover band on stage singing along to Radar Love. Spitting soon turned to pouring and without an umbrella we were soon soaked all the way through. Not too mention our beers were quickly becoming very watered down. We ran for shelter into the Three Sisters pub on the corner, where we met a group of travelers from another nearby hostel. 2 Canadian girls, 2 American guys and one Brit decked out in bright orange overalls. Together, we took on the town. Dancing, overflowing beers, laughter, orange, orange, orange, more dancing. Around 3 or 4am we stumbled towards the nearest restaurant and sat down to enjoy our first meal since the plane (eating has been pretty low on the priority list thus far, haha). We devoured delicious shwarma and some french fries with mayo – in true Dutch tradition. The Dutch absolutely LOVE their french fries and mayo. Everyone is constantly eating them. It’s incredible how they all stay so thin and lovely. Great genes, I guess. 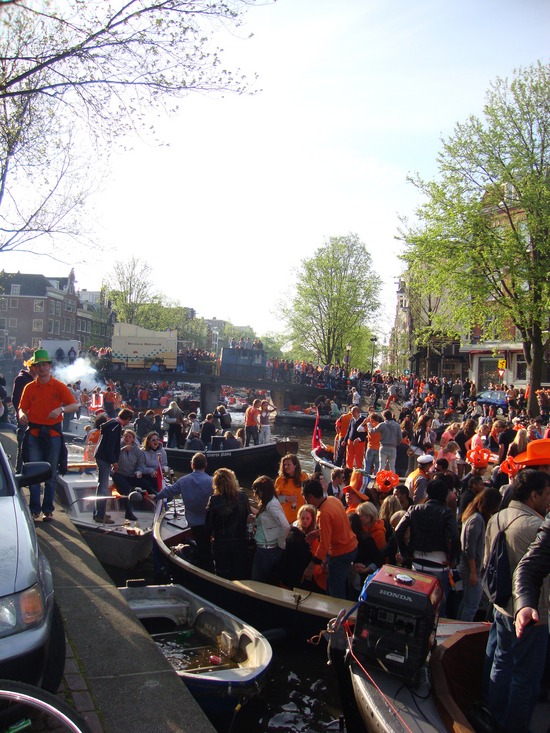 Walking home. So, I’m pretty great with directions. I can get my bearings fairly quickly in a new place and once I’ve been there once, I don’t forget the way. So we head for home completely confident in our navigational abilities – which really are exceptional. What we didn’t anticipate is the impact our excessive alcohol consumption would have on this experience. After what we later realized was over an hour of walking, including a quick stop for some pink cotton candy (an obvious late night snack?), I questioned the route being this long. We tried to locate ourselves on the map and ended up asking three Dutch men passing by. After hearing where we were attempting to get to, they burst into laughter and asked how we ended up there! Apparently we had missed our turn off and walked over an hour in the wrong direction! We turned around and started our walk back. At some point we met a rikshaw driver who was off duty and took pity on us with a ride home. A ride that also resulted in a bike-rikshaw collision. But alas, we made it back to our beds around 530am safe and sound. Ahh, Amsterdam.

Friday I woke up to Shai’s bright and excited face, so ready to hit the city again. I dragged myself up and threw on another orange shirt and we left for Queen’s Day. So Queen’s Day is the queen’s birthday. Everyone wears orange and essentially there are no laws for a day. The entire city just parties. It’s so strange to see. There aren’t that many events – a few concerts – but mostly it’s just as though everything becomes a dance club. DJ’s set up in the side streets and people pack in (the craziest crowd I have ever been in) dancing and drinking and spilling beer on one another. The city grows from 900,000 to 2 million for the day, and everyone is outside. And everyone is drunk. The canals were littered with boats blasting trance music and full of partiers. Stages had been set up in the big plazas and there were free concerts all day long.

All the stores in town were closed but some food stand was selling 6 packs of Heineken on a side street. We picked up a couple of those… and spent the late afternoon and evening, about 5 or 6 hours in total, just walking around the city, taking it all in, sipping our beers. We kept walking and walking thinking eventually we would exit the core centre and the crowds would die down, but no. The party seemed to continue on endlessly. Every time we thought we found the end, we’d turn our heads and find a street packed with people. It was a sea of orange. It was absolutely amazing to see. We wound up back near our hostel at Museumplein just before it got dark. The park was set up with a massive stage and a crowd that seemed to go on forever. We head into the thick of it to find out who was playing. None other than DJ Tiesto. What an incredible show. We met our first Dutch friend, Mike. The tallest man I think I have ever met. We finished the concert with our new friend and followed the crowd back to Leidsplein to drink and laugh and dance into the night. Another night that brought us home around 6am, but this time, we didn’t get lost.

If you’ve never been before, book some time off and go to Queen’s Day next year.