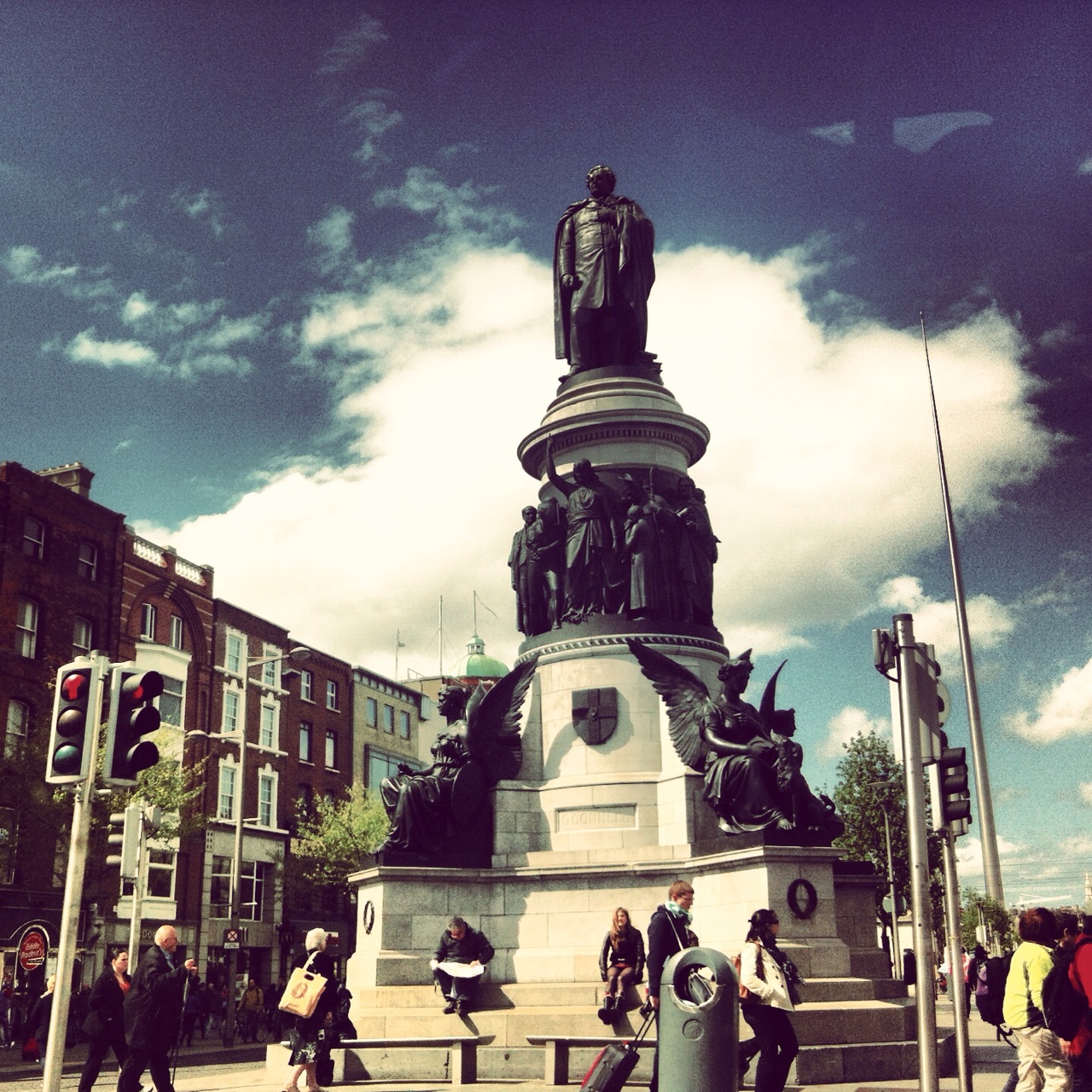 Dublin was our final stop.

Kaley had a couple of friends in Dublin that she had met traveling in Australia years earlier, and one them, a chef called Paddy, had offered to put us up during our short stay in the city. After the 3 hours on the bus, most of it spent trying to meditate away the sensations of our bursting bladders, no doubt a consequence of the breakfast mimosas and baileys and coffee we had started our day with, we were dropped off on a busy city sidewalk, luckily next to a hotel with working bathrooms, where we were able to relieve ourselves before any unfortunate accidents occurred–thank goodness! We took a taxi to the address Paddy had provided and unloaded our 13 bags (yes…13) to the street in front of his building. Paddy was actually at work and was going to bike home to let us in on his quick break. Because we didn’t know exactly what time we were going to arrive and because Paddy didn’t have a smart phone, this was a most complicated endeavour. We had orchestrated a plan where we would find some wifi upon arrival into Dublin (tip: loiter around hotels or cafes checking for a signal) and from there message Lauren (Kaley’s other friend who lived in the city) who then would text Paddy from her Irish number to head home to meet us whilst we cabbed to his place. And hopefully, the timing of all this would unfold perfectly.

Well, that was the hope, anyway. 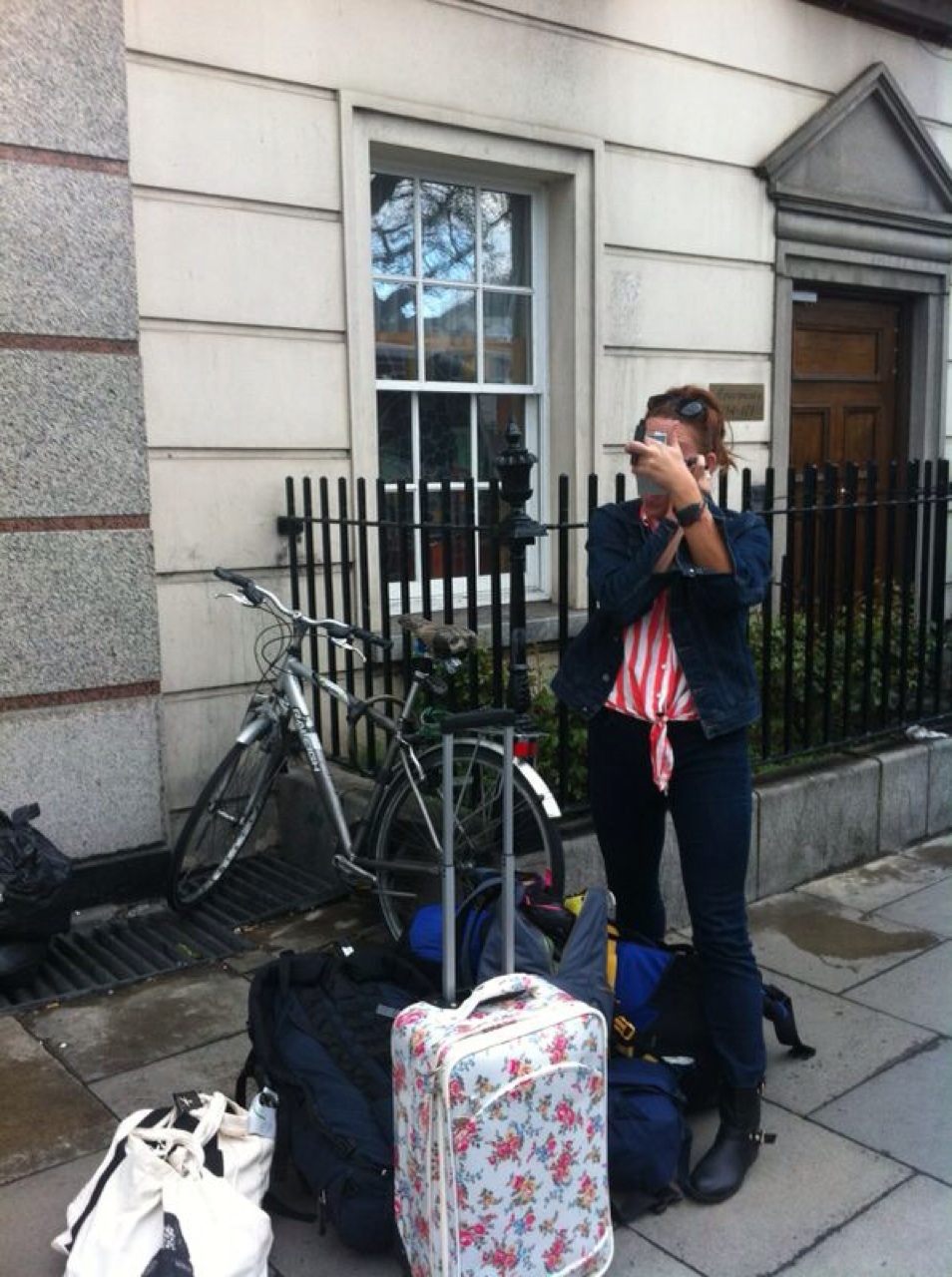 But the reality was our first few hours in Dublin were spent camped out on the sidewalk sitting on top of our 13 bags in front of a big intimidating apartment building on a very quiet street (not even good people watching…). And no wifi. Sounds terrible? Well, perhaps it would’ve been on another day. But in our third week of this trip we were well adjusted into travel mode and weren’t at all bothered. We busted out out mini travel speakers, leaned back onto the concrete and just sat. You learn quickly that this sort of thing just tends to happen when you travel, and you really need to be able to just go with the flow. Wait. Sit. Sometimes, it can be sort of peaceful. And when the waiting ends and you see that little Irish guy cut around the corner on his bike, grinning at you, with keys dangling from his pocket, it’s all grand once again.

So yes, Paddy made it eventually. And let us into his beautiful modern apartment, handed us the keys and biked back to work, promising to meet us later at the pub. We showered away the hangovers from our night in Cork mixed with the stench collected from hours of bus riding and street sitting and then suited up in new outfits from Penny’s. (We were officially out of clean clothes and therefore, simply had to go shopping to get ourselves through the final couple days. And no, we didn’t consider a laundromat.)

We navigated our way downtown using the local overground train, which seemed confusing and overwhelming after the little cities with cobblestone streets we’d simply wandered around previously. Where were those good ol’ Irish directions when you needed em!

If you didn’t know, the Irish give obnoxiously detailed directions. It’s hysterical. You’ll ask someone how to get somewhere and it will go a something like this:

Now, ya see that wee yellow house right there?

The one with the ollllllld wooden door with the stained glass in it?

That stained glass is just lovely, isn’t it?

Well walk to that house.

Then when you get there, look left. You’ll see a street.

Ok so wander maybe… A few steps down that there wee road. It’ll take a slight curve to the right and you’ll be spottin a few wee shops. One my uncle owns. It’s the best tobacco shop here in town. And don’t let anyone tell ya different. I don’t assume you gyeerls (girls) like them cigars much though?

Right then, so carrying on. So you’ve passed that tobacco shop owned by my uncle. And the road is curving right. And just past there you’re gonna see a big fancy church on your right. This towns famous for it. But yer gonna wanna look on the other side of the street there.

And there will be a shop with a red door.

So it’s not that one. It’s very near though. Can ya count, gyeerls?

Yes, we can count.

Grand. So yer gonna wanna count tree shops down from the shop with the red door. It’s the one with the blue door.

You gyeerls got that then?

… We walked up, turned left, walked half a block and we were there.

But… It’s part of their charm really. 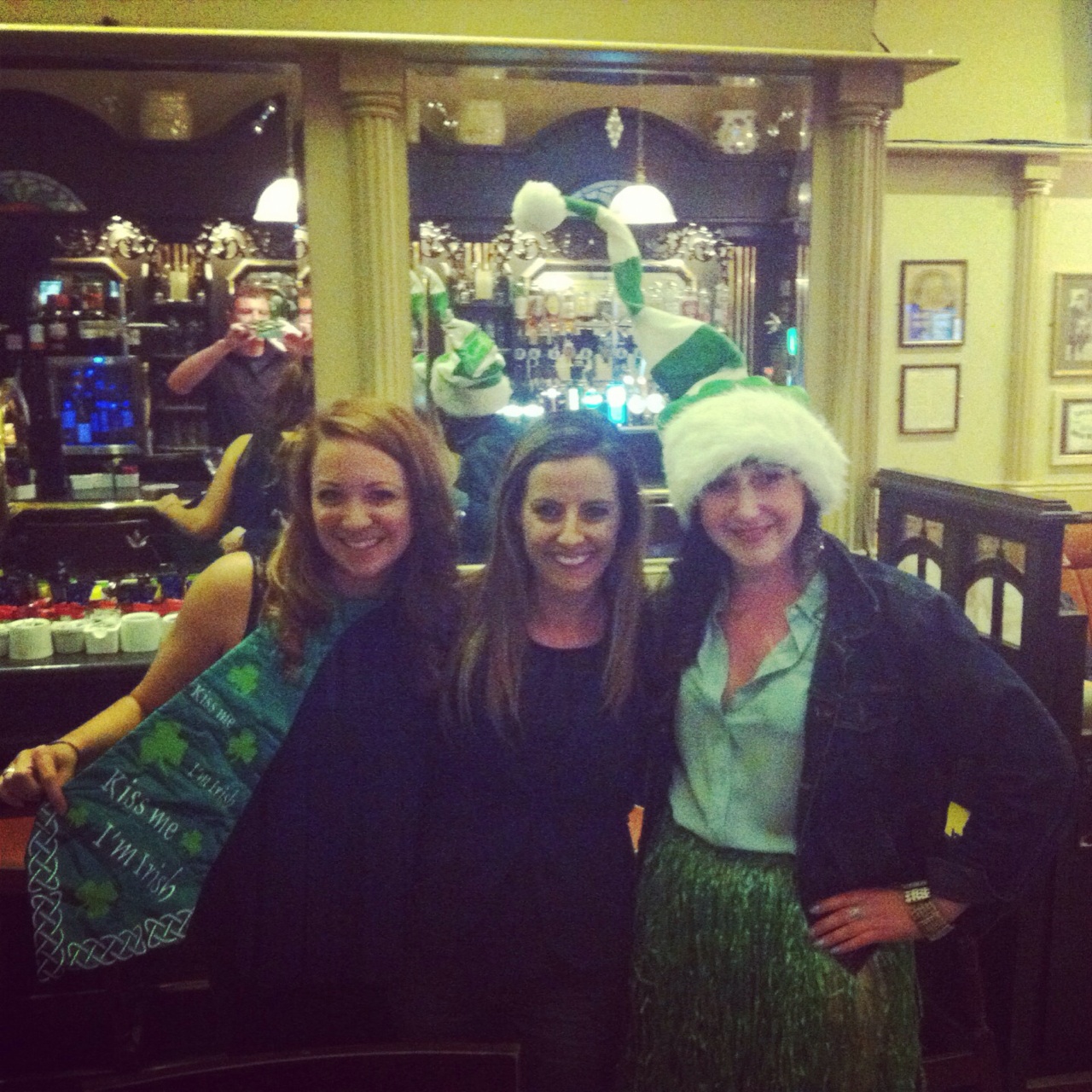 Our last night in Dublin (or my last night) started off with us successfully meeting Kaley’s friend Lauren in a pub on some street. I know, you feel like you were there, right? I’d heard tale after tale of Lauren… Apparently blessed with a personality that jumped right out at you and assaulted you with love, laughter and offside jokes. And she didn’t disappoint. We all sat inside, got acquainted (or re-acquainted in Kaleys case) and pounded back a bowl of traditional Irish stew. (Lauren was appalled to learn we’d yet to have one this far into our trip.) We gushed to her about how in love with Ireland we were. It’s charm. It’s people. It’s stout. And it was then I realized how terribly upsetting it was going to be to leave the following day. I mean, it was going to be upsetting to leave anytime, but the following day I had a little Aer Lingus flight booked to take to Amsterdam for one last night so I could connect home standby the day after. While Miss Kaley got an extra night in this magical country we’d uncovered.

But really, at this point, what was there to do? Besides forfeit my flight to Amsterdam and book a full fare confirmed flight on Air Transat 2 days later and fly home with Kaley. But that would’ve been crazy… Right?

Well… Crazy or not, that’s what I did. I couldn’t help myself. I had fallen hard for Ireland. And I simply had to stay another night. It was a desire I had no real control over. Had to be done.

Well… I’m sure you all know what falling in love is like. And when it’s a country full of people you’re in love with, the force is just so strong.

Let’s be honest, the Guinness was a-flowin.

We did make it out to the Guinness factory the one day. It’s 7 floors of exhibits in the shape of a pint glass, nothing authentic, or terribly interesting to be honest. But the glass we had at the top, along with the panoramic view of the city, was almost worth the 16 euro. Almost. 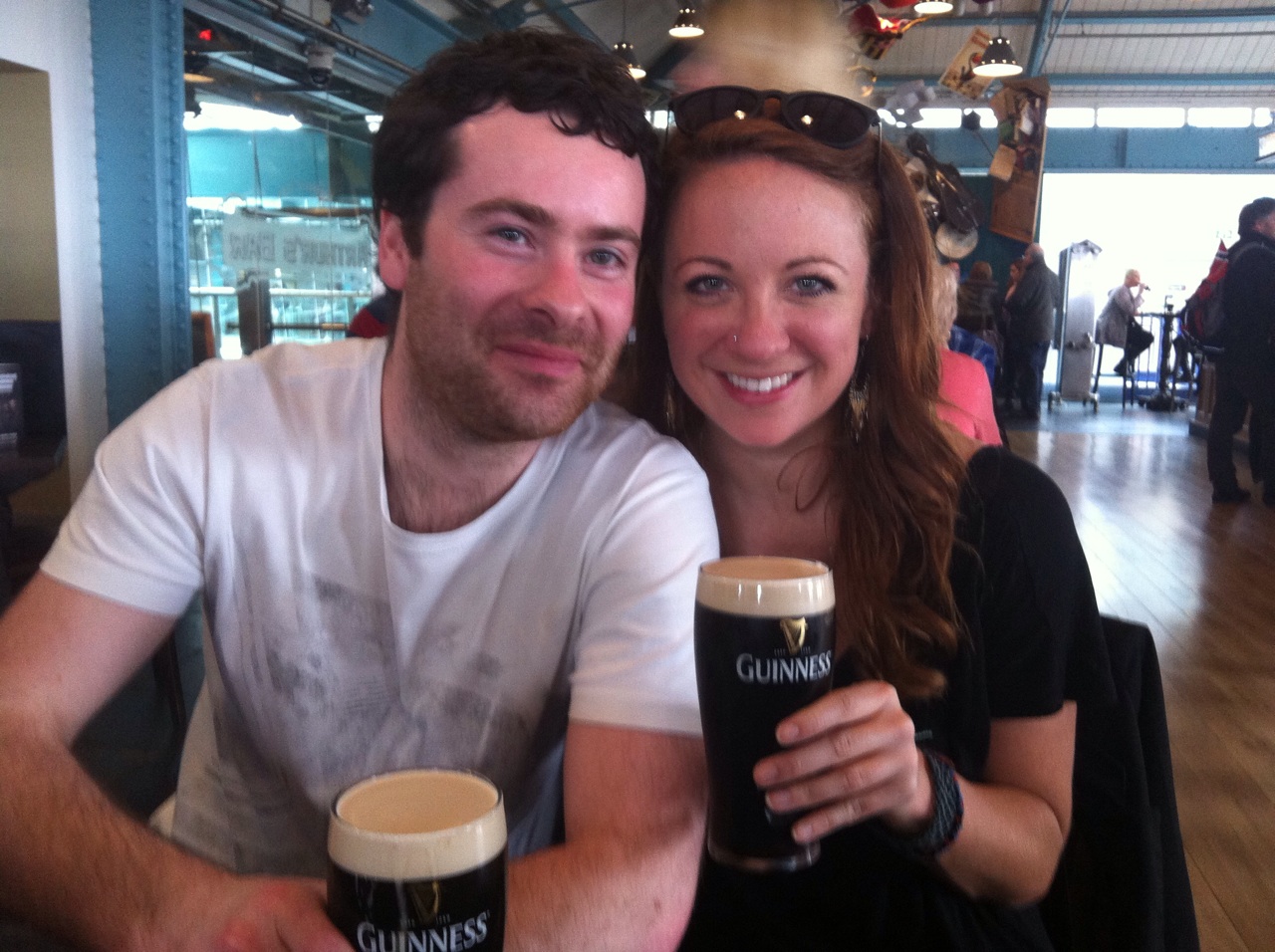 And I must add that the restaurant (5th floor I believe) serves up an excellent Guinness Irish stew you MUST try. Go hungry. That way, even if you’re bored with it all, you can enjoy a nice meal and a spot on pint of the stuff that you’ll never forget.

On our last day, Cacks dropped us at the Dublin airport and squeezed all the tears from us with big Irish hugs. We checked in, went through security and found two seats at the airport lounge (which was a pub, of course) and ordered our two final pints. We sat there in silence mostly. I think we were both afraid we’d cry if we talked. I’d never felt quite like this leaving a place. Ireland was it. The absolute very best in all the world, so far as we’d seen. It was absolutely magnificent.

As we sipped the foam from the tops of our glasses, the only glimmer of hope in our eyes was knowing, with absolute certainty… We’d be back.

Thanks everyone for following along! I’m soooooo sorry it took me so long to put the final touches on this one. I’m happy to report Kaley and I already have our next trip to Ireland in the works. Stay tuned! Until then…. Sláinte!

Thanks for being the best!