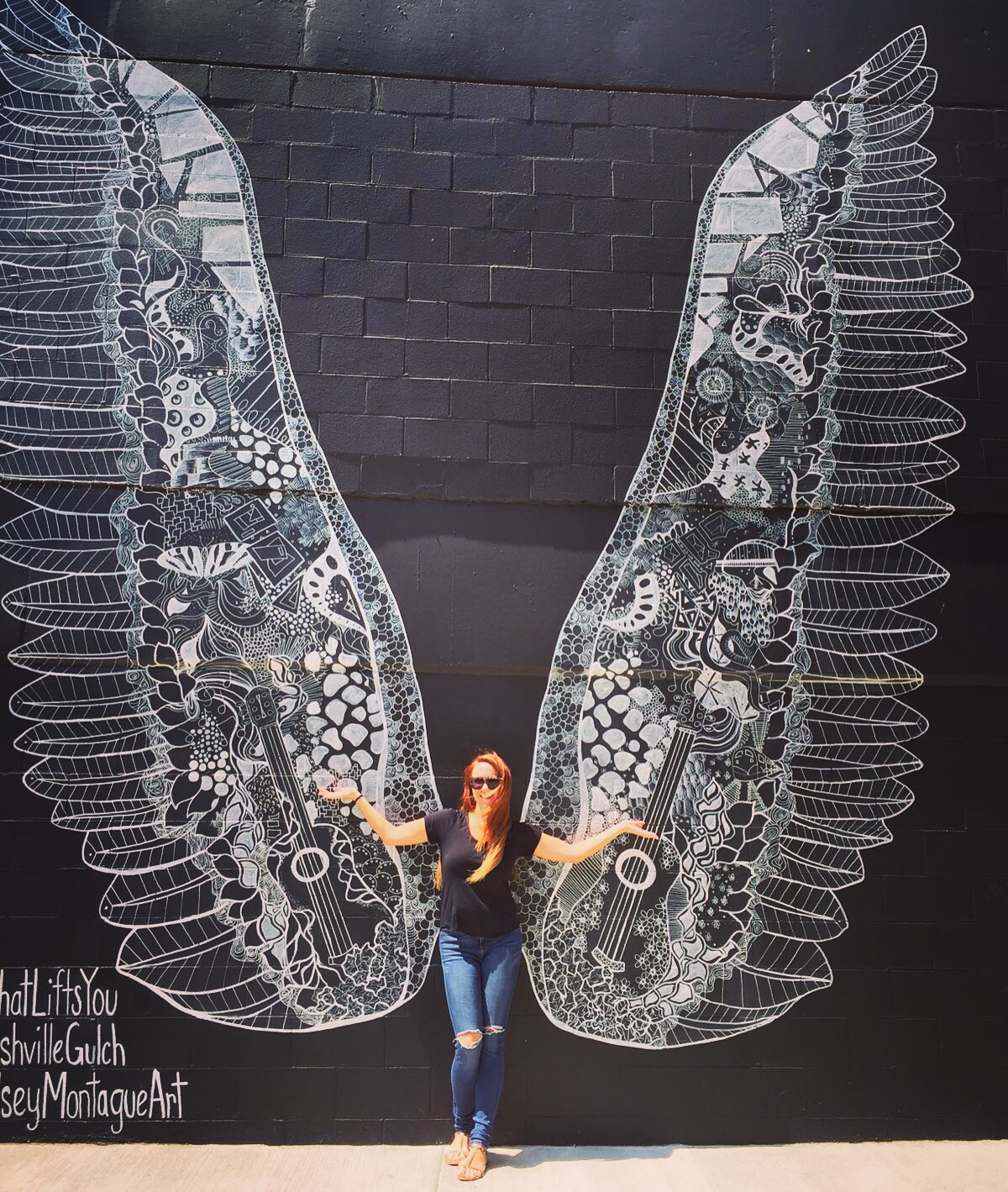 It’s exactly like you imagine it will be. Cowboy hats, fried chicken and music everywhere. The people are friendly. The city is clean. And the accents are contagious. (I swear—before you know it you’re exercising twang with every sentence. You can’t stop yourself. And you really don’t want to.)

Last year, business took me (and my man-friend) to Nashville. As somewhere, I’d never really considered traveling to before, I decided to try and gear up for it and so I started watching the TV show: Nashville to get my head in the game. (That’s something I like to do before I go somewhere to get excited about it—watch TV or movies set there.) I watched three seasons in three months and two things happened: I became an even bigger Connie Britton fan, I started to revisit my once love for country music AND I became increasingly excited to explore this town! I even packed my old cowboy boots I had bought when I was 18. We touched down in Dallas on May 10, our plane navigating the bumpy airspace as we clutched onto our drinks in an effort not to spill on my laptop that was, of course, playing a Nashville re-run to get us in the mood. We had strategically flown in 2 days before the conference began to give ourselves ample time to play tourist.) Upon deplaning, we got the bad news. Those bumps really should have tipped us off. The display screens were all red, declaring, for each and every flight—CANCELLED. That damn Midwestern weather was calling for a possible tornado, and so the airlines had grounded all the flights… until Tuesday.

Now, Dallas is another story all together, so I won’t get to into it except to say, it was a blessing in disguise to get stuck there (and on the very same night one of my favourite musicians, Sufjan Stevens was playing just down the street from our last minute hotel booking). Bottom line for this story is, we didn’t get to see Nashville last year. By the time we made it on Tuesday, and checked ourselves into the Gaylord Opryland Hotel (aka “The Biodome”), we only had time for all work and no play.

This year it was the same conference, same hotel, so we decided to make another go for it. Once again, we booked our flights to arrive 48 hours before any of the work had to kick off, and once again, we sat on the ground in Tampa this time, all boarded and ready to go when the pilot came on the PA to announce a weather delay….

But luckily it only set us back 10 minutes this time. Haha!

We finally got to see the city and it was everything we’d hoped and imagined. We highly recommend making this trip—although it’s a long one if you’re West Coasters like us. And if you do, here were a few of the highlights, along with some tips that might help. 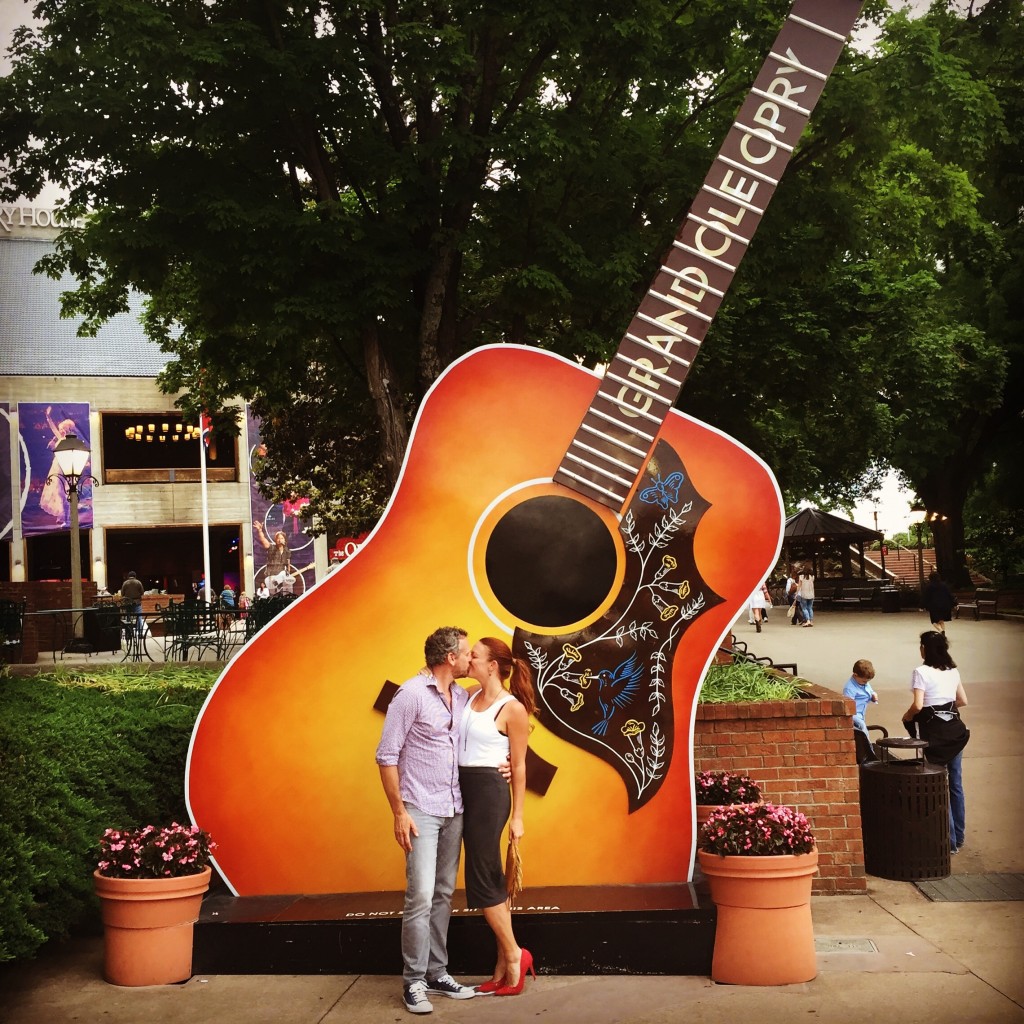 We had been thinking about a visit to the iconic country music venue since we knew we were going back, and it was conveniently located right next door to our hotel (which is out of the way of downtown, unfortunately but only about a 15$ Uber ride *when there’s no surge pricing*), so we kind of had to. Also, the fan girl in me wanted to get inside this place where Connie Britton had been so many times. There are some pro’s and con’s for when to book your Opry tickets, and here’s why.

One thing you need to know about the Opry is the lineup can change on a whim, and it’s very common for someone super famous, and possibly local, to pop in to sing a tune or two, so you can’t really be sure who you’re gonna get (or who you’re going to miss by a day **cough Toby Keith cough Charles Esten aka Deacon of Nashville TV show*).

Also, we saw every level of ticket price listed, so we assumed there was availability in all sections but when we went to book the day before, we found there was only standing room left (which we realized after we got there, meant leaning up against a wall by the exits). We managed to get two tickets on Stub Hub for a bit of a markup back in the balcony, so that worked, but they were the last two seats for less than $100US. It would have been a lot cheaper for us if we had planned ahead and booked earlier.

But alas, pros and cons to each. Tricky hey? 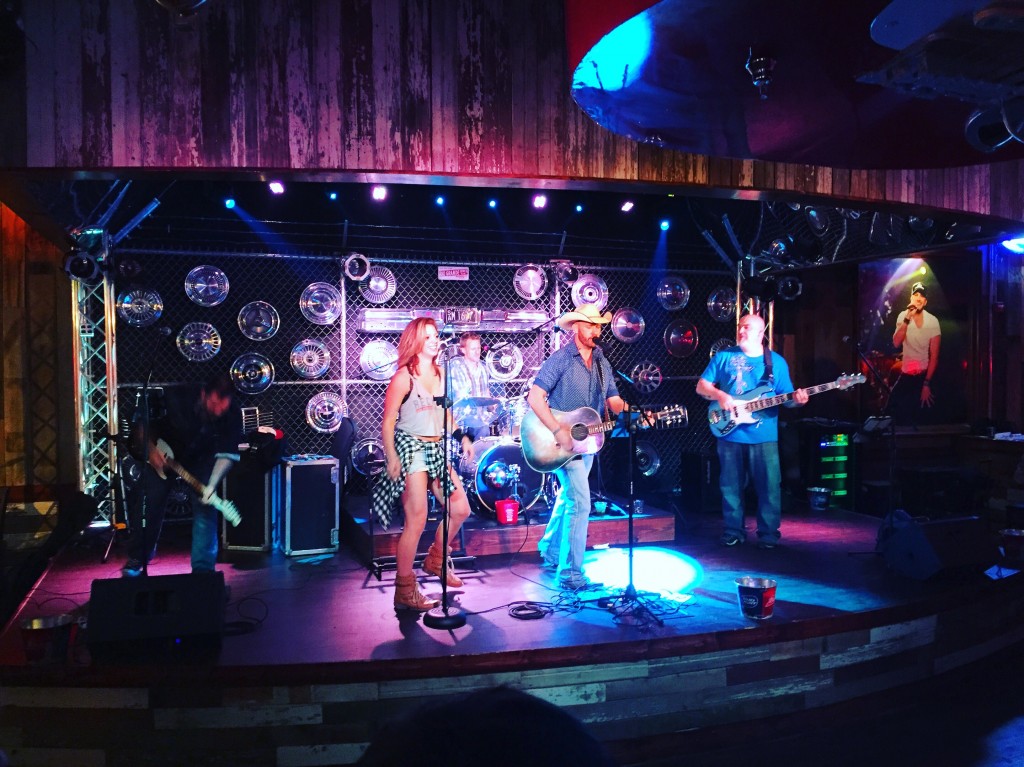 This is the main strip of Nashville—also called Broadway—and it’s lined end to end with bars and taverns and flashing lights. Popular with tourists, and talented musicians trying to get their break (or maybe just play their stuff), it’s crowded on a Saturday, but pulls a crowd any night of the week. The idea here is that you wander up and down the street, popping your head into bar after bar, looking for a sound you like. There’s music in every bar, all the time, so you have lots of options! No one charges cover (although I did see some lineups on Saturday so be prepared for that) so you just head in and if you like what you hear, you buy yourself a drink. Sing along to some of your favourite covers or dance to something new for awhile, and when you’re ready to change it up, move right along to the next one. There are even a few bars (the iconic “Tootsie” being one of them) that have multiple levels—all featuring different bands with often different genres (nope—it’s not all country in Nashville!). Everything is open late, so you may lose track of time, but damn, you’re going not find some fantastic music to keep you interested—that is for sure.

This just had to get a mention, even though we didn’t in fact participate in one ourselves (sadly). A pedal tavern is basically a bar on wheels. 15 full-grown adults sit around this “pod” with a bartender (and a lot of booze) in the centre, and, fueled by the bartenders stiff drinks, they pedal from their seats and power the portable tavern around the streets of town. Yes, this is a thing, and yes, I’m super sad I didn’t try it. Don’t make the same mistake now.

A friendly local Uber driver told us about this area, featuring his favourite hot spots. Like a less flashy version of Broadway, Music Row (also called Midtown) is where the locals are more inclined to hang out. There is less neon, no pedal taverns (that we saw), less tourists but just as much good music. We spent Sunday afternoon here, taking in a few different bands on the rooftop patio at “Soulshine” over a cold cider and some chicken wings and nachos (which pretty much made up my diet for the full six days I was in town). We didn’t get back here twice, but we did hear that “Loser’s” (yes that’s the name of a bar, and it’s right next door to another one called “Winner’s”) has the best music on Monday nights. Also, in this area is where you’re going to the find the famous fried chicken at Hattie B’s. Midday Sunday, the line wrapped around the block, so we skipped it, but we’ve heard it’s well worth a visit. And after investigating online, I’ve even discovered that they offer a Celiac-friendly gluten-free version. Imagine! 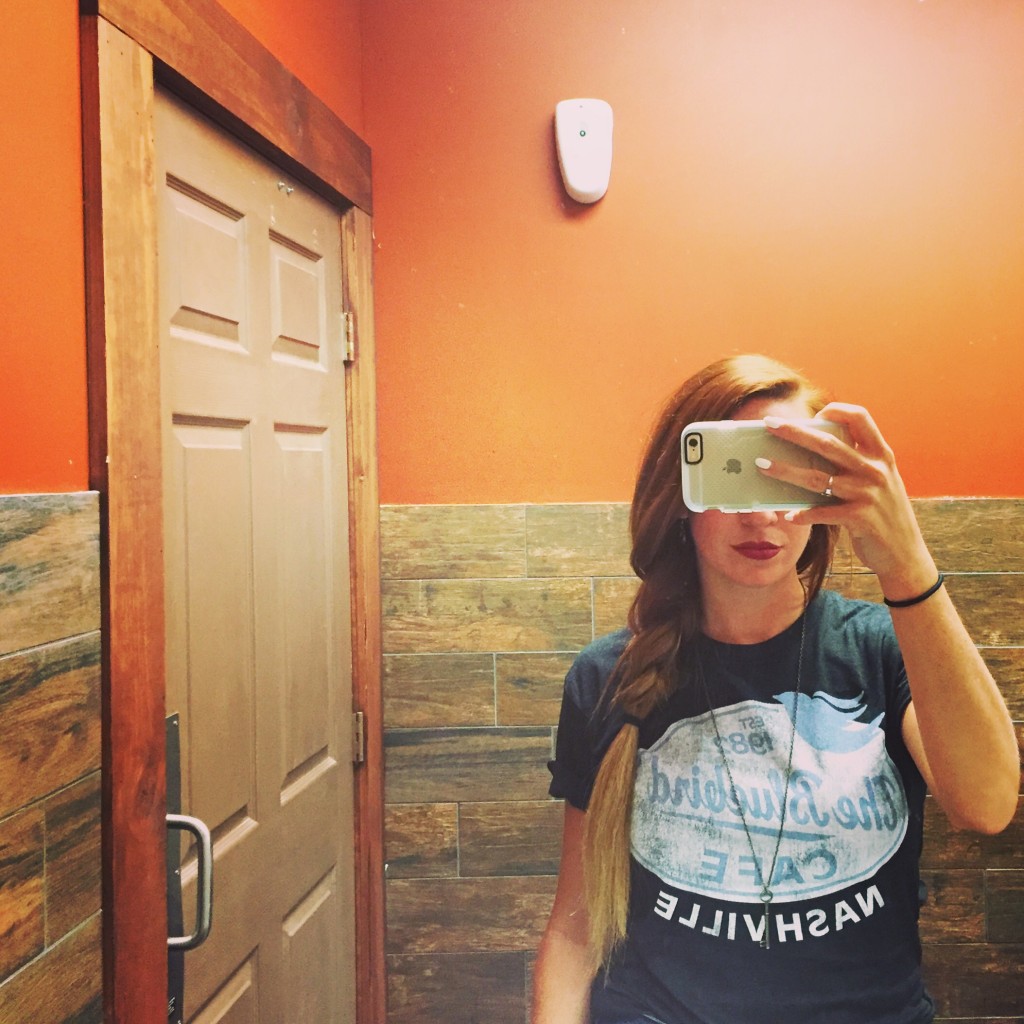 At first I thought this was just a fictional spot on the TV show, but as it turns out, this place is the real deal—and it’s just as iconic as the show makes it out to be. Maybe even moreso. With only 90 seats, this place gives new meaning to the word intimate, and the t-shirts we picked up from the merch desk say “SHHHH!” on the back because you are, out of respect for the singer-songwriters up on the stage pouring their hearts into every word, asked and expected not to talk during the show. I had researched this place a little, and we planned to go Sunday at 5:00PM when the doors opened for the 6:00PM show. But thankfully, an Uber driver we mentioned this to instructed us to arrive by 4:15PM to join the line up that would inevitably form if we wanted any hope of getting in. Apparently the show has turned this place into quite the destination for travellers, or maybe it has always been like this—I’m not sure. Either way, we knew we wanted to make it in (I just had to see the spot where Scarlett & Gunnar first met!) so we got there right at 4:15PM… only to find a lineup 97 people deep had already formed. Trying to stay positive, we waited (not all that patiently) in the hot sun for over an hour, until the employee came out and started letting people in, group by group. By about 5:45PM, we were at the front of the pack and we knew he was at or close to capacity. He came out to inform us he had one seat left.

There were three of us.

And so, we turned our hot, sweaty, disappointed selves to leave…

When we heard him yell “hold up”.

We rushed back over to the door, trying to avoid eye contact with the line up of still probably 150 people hopefully waiting (why, I’m not sure—it was abundantly clear at that point anyone beyond maybe 5 or 10 back would have absolutely zero chance).

He said “We’re going to make it work” and ushered us in to three separate chairs at random tables throughout the teeny, tiny little room. No—we didn’t get to sit together, but honestly, when you can’t talk anyway, who cares?

Rorey Caroll was the artist playing that night and her petite self, offside humour and sully voice dazzled us for one hour and two ciders. And then it was over, and we were all ushered out so the same process could commence for the lineup of people that had formed on the other side of the building for the next show. (No—the people that didn’t get in for the 6PM didn’t get to keep their place for the next show, they had to go start all over at at the lineup that had already well begun.)

Bottom line here: go to this place if you can, but be early. And be quiet. Or, on other nights of the week they take reservations, so maybe try that. Check on their website for details and if you are making reservations, I’ve heard they only open them up one week prior, so be timely!

Maybe not an iconic Nashville destination, but certainly somewhere we had on our “must hit” list while in town. We are big Barry’s Bootcamp lovers and since there isn’t one in Vancouver, we try to hit them up wherever they are to get a great butt-kicking sweat session in while on the road. Yes, it probably would have made participating in a pedal tavern a lot more difficult after a “leg day”, but you don’t feel as guilty ordering chicken wings twice in the same day if you know you fit one of these classes in. Totally recommend you try one of these if you haven’t before—and they’re all over the world. Check it out here.

So that’s Nasvhille in a nutshell—or our 2016 version of it. We picked up a few last minute souvenirs at the airport, realizing we weren’t really sure when or if we’d be back (the same conference has changed locations for next year!), and grabbed a final order of chicken wings and nachos at the airport “Tootsie’s” before our flight. And you know what? Even at the airport, there was live music.