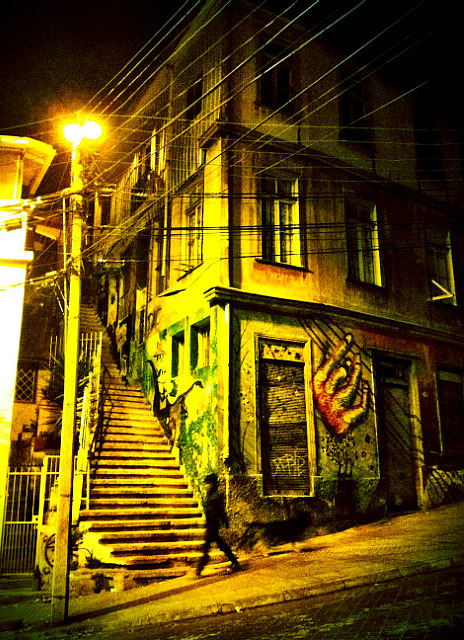 Well, have I ever got a story for you…

It was nearing the end. Only two days left. In a brand new country, in a hilly little town on a beautiful coastline.

Valpraiso and Vina del Mar are two kissing coastal towns, practically like one. Valpo is full of hippies and graffiti and rickety old elevators that take people up and down the hills of the city. Vina is bright and clean and full of beautiful beaches and 5-star resorts. We had booked a cheap hostel in Valpo with wide beds and snuggly comforters, run by a sweet wide-eyed man called Gonzalez. On Monday, we woke up cozy in our beds, well rested, and set out to explore the town; all it’s character, all it’s graffiti. 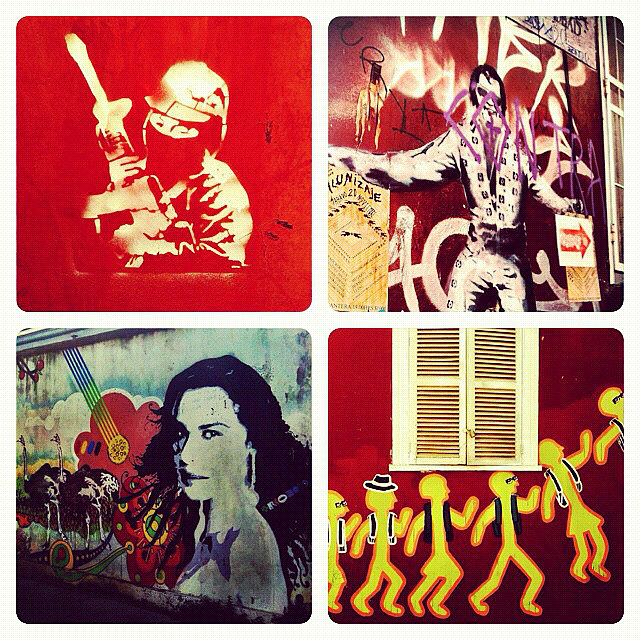 The city was bursting with charm. We popped in and out of artisan shops lined with colorful paintings and then stopped to dine on some fresh fish at an expensive place with a beautiful ocean view. The reflection from the sky made our chilled white wine appear to be a blue-ish green color. Or maybe it was the reflection of the ocean. I couldn’t be sure.

We took the local bus (for the bargain price of about 90 cents) over to Vina del Mar later in the afternoon, planning to dip our toes in the Pacific Ocean and veg out in the sand for a little while. But instead, somehow… we wound up sitting on the elegant patio at the Sheraton hotel, with a billion dollar view, tasting our first “pisco sours”.

Okay, I know, I know. We spent our day at the Sheraton. How much culture are we really absorbing there? On a frickin hotel patio? And a ritzy hotel too! But as I relaxed there, melting back into my puffy green chair cushion, I started to think maybe there was something to luxury. The drinks were sweet. The glassware was clean. The service was impeccable. The view was to die for. Everything was just, luxurious. Hell even the nuts tasted like little bites of luxury as we popped one after another into our mouths. No, I’m not a sell out backpacker, but maybe just once and awhile it is kind of nice to pay a little more and indulge?

Anyway, we sat and we chatted and we sipped. Marveling at the scene we found ourselves gazing out at. The silouhettes of boats could be made out in the distance. The sun drilled a line down the centre of the ocean. As the sun set into deeper into the crease that divides the sky from the water, we reflected on the last five weeks. On our trip. Our journey. In some slightly inebriated version of English, Spanish and French that seemed to flow easily between us. The drinks went down, one after another, all slightly different versions of Chile’s famous “pisco sour”. (My favorite one had bits of ginger and mint in it!) And that’s when the idea began to formulate.

With pisco running through our veins, and bits of ginger and mint in our teeth I’m sure, we whipped out the credit card and paid the $220 (that’s US dollars, not pesos unfortunately) for the one blissful night in a luxurious king size Sheraton bed (my all time favorite bed by the way, and with the amount of time I spend in hotels, I’m sort of an expert, hehe). The view alone was worth that money, I swear. We figured, we started our trip at a Sheraton, it was only right to end it in the same fashion. Plus, after nearly five weeks of sleeping on skinny little rock solid mattresses and opting for the cheaper drinks and foods, didn’t we deserve this? Just a little splurge? Not to mention we were coming home UNDER BUDGET! When does that ever happen when you’re traveling?!

After the sun finally set completely, the hotel town car (no, not a taxi, a town car… much nicer, and much more expensive, we found out) took us back to our hostel to grab our luggage and brought us back to our splendid residence for the next 24 hours. Even less than that I suppose. 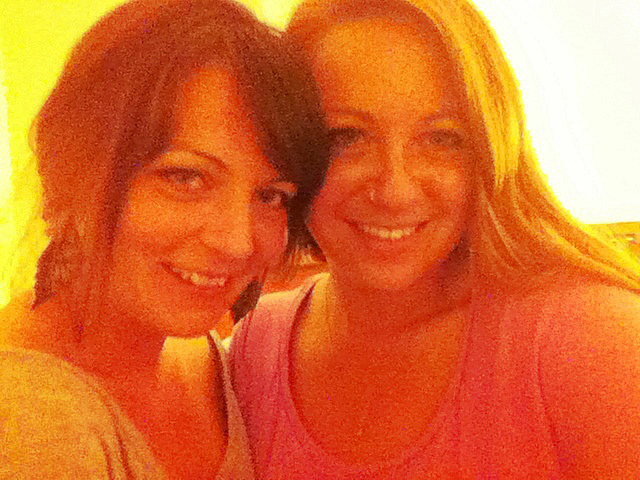 We filled the night with room service and giggles and cocktail dresses and more of those tasty tasty pisco drinks that are as addicting as they are strong. By midnight we were in our robes, sitting in bed, awaiting our room service order of soup, french fries, club sandwiches — oh and of course, wine — to be delivered. (Why we decided to order the lunch special at midnight, I have no idea.) I had drifted off slightly when the knock at the door came and it didn’t wake me. What did, however, was Val calling out my name. With urgency.

That’s right. It was an honest to goodness earthquake.

We weren’t sure how long it lasted, but as I’ve read numerous news articles on it since, apparently the big tremor lasted for 8 seconds and shook lightly for another 35 seconds after that. And then there were some aftershocks.

Once the shaking had stopped, the terrified employee called downstairs and they told us to stay put in our rooms.

And so we did. We stayed. We ate. We didn’t really know what to make of it all.

The club sandwich was phenomenal.

I’m not sure how long until the evacuation began. The alarm was loud and instructed everyone to get outside ASAP. Maybe it was obscene amount of alcohol we had consumed earlier that evening, but I was very calm throughout it all. Calm. Cool. And mildly ridiculous.

Within 5 minutes of the alarm going off, probably less even, we were downstairs with the rest of the hotel guests… with our goblets of wine in hand, wearing our hotel robes.

You know, only the essentials.

They handed out gigantic blankets that some of the men wore as togas (see, most people had a sense of humor about the whole thing) and had us all hike uphill (I don’t remember how far) to another hotel further from the water, where they filed us all into a conference room — our “fall out shelter” — to sit and wait for the “coast to be clear” (pun intended). Val curled up on my lap and slept so I chatted with a group of gentlemen who were in town for a mining conference.

Look! We made the news! —-> http://english.ntdtv.com/ntdtv_en/news_southamerica/2012-04-17/chile-earthquake-powerful-but-minimally-destructive.html

Maybe an hour into it, one of the mining guys came over to where we were all sitting and informed us the sweet hotel employees had brought us supplies! Wine! No, not food. Wine.

Only in South America, I tell you.

Then again, who knows, maybe they got the idea from us.

Either way, bored out of our skulls, we all jumped up to go and get ourselves a plastic cupful. And a little later on, they brought more supples. Scotch. I wouldn’t indulged but I prefer my scotch with 2 cubes of ice, and ice wasn’t on the menu. Haha.

Around 3:30AM I think, they announced it was safe to return to the hotel. I roused Val from the bed she had created out of a few conference room chairs and the oversized blanket and led her, half asleep, to the shuttle vans they had brought to take us back. It was dark inside the van and I took a seat in the empty row at the back. Val boarded behind me and took the empty seat at the end of the second row… and laid down… into the lap of the surprised Asian man sitting next to her!

She thought it was me! And she just cuddled right in there. She had no idea. That lucky lucky man. Haha. It wasn’t until I called out her name, twice, that she shot up in her seat and scurried to the back to join me.

It was near impossible to sleep that night, I was giggling so hard.

And now it’s home time. I can’t wait to see all my favorite people again. All the faces I love. I really need to do my laundry. And exfoliate. And my goodness do I ever need a pedicure! Haha. And then, I need to re-pack. Because I’m off to Amsterdam next week for my next adventure… 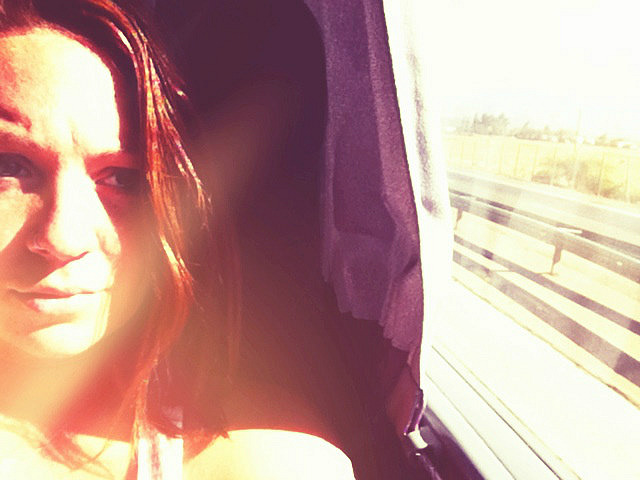 This blog is in dedication to my late brother, Jared.

I’ll take you with me everywhere I go. Together, we’ll see the world.