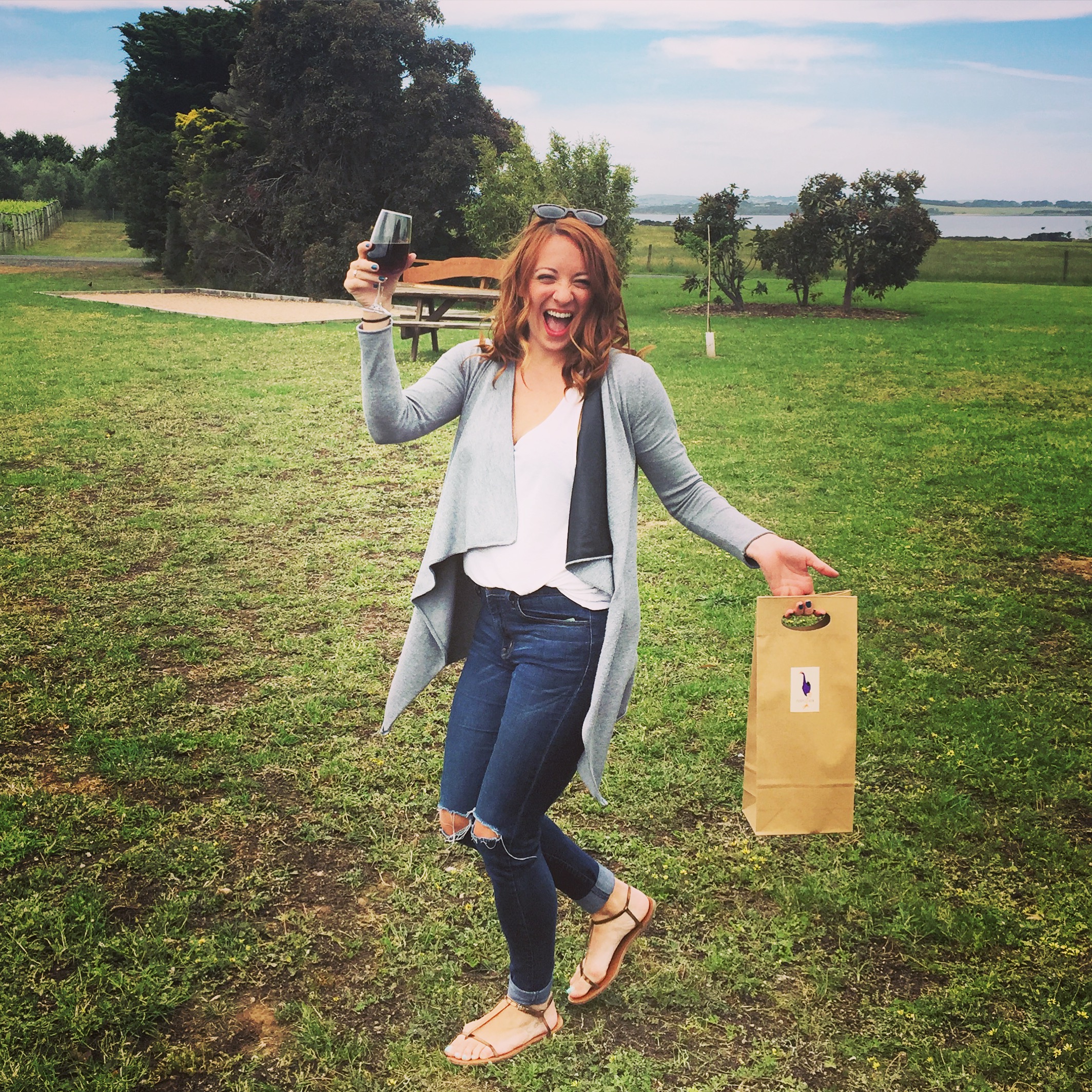 By the time the weekend came, we were eager to get out of the city, as fantastic as it was.Wine tasting in Australia had long been on my to do list, and this weekend, it was going to happen for me. I had had this vision of what Australia was going to be and going to look like, and it definitely included kangaroos and koalas and sprawling green fields full of vines. I was determined to find it

There were four of us this weekend, which made me feel all kinds of blessed. Who is lucky enough to have three of their favorite women join them in a country across the other side of the world for a weekend. Hopefully, many of you. We all had a different story of why we were there. Savannah had lived in Brisbane for the last six years and was about to move back to Canada finally (in a way, I came to bring her home). Sandra, from the UK, was living in Sydney for the next little while, enjoying the end of her Australian visa. And Krista and I were on holiday from Canada—her, revisiting after 13 years gone and for me, my very first time. And there we were, with no real plans made, on a Saturday morning, ready to hit the highway in search of the famous grape nectar that this country was so famous for. 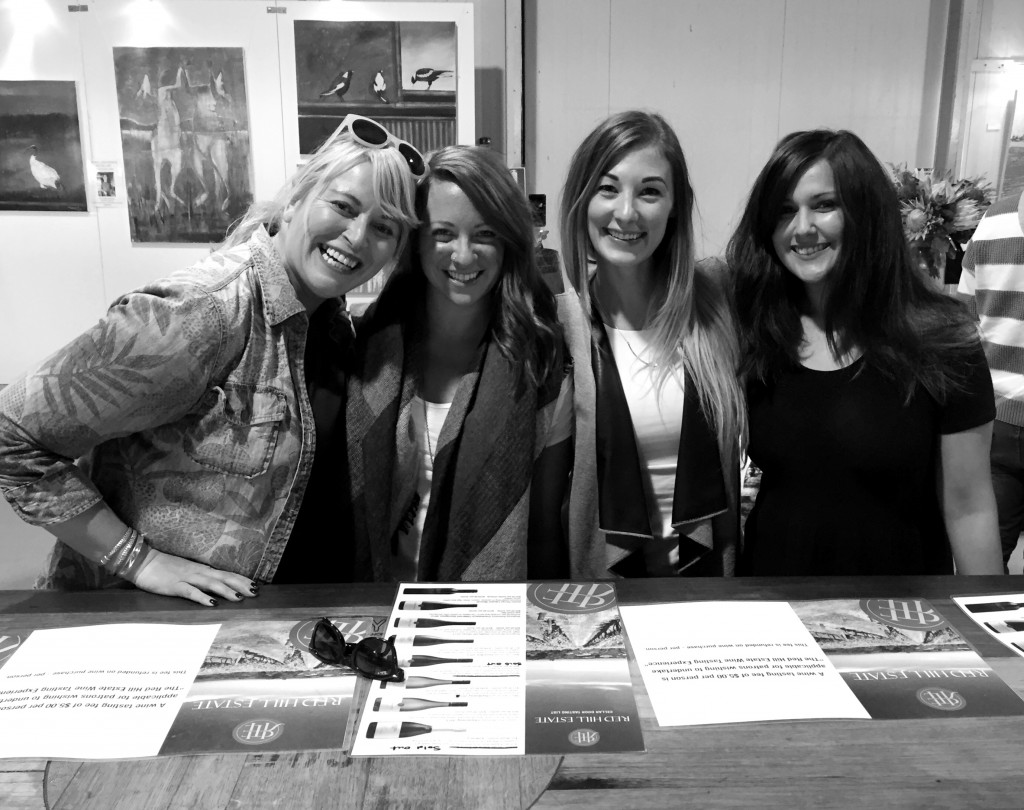 We went back and forth about whether to do Yarra Valley or Mornington Peninsula. We had heard great things about both, and had polled various people we’d met earlier on our trip to try and determine the right way to go. Saturday morning, crunch time, we had to make a decision. The distance from the city was about the same (one hour by car), the hotel cost was a little higher in Yarra, but not by much and we had heard equal reviews of the wines in each region. What’s a wino to do?!

As I reviewed the map for the 100th time, I recognized the name of the little island down near Mornington. It was called Phillip Island. A friend had flagged this for me when I had mentioned I was going out to Aus as a place that was not to be missed—primarily famous for its nightly parade of wee penguins. After a little more research, I had found a beautiful 2-bedroom condo for a relatively reasonable price, a koala conversation centre that we could visit and a few wineries within close proximity. It quickly became the obvious choice for us. 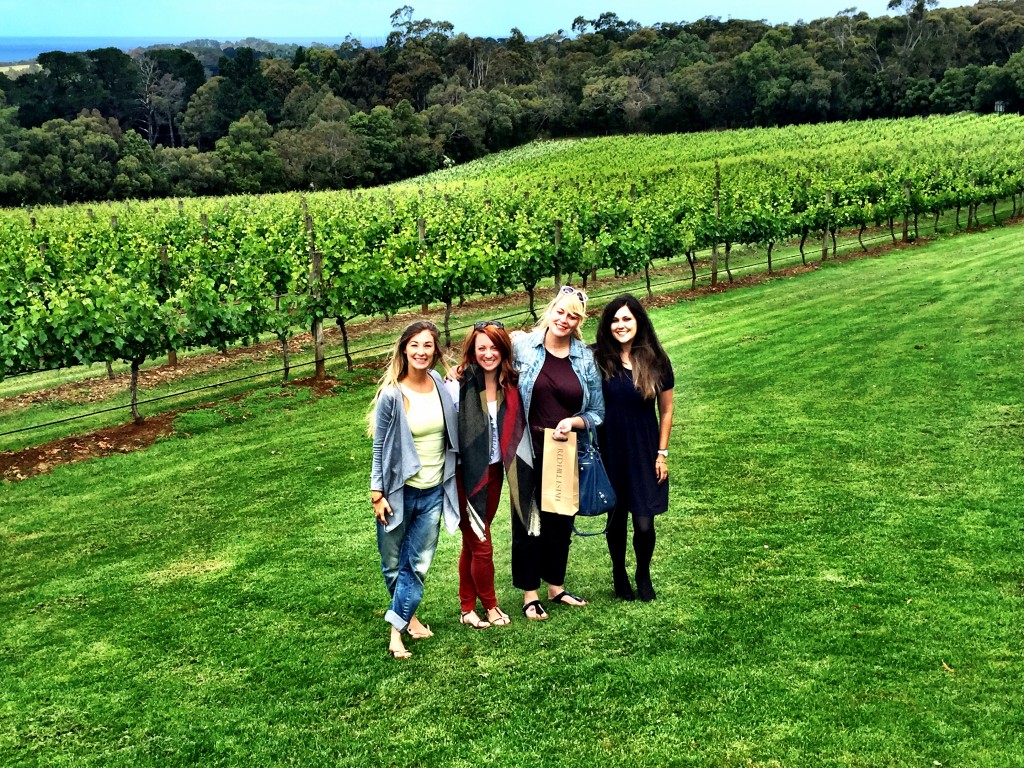 Never in my life have I done so few wineries in a day (Savannah Durkee can attest to this) but we were a little busy mixing in our animal adventures, so it worked out perfectly—just enough wine to get a glow on, but not enough to have you in bed by 6pm.)

The very first stop for us, and we showed up nice and early and just quarter past 10. The wine maker hand’t even arrived yet (he and his son were running a little behind that morning) but he more than made up for the few confused moments we spent peaking around the property with his quality wines, entertaining banter and generous pours. We spent a lengthy hour and a half at the unglamorous, no-frills, bar top in his garage/cellar. We sampled 11 wines in total, and I think we all left with a bottle of something.

This was, overall, our least favorite I would have to say, but it wasn’t bad. Most wines were pretty standard. As I write this up, I have a hard time remembering most of them, except the Chardonnay. I am an oaked Chardonnay lover, through and through, and this one did an exceptional version, full of all of my favorite flavours.

Nice and close to Red Hill, this one was a pre-determined stop for us as it was home of a few of Savannah’s all time favourites (and she worked at a bottle shop, so she knew her stuff). It was the most commercial winery we hit—a beautiful, contemporary property with a restaurant and a bistro on site, with an obnoxious mark up on their wine list (comprised solely of the wines sold on the other side of the same room). All business, no character, it wasn’t somewhere I wanted to spend my money, but Savannah definitely wasn’t wrong—although pricey, the wine was delicious.

Fully rested and once again, thirsty, we hit the road on day two and stopped into this place to kick off our afternoon. The little old, white-haired man behind the counter poured us a nice round of samples from his collection, while entertaining us with wine-related history and trivia. This place was small and didn’t export anywhere, and we each wildly impressed with a number of the varietals we sampled. Purchasing decisions were very difficult. Luckily, the place was equipped with picnic tables and sold cheese platters and wine by the glass, so we had a suitable place to sit and ponder before buying.

I think this one was the collective favourite for all of us. Maybe it was the adventure of trying to access it, via the uneven dirt road, clearly frequented mostly by tractors. Maybe it was the ever-so-charming owner, Roger, who remarked at how impressed he was we had made the treacherous journey—“we were obviously either very committed or very thirsty”. Or maybe it was the wine—dazzling us with delightful surprises with every bottle we sampled. 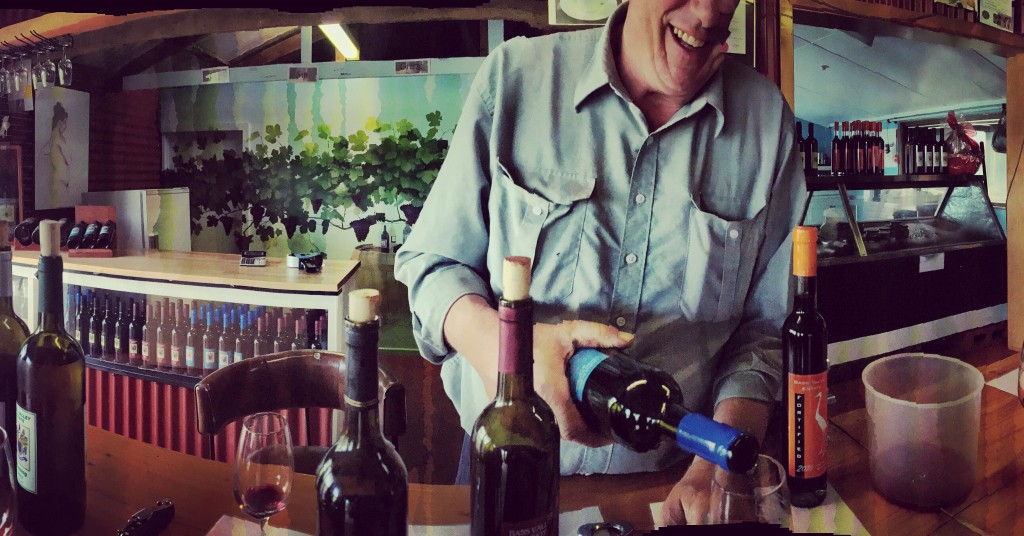 So there was wine. Fabulous. Mind blowing. Such an adventure. But that wasn’t all we did this weekend. We got down with animal kingdom! (Not in that way… get your minds out of the gutter.)

As I mentioned earlier, we had originally heard about this area because of the ever-popular tourist attraction, The Penguin Parade. We unanimously decided we had to include this in our weekend itinerary, because who the hell doesn’t love baby penguins?! They had it set up like a night at the movies, with overpriced souvenirs and bags of popcorn coated in salt and butter. Everyone (mostly Asians) sat, row-by-row, in cold metal bleachers set up facing the beach, and patiently waited for the sun to set. Ranger Dan (as Krista fondly nicknamed him) announced, over and over, and over, and over, and over, that photography of any kind was strictly prohibited. Gah! It took all my will power to keep my Smart Phone pocketed. That would have been Snapchat gold! Can you imagine?! But alas, Ranger Dan was serious (and pretty cute), and it was in respect of the animals, so we obeyed. Just as the darkness set in (and we were starting to freeze) the first little penguin swam, rolled, fell and waddled it’s way out of the waves. He was miniature! Shortly after, a group of three emerged, and following them, a larger pack of probably nine. They all appeared to be slightly disoriented and unstable on their webbed feet, which added to the entertainment. After we figured they had all left the water (there were probably about 30 of them in total), we head back toward the parking lot, stopping along the way to peer over the boardwalk rails to watch as they all cuddled into their little homes in the ground. It was a terribly cute experience and one I highly recommend you all make time for (especially if you have kids in tow). My only negative feedback was that it was a little tough to see—the bleachers could have been set on a greater slant. I did see penguins, but my neck was pretty sore from darting my head back and forth around furry hooded tourists.

When we bought the passes for the Penguin Parade online, it offered us the option to bundle it with a trip to the Koala Conservation Centre. We gladly accepted the up-sell, as koalas were still on our list of local animals to see (for Krista and I at least). Be warned, while sold together, these attractions are not the same thing and are not in the same place, so plan accordingly. We made our way out to see the koalas on Sunday and enjoyed a leisurely wander through the park, carefully watching the treetops in hopes of a glimpse of a cuddly little grey bear. We found four—all sleepy, barely moving—and although we learned from the staff that we were not allowed to hold them (this is illegal in Victoria and New South Wales, so we were out of luck) we stood nearby at least, secretly hoping they’d stumble and fall out of their trees so we could rescue them (and get in a little cuddle). No such luck. But heck yes, we got some great photos and videos. 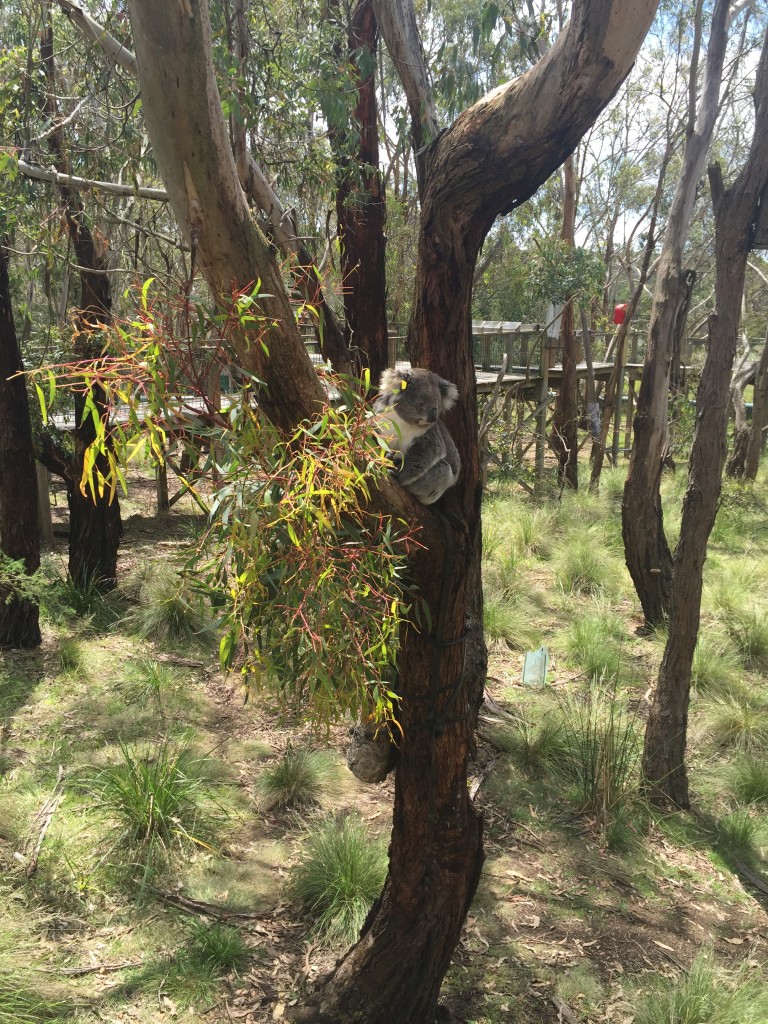 We are all going home with some good loot and incredibly memories, and that last day especially will definitely be remembered as my favourite day of this holiday.

Now, time to sign off and crack a bottle from my new wine collection. 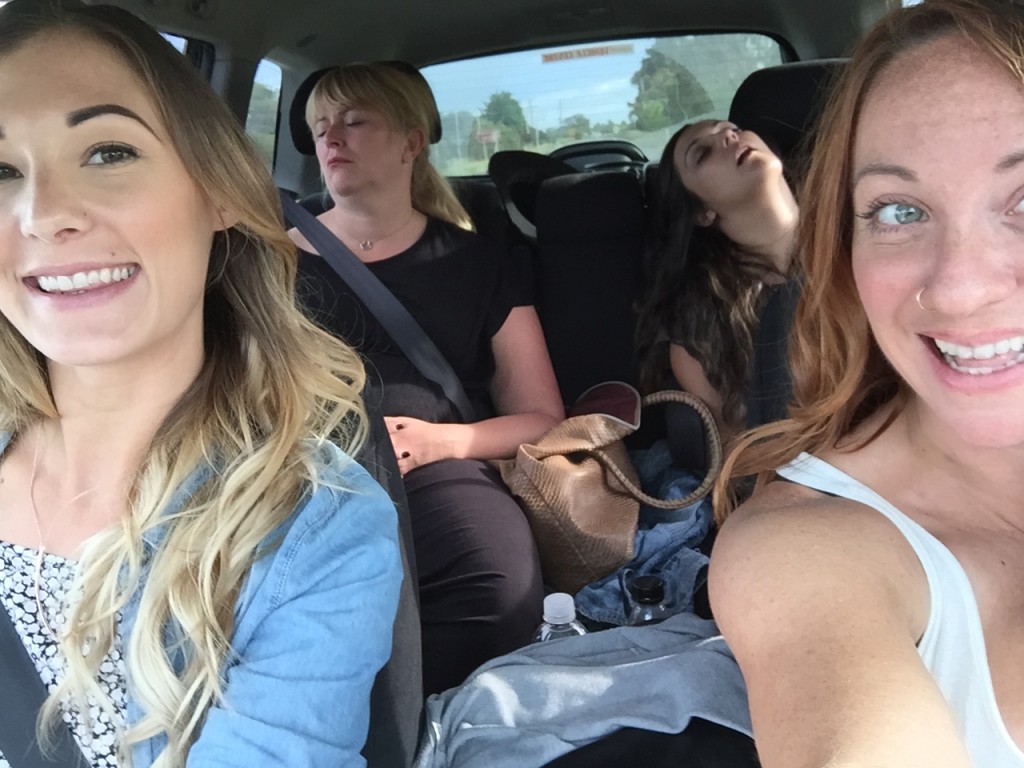