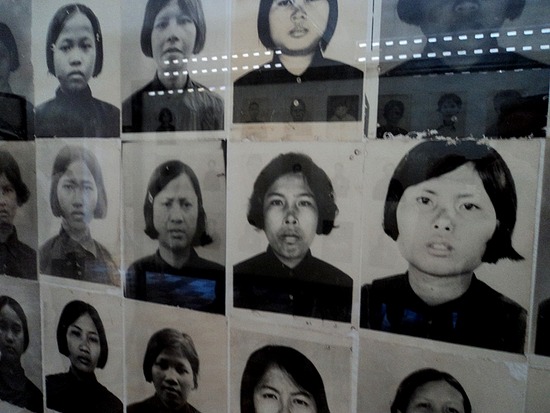 My first taste of Thailand connecting in Bangkok to Phnom Phen. As we were landing, I peaked out my window expecting to see a sprawling metropolis and a core of downtown high-rises… but from where I was sitting it looked scattered and residential – almost rural. I saw apartment buildings and office buildings – one of which was bright fuchsia pink. No lie.

“Welcome to the Kingdom of Thailand” said the cute Thai flight attendant in her bright purple Thai Airways suit. The Kingdom. I love it.

I deplaned and found my connection gate. E2A. Okay. Easy enough. There were signed to E gates. So many signs. Sign after sign. All pointing straight ahead but never unveiling the illusive E gates they promised. The departure screens I passed blinked red final boarding call notices for my flight. So I ran the rest of the way. It was like a sick joke. These E gates didn’t appear for so long. And when they did, I swear I nearly cried with joy. And to think there were still F and G gates beyond that…

Ahh Bangkok. See you in a few weeks. 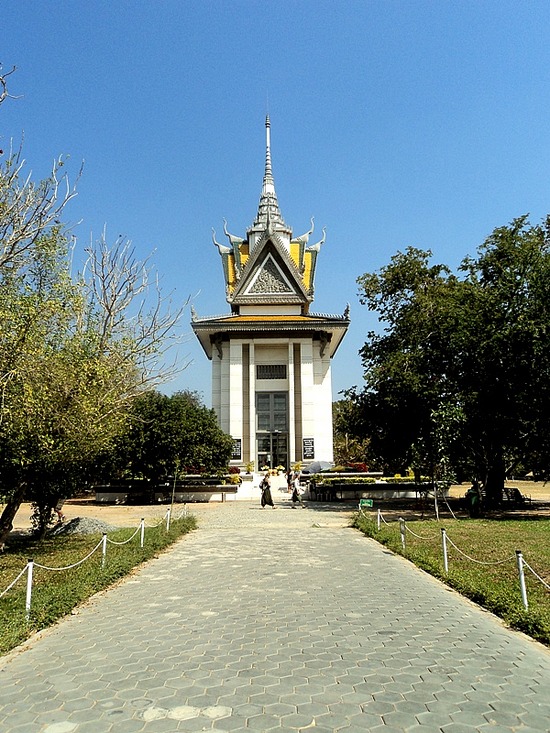 I just had the yuckiest breakfast for $3 after the yuckiest sleep that has now landed me with a sore back. Let’s hope Cambodia has more to offer than this for food…

My first day in Phnom Phen I had to myself. Sophie wasn’t set to arrive until the 2nd of February. On my agenda, as was on most people’s, was to visit the Killing Fields and the S21 Prison – both historical sights of the Khmer Rouge Genocide that took place in Cambodia from 1975-1979. Only 35 years ago.

Never heard of it? Well, I really hadn’t either. I could be wrong but I do not remember studying this in school. Does anyone? And admittedly I don’t follow current events as close as I should. So for those of you who aren’t sure what the story is here… here’s a helpful link to provide some context. 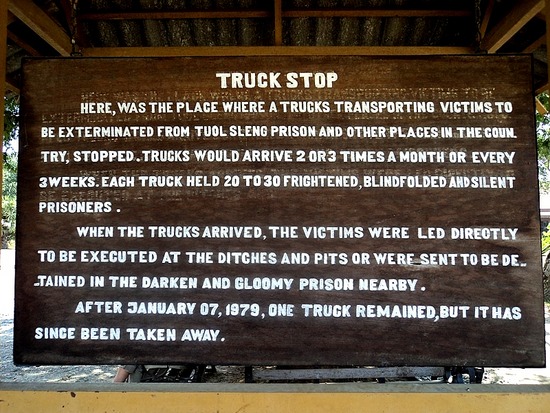 I hired a tuk tuk, a bony little man called Chad, for $10 for the afternoon. We drove through the busy traffic jam of Phnom Phen, with only one “almost crash” that was barely avoided. I breathed in the exhaust of the city and all the smells assaulting my senses. I held my hand over my mouth and nose to filter the air, finally understanding why so many Cambodians sported surgical masks. (It wasn’t just because they were big Grey’s Anatomy fans? Haha. Okay, bad joke. I know.) I can tell you, never in my existence have I been more appreciative of the crisp mountain air I get to breathe at home in chilly Calgary. (And the Israeli boys I met later told me Phnom Phen was nothing compared to India…)

We drove 15km outside of the city and rural Cambodia began to unfold before me. When we pulled up to the Killing Fields, I was surprised… it didn’t look sad or horrible at all – rather beautiful really – with a towering with monument standing proud in the middle of a field of trails and water and overgrown trees. I approached the monument and a gentleman at a little table out front sold me some flowers and incense for $0.50 so I could pay my respects. As I removed my flip flops and walked up the steps, I realized what was inside that glass monument. It was a display case, probably 20ft high (keeping in mind I’m horrible at height estimations so that could be far off), full of skulls. Skulls of the Cambodians that were killed at this site, not very long ago. 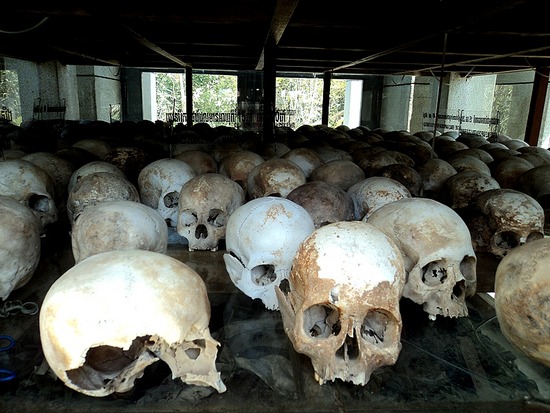 As I wandered through the grounds, I marveled at how peaceful and serene it really was out there. I stopped to read the posted signs that described forms of murder and identifed roped-off grave sights where headless victims lay.

It was eerie and beautiful and absolutely nauseating, all at the same time. To walk through and imagine all the terrified blindfolded faces of the Cambodians brought out in truckloads every few weeks. To see the militia in their baggy black pants and bright red sashes, turning up the music to drown out the dying moans.

I walked, a little heavier, back out to find Chad, who was waiting in the shade in the back of his tuk tuk, playing cards with two other drivers, waiting patiently. He shooed them out when I walked up and we took off, back on the road again. Back into the city and off to the prison.

Entering through the main gates sand paying my $2 fee, I looked around at the once-was school. From where I stood, it didn’t seem intimidating. I somehow expected visiting a prison to feel a lot scarier.

I walked through the large prison cells in Building A where the dictators and powerful corporate men were held. Then through some of the small, brick cells of Building B. I turned into the next room to find myself faced with walls of headshot of Cambodian people. It was like looking at a school yearbook, except for the expressions on their faces. I looked from face to face, locking on their eyes. They looked terrified. And that was probably just one of the many emotions racing through their weak and powerless bodies as they knew death was sure to follow. 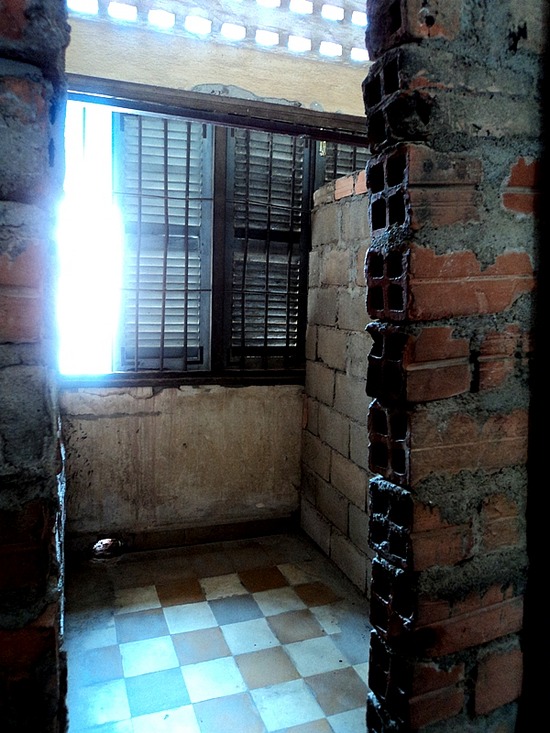 Rows and rows of men’s faces. Some young, some old. Then the rows of women’s photos began. And amongst them, pictures of little girls no older than six or seven. The terror in their eyes bore into me. I saw a few photos of defeated mothers clutching their babies in their arms, sitting straight for the photo that they knew was meant to record their death. Their murder. I blinked back tears as I studied their faces. There were some photos of men after they had already been killed, lying bloody from torture, sprawled on the floorof the cell they could hardly fit into, where they probably spent the last 2-7 months of their lives, waiting for this very moment to arrive.

I read a poster about the first unveiling of this historical record in 2006,w hen local Cambodians could come through the prison and see and understand what really happened in their country, just a few decades ago. It prints:

The tours may allow survivors the opportunity to place their own pasts within a larger historical context. A few have even found answers to the disappearance of loved ones. On the September 2006 tour, one survivor discovered that an S-21 prisoner photograph was her missing brother. 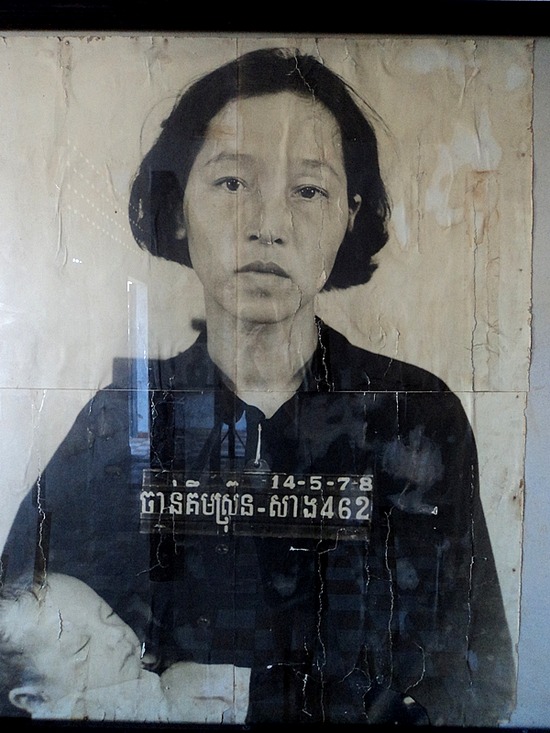 I breathed in deep as I began to feel very light-headed. I walked into the courtyard and took a seat on a bench. I noticed how many other visitors were sitting out there as well, just staring at the ground.

As hard as it is to be faced with these horrifying realities, it’s something we need to know about. We need to understand what goes on in this world we live in. And this wasn’t even very long ago! Some of you were coming into this word around that time, others were living out their youth or even their adulthood already. I’m glad I went, as hard as it was. I’m glad I can understand what happened.

A guy I met in Bali recommended a book to me called “First They Killed My Father”. It is one woman’s story of her experience and survival of this genocide. Hers and her families. She was only five years old in 1975, when it all began. I picked up that and another book at the prison’s “gift shop” before leaving (that seems like a very strange thing to call it in a place like that… but you know what I mean). I’ve started reading it. It’s heavy. But it will be interesting to read while I’m traveling through the place where it all occurred.

I think after a heavy read like that I’m going to have to get my hands on a Chelsea Handler or something… haha. Lighten the mood!