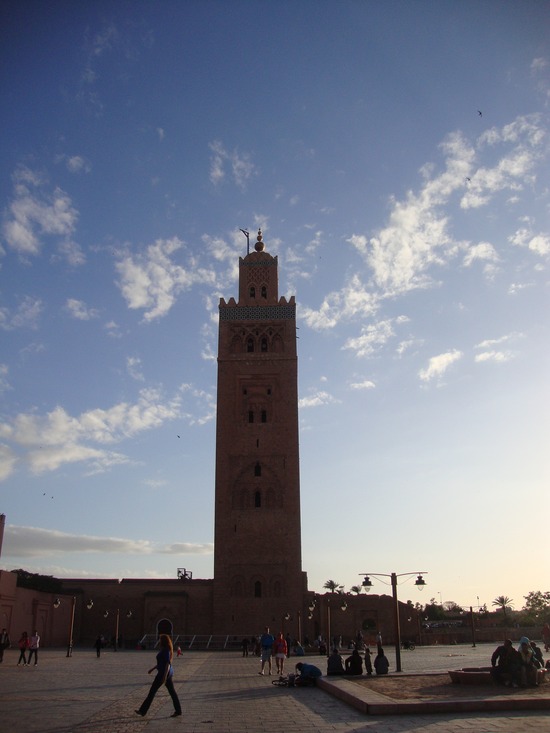 We arrived into the Marrakech airport just after 10am local time, pretty disoriented after the near zero sleep. Arabic letters covered the doors, windows, sides of planes, immigration cards. Its interesting to be confronted with not only a language you cant speak, but one with characters that you cant even comprehend in any way. The first few moments were a complete and total blur really. Someone from the hostel we had booked, the Riad Marrakech Rouge, sent a taxi to meet us at the airport and ddropped us into a parking lot where one of the hostel staff met us and lead us through a few thin, dusty, dirt-floor streets cluttered with locals on bikes and mopeds speeding by, nearly knocking us over. We came to a big heavy door  with zero identifying markings that was to be our accommodation. In hindsight, I may have found this situation questionable, but at this 0point we were deseperate for a soft place to rest our heads. That we did NOT find…. the pillows were literally as hard as rocks. Like rolled up rugs that didn’t move an inch when you fell into them. The beds were just wide enough to not fall off of. But somehow, after our warm welcome and very first pot of mint tea, we drifted off into a deep exhaustion-enduced sleep. (for Shai, one that lasted an entire 8 hours!) 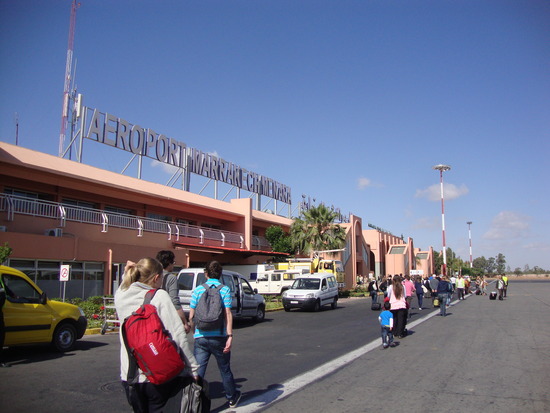 Obviously starving, we threw on some “loose fitting” outfits and head out alongside our roommates, (two girls from Winnipeg – Kendra and Neila) to the Djemaa el-Fna – the massive square in the centre of the city which also features a souq (market), famous for providing hours of “entertainment” as travellers literally get lost inside while browsing for Moroccan hand-crafts. It’s definitely something to be seen, that square at night. The centre, open to walk through and home to various street performers by day, is transformed into hundreds of food stalls with benches set up for dinners and men standing in the walkways shoving a menu in your face and hustling you into their stall. Morocco, well Marrakech in particular, is definitely pushy. Although its the same “idea” as any other third world country I’ve visited, Marrakech was slightly more extreme. And yes, the men do say “hello” or “ca va?” or “i love you” with a slimy grin on as you pass by, a few have started to walk towards us, but I don’t feel in danger in the slightest. Just as my experience has been elsewhere, a firm NO and walking along is all that’s required to end that right there. Sure, maybe they don’t love the rejection, but they know to expect it. It’s more a game to them then an actual suggestion of anything. It’s like when you get cat calls walking past a construction site sometimes back home – annoying? Sure. Dangerous? Not so much. Only when provoked. Well that’s my take on it thus far anyway. Proceed with awareness, as one should always. 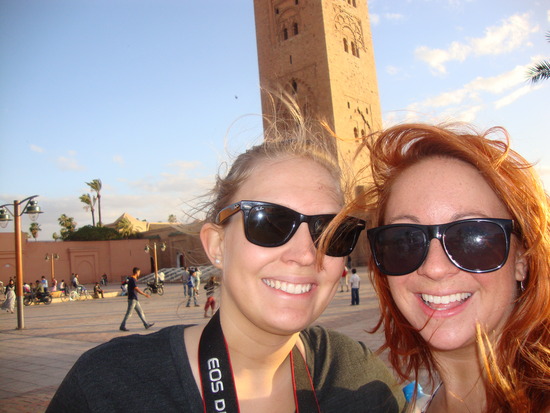 We found stall 75 and allowed the young local to shuffle us onto the benches where hot bread was ready and waiting. Our first Moroccan meal: chicken kebabs, vegetable kebabs, rice and olives. Not bad. He did bring us over a bunch more plates of things that we did not ordere which he then would’ve insisted we pay for, but we corrected him and sent them back immediately so as to avoid this. Total cost for meal (including a bottle of Fanta) was 50dirham (5.82$ canadian).

After dinner, we strolled through the souk – careful not to wander too far as it was nearly dark and things would shut down shortly (which seemed to happen around 9pm). We picked out some earrings and bracelets ranging from 5-10dh and some hijabs (scarves worn over women’s heads in Muslim areas) for 80dh (which we later found out was far too expensive) and then some amazing linen pants for 90dh. We spent the rest of the evening int he lounge area of our hostel (which was lit only by candles making trips to the bathroom, located 2 floors up on the roof terrace, possible, but challenging) chatting with our new friends over a few pots of delicious mint tea.