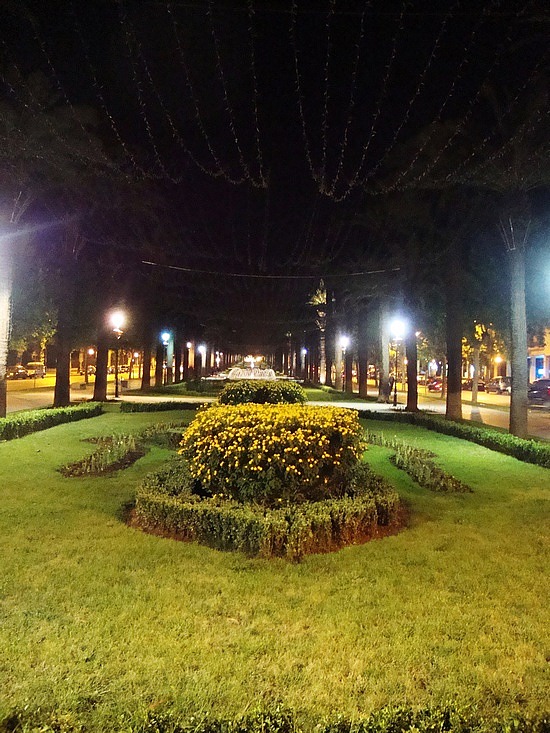 (I wrote this one that day and transcribed later so it should be mostly in present tense… haha.)

Maybe the second longest day of our travels thus far. We hadn’t booked any busses yet but had a Supratours schedule on hand and yet to encounter a day that didn’t just work out, hence our unfaltering confidence. The plan was to catch the 930am bus to Marrakech (3hr trip) then the 7pm train to Fes (7hr trip) then a local bus to Chefchaouen (4hr trip) putting us into town in the middle of the night. And the hope was to stumble upon an internet cafe at some point to book a hostel in Chefchaouen. Well, like I said, that was the plan. But as I scribble this into my notebook now, I am not enroute to the indigo buildings of Chefchaouen, but laying across a large, hard as a rock, double bed in a private room in Fes, with sounds of the city – cars, horns and people – drifting outside our open window (our only form of much needed air conditioning).

At 9am, sans-makeup, back-packs hoisted and strapped onto our weakening shoulders, we asked for 2 tickets to Marrakech at the Supratrous desk. The woman politely informed us that all busses until 6pm that day were sold out. Surprise! She told us we could sit until the bus was fully boarded to see if there were any no-shows, so as we sat, we formulated some possible backup plans. At 929am, the woman raced into the office and quickly produced 2 tickets, took our 65dh and hurried us onto the bus, where we occupied the last 2 available seats, not together, but near each other at least, for the 3 hour journey back again to Marrakech (most of which I slept through).

We arrived a little late into Marrakech and scrambled down the street to the air conditioned train terminal to catch the 195dh train to Fes. We had hopes of splurging for first class tickets, but alas, sold out. And so we cozied up with a couple of local business men into a train car. Well, what we thought then was cozy, but was really rather spacious in comparison to the to the multitudes of people that would come and go from that train car during the actually 9.5hr train ride.

I broke out a new book – Memoirs of a Geisha – and alternated between reading intently and sleeping upright, my head heavy, bouncing back as it dropped, waking me over and over again. At one point, all 8 seats of the train car were full: 3 single women, 1 single man and a couple with a smiling baby boy on their lap next to me who kept turning the pages of my book and smiling up at me. He was so happy to be there on his mom’s lap on that train ride. He smiled at everyone around him and everything he saw, and then... splat. He vomited all over the floor and most of our feet. Everyone pulled little klennex containers from their purses and rushed to wipe it up. I wiped my own foot clean. And the little boy continued to sit there, smiling. Haha.

Later on, as I sat completely enthralled in the life of this geisha and relatively unaware of my surroundings, I started to notice the voices around me getting considerably louder. I looked up from my book and took in the scene unfolding around me. The 3 women, who weren’t traveling together, appeared to be teaming up in a heated debate against he single man traveling. All the loud voices spat back and forth, all in Arabic. We watched the body language, the mocking laughter between the women, and tried desperately to understand what was going on around us. One woman, who later told me she was an emergency room doctor who wore her hair uncovered and long, past her shoulders and dressed in conservative, but Western-style clothing, stopped to explain to us what was going on. When she had come into the car, there was a man sitting across from us with his bad on the seat next to him. She had asked him kindly to move it aside so she could sit, and apparently he had told her to stand outside the car for a little while until his stop came and he would be leaving. Naturally, she was a bit shocked by his response and in the end, the others ingle man had moved his bag for her to have a seat. Somehow, this event had exploded into a full blown debate involving everyone in the car, most of whom hadn’t even witness the incident. She was cut off while translating to us as the debate flared up again. We guessed it had grown into a broader discussion regarding fair treatment of women, but who could be sure. I went back to my book, and Shai went back to her iPod, and the Arabic continued on.

We noticed again later in the ride, when we were sitting with an entire new group of people, all traveling separately, they too got into some sort of group conversation that went on close to an hour. We remarked at how different our culture was in this regard. Although, they were again, discussing in Arabic, we could certainly determine that it wasn’t simply an exchange of pleasantries or comments about the weather or the long train ride. Whereas at home, if strangers conversed at all in such a situation, it would likely be small talk in the smallest way. Strange.

Nearer to the end of our long ride, there was a man sitting across from us with a silver wedding band and a striped dress shirt who inquired, in English, where we were from. We ended up mentioning to him our plans of boarding a local bus to Chefchaouen later that night to which he suggest we stay the night in Fez and deal with Chefchaouen in the morning, on a safe and comfortable Supratours bus instead. Of course we knew that would be simpler, but our research on hostelbookers.com and hostelworld.com had returned the cheapest room in Fez to be a riad for $40/night – double our $20/night budget – and therefore making 4 nights in Fez a non-option and making the 9$ rooms in little Chefchaouen even more appealing. The man quickly made a call and set up this large 1-star hotel room with 2 double beds and a somewhat suitable shared bathroom in Fez’s “new town” or “Ville Nouvelle” for the bargain price of 80dh! Combined! So regardless of how the mattresses don’t even react when you sit onto them, or the cracks in the tiled floor, we could think only of the money we were saving, and agreed to his suggestion.

We thanked the man, Omar, who as it turns out used to work in the tourism industry (hence his connections and in turn, our great deal) with Contiki Holidays, and we managed to evade his awkward proposal of meeting for beers at a nearby night club later on. It seems Moroccans don’t really understand the concept of “maybe” or “we’ll see”. They want to immediately pick times and meeting places. And seriously, doesn’t Omar need to go home to his wife and children who he’d shown us wallet-sized photos of earlier on? Why would he be meeting two Canadian girls at a night club?

Saturday morning around 7am. Only 5 hours after drifting off into a much needed slumber, I wake up. I try to sit up and adjust positions on what I’ve realized is not only a firm mattress, but a completely rock solid bed. the muscles in my back – upper, lower, shoulders, neck – tense up in pain. I try to sit upright. The pain shooting through me almost makes me cry. Oh what I wouldn’t give for a muscle relaxant and my trusted chiropractor right now. How the heck do you find a chiropractor in French in the north of Morocco? So this is why this place only costs 80dh. It’s actually bad for your health! I still have my chest cough and my back aches as my ribs expand to cough. Every movement hurts. Shai wakes up a few hours later (while I’m still sitting and adjusting and cursing the bed from hell) feeling the same ailments as I. We whine and complain and immediately, even before a much needed shower, throw on some clothes and trudge down to the nearest internet cafe to find somewhere else to stay. (It has officially been determined I will have to dip slightly into my savings account for stupid expensive Fez – at least that’s how I felt about it in that moment). Before we left the hotel (around 11am) we mentioned tot he woman at the front desk that we’d be back in a few hours and then would let them know if we were staying another night. She said that was fine. We called riad after riad, asking in my pitiful French if they had a room for the next three nights. Desperate for somewhere that wouldn’t eat away 2/3 of my $60/day budget. Finally, we booked Riad Jardin Chifra for $40/night. Sigh. So over budget, but at this point, we were hot, sticky, achy and desperate.

We then tried to find breakfast before heading back to the hotel but alas, it is nearly impossible to find restaurants in Ville Nouvelle. It’s all just cafes serving tea, packed with local men who stared at us and made comments as we passed by. We were frustrated, sore and starving. It wasn’t our favorite moment, not gonna lie. Finally, we found a restaurant and sat down with a fresh orange juice in hand to check out the menu. 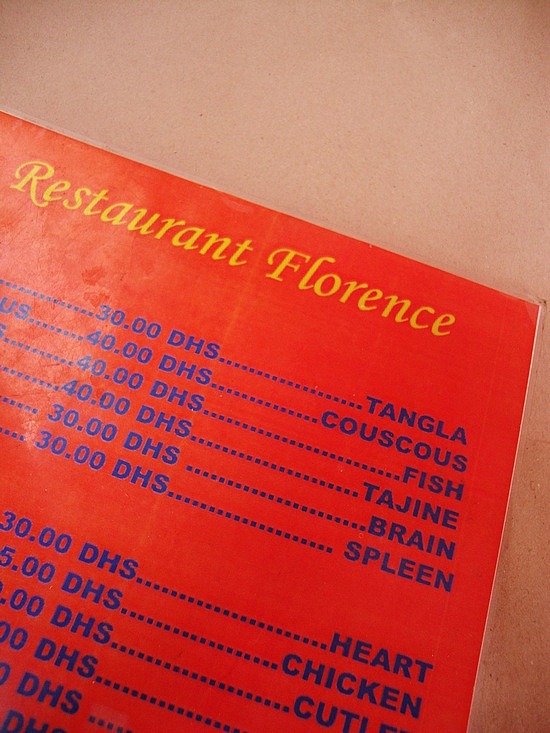 We ordered two plates of fries.

Back at the hotel, more hassle awaited as the manager tried to tell us we had to pay the entire nights stay since it was past “midday” (when check out was apparently, even though the woman indicated nothing of the sort) and furthermore, he said Omar, the “helpful” man from the train, had called to confirm that we would be staying another night! What the fuck?! (Excuse my swearing, but seriously.) We tried to reason with the man and arrange for an appropriate fee for our late check out instead. We got him down to 50dh. It was only 2pm! We huffed and tossed the money on the counter and went to pack our bags. We bid goodbye to the cheap, hard beds of death and the grumpy little manager and grabbed a taxi to our new riad.

The owner of the riad himself came to meet us at the entrance to the medina and we were brought inside toa  beautiful courtyard full of mosaic tiled walls and tables and fountains. Mint tea with fresh mint leaves was poured to “welcome” us and a woman who spoke terrific English sat outside with us chatting about the city and playing with the owners youngest daughter. Then, up to our cozy little suite with a mosaic tile sink and beautiful shower, to nap and clean up. Oh – and we booked our cooking course for Monday for 440dh with well known local chef, Lahcen Beqqi (www.fescooking.com).

Maybe Fez wouldn’t be so bad after all… 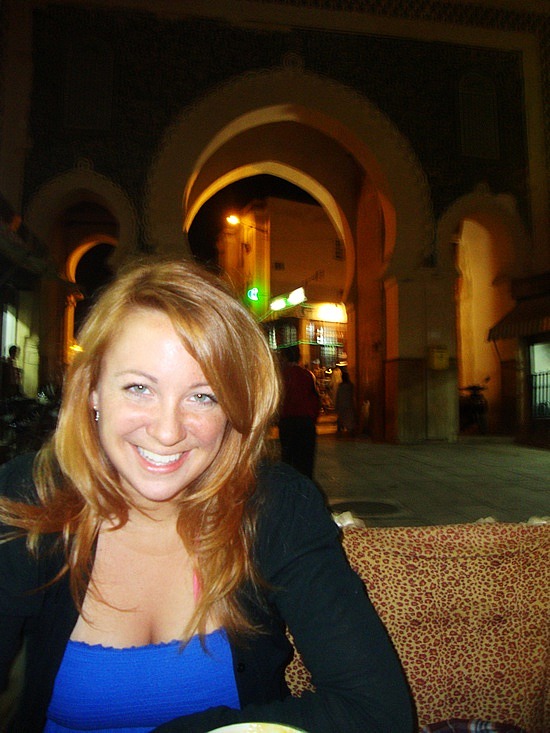