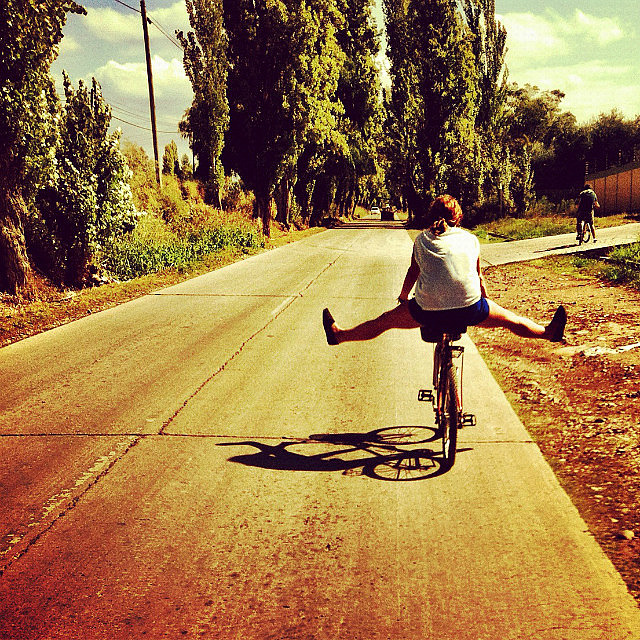 Our last weekend in Mendoza was phenomenal. Friday evening we were invited to an “asado” which is a very common get together in Argentina – easily translated as a BBQ. Ariel, our Californian friend from school, had been staying with a few locals in a house just outside of town, which she’d hooked up through couchsurfing.com, something I have yet to try for myself but have been meaning to check out for years now. (For those travelers on a budget it’s a fabulous way to see the world for cheap.) Anyhow, Franco (a tall, bearded, ginger-haired local music student) and his friends were throwing her a goodbye asado that night, on the rooftop terrace of his girlfriends apartment. They invited us to join and, remembering how delicious the meat we had eaten at the farm the weekend previous, we eagerly accepted.

We turned up around 1030pm — in a taxi (I no longer walk anywhere after dark following last week’s unfortunate incident, and even when I’m out during the day I find my shoulders are tense and I’m clutching at my purse). The night was warm and dark and the scent of grilling meat filled the air. Bottle after bottle of red wine was opened and shared around the table where we all sat on plastic chairs and stools and chatted as best we could manage in a 90-10% ratio of Spanish to English, combined, which only got easier as the wine drained out of our glasses and into our bellies.

When all the steak and chorizo and blood sausage was devoured, probably around 2am (honestly I do not know how I’m going to adjust back to the North American timeframe of daily events) we all piled into some taxis, passing the last bit of wine back and forth and sipping it straight from the mouth of the bottle. We ended up at a sweaty little place called Rumboperdido, in a suburb of Mendoza called Godoy Cruz, with cassette tape lamp shades and a DJ standing behind a wall made of old television sets, pumping out an incredible set of local stuff. The beer was served by the litre, in massive plastic cups, and it splashed out onto the sticky floor beneath us as we danced around like idiots until nearly sunrise.

Saturday we spent another day at the vineyards of Maipu (pronounced “my-poo” if you didn’t catch that in the title… yes, I’m 12 and think this is hysterical). The sky was alarmingly blue, spotted with puffy white clouds, and looked remarkably similar to the introduction to The Simpsons. We hummed the theme song as we rode along.

We tasted chocolate liquers and smoky reds and olive pastes and crisp whites. It was this day I discovered my new favourite vineyard in the region (not that I don’t still have a special place in my heart for Tempus Alba). Mevi. A boutique winery that only opened to customers just a year ago. It was clean and small, the view from the patio was breathtaking and the wines, divine.

Our last stop was a vineyard that originally started up in 1869, one of the oldest vineyards in Mendoza. We toured through the basement, packed with historic photographs and dusty old bottles from years and years of harvests. After the tasting, I picked out two bottles to bring home with me, one of which is a reserve from 2004, from a very good harvest of which there are only 400 bottles left. There is still dust on the bottle. I can’t wait to add it to my collection.

I think I’m going to need a bigger wine rack.

For our final evening in Mendoza, we returned for the 1000th time (ok, yes I’m being dramatic for effect here) to our beloved Cachita’s. We sat on the patio and ordered a parade of our favorite things – the lamb burgers, the goat cheese salad, the passionfruit mojitos, the overflowing goblets of red wine. Our dear friends at Cachita’s opened a bottle of Layer Cake Malbec that they would soon be adding to their menu. The owner of Layer Cake Wine, Jayson Woodbridge, had been in town the same few weeks as us and had apparently fallen just as in love with Cachita’s as we had. He was there every night too. But this was the first night I had tasted his wine. And my goodness was it delicious. And made better by the fact that it was on the house. (Apparently those guys loved us as much as we loved them!)

We didn’t go anywhere else that night. Eventually the other patrons cleared out, the servers went home, we closed the doors, turned the music up loud and danced and sang and laughed and drank with our friends until dawn…

…just in time to catch our eight hour bus ride through the Andes Mountains to the coast of Chile.