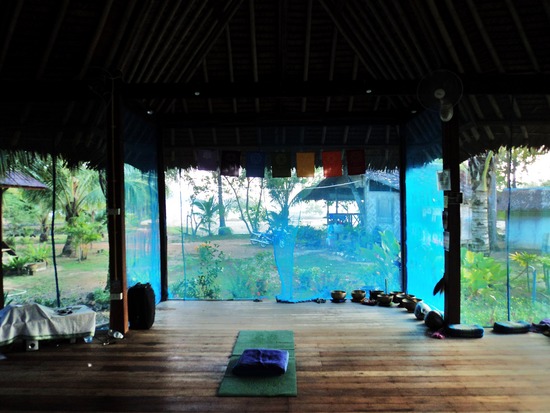 So there I sat at what I believe was called the Ti Yan Pier, or something like that, waiting patiently with a group of scattered locals – women with headscarfs and men without shoes. Not a single tourist in sight. Nor a boat. I confirmed and re-confirmed and was assured through discolored teethy grins that yes, this was the place. The ferry would come. I was eager to see what this island was all about as any travelers or even travel agents I had mentioned it to had just shook their head in confusion, having heard of no such place.

Within about twenty minutes however, the ferry arrived. The ferry was really just a longtail boat that we all climbed into where water splashed over the sides a little and any bags left on the floor became a little soaked through. 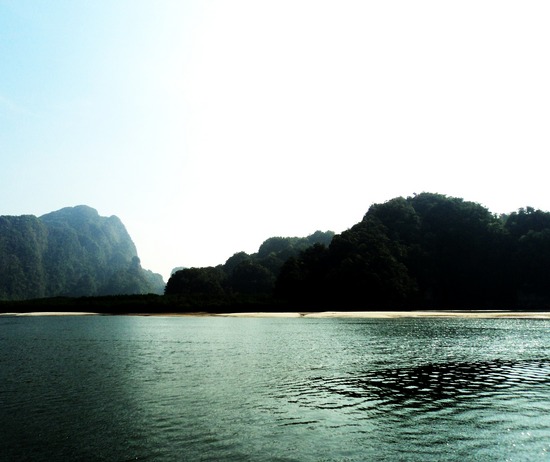 Thailand, well the south of Thailand, and even then, only from what I’ve seen, is spectacular. (I suppose I need to get out thesaurus.com again here….) The water is a perfect turquoise blue when the sun lights it up and there are little islands everywhere with small stretches of beach and tall grassy mountains that protrude up and into the clearest blue sky.

After a 45 minute boat ride, I arrived and just around the corner from the pier was my accommodation. A lovely little place called Santisook. A young woman in a headscarf showed me to my hut where I dropped my bags, changed into my yoga clothes and wandered down the street in the direction she was pointing to find the yoga studio.

The first evening class I took was taught by an Austrian woman named Heidi. There were seven women in the class and we practiced in a wooden, open-air studio protected from the elements only by a thin mosquito net walls and a bamboo thatch roof. From mountain pose at the top of the map, there was a stunning view of the beach. When I opened my eyes after savasana, the sun had nearly set and the orange sky lit the way as I walked the five minutes along the beach back to my hut. 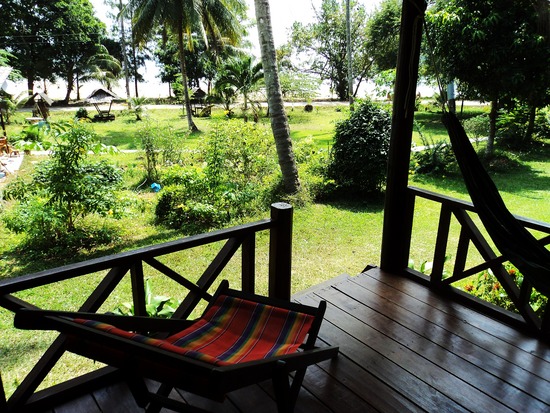 At my resort (resort seems like a bit of a posh way to refer to Santisook but for lack of a better term, we’ll go with it) there was a restaurant and common area, fitted with one computer available for use that seemed to always be tied up and shared amoungst all the island’s visitors who popped in, bought a mango lassie and sat on it catching up on emails, hence the lack of blogging on my end. Behind that building there were about eight huts, one of which was mine. It had a hammock on the veranda, a double bed with a mosquito net, a television (which only had four English channels, two of which were just religious preachers) and a nice-sized bathroom with only a few very small little bugs crawling around in it. And… even a hot shower. Paradise really!

After a meal of Pad Thai (what I lived off of while I was there as I was restricted from enjoying the amazing spicy Thai curries due to that pesky stomach problem of mine) and a bit of conversation with my new friend Beth who I’d met after class (I knew she was Canadian right away when I spotted the lulu lemon logo on her top), I retired to my room. It was 930pm. I flicked on the TV. The only thing I could find was a Russian newscast where they were interviewing a Finnish government minister discussing the new ideas and impacts of lifting the border restrictions between their two countries. For those of you that are interested, it did seem, to both men discussing it, to be quite favorable for both. (Really, honestly, what am I talking about… I have no idea. Although I did meet a Finnish girl later on at the retreat and tried to impart my new found current events onto her… I’m sure although her face didn’t exactly light up, she was very impressed.)

I woke up the next morning, tangled up in my mosquito net. Choking on it, with it twisted between my legs and my toes. I came to and took in my surroundings. Right. I’m on a little island. Alone. To do yoga. Why the hell is this mosquito net trying to swallow me whole!? I made a decision to take it down and rely solely on lathering myself with coats and coats of mosquito repellent before bed each night for protection. (And honestly, I missed one night and noticed while bent over in morning yoga I had 11 bites on my right foot and six on my left. Surely I have malaria. Especially with my luck these days. 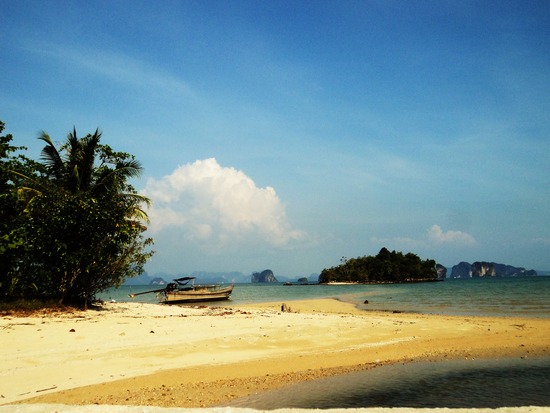 I pressed onto my iPod to see what time it was (as I had not yet realized that although my Blackberry didn’t work in Asia, I could still use the alarm clock functionality) and found it was 7:11am. I had 19 minutes until morning meditation started. And I was not about to miss my first meditation class. I had taken one meditation class back home, and I suck at it. (For those of you who don’t know me, my mind can be a bit busy sometimes… maybe? Just a little?) All the more reason for me to show up to these sessions, learn to quiet this mind of mine. And so, I left my hut, without even brushing my teeth I’m sorry to say (thank goodness it wasn’t too crowded in there and no one had to get a whiff of my prana breathing) and made it just in time to pull up a pillow and sit myself down, cross-legged.

David taught the morning meditation. Oh, David. He was wonderful. For those of you Yoga Passage yogi’s (my studio back home in Calgary), he reminded me a little of Tracy. Except he smiled, so much. Not that Tracy doesn’t crack a grin, he definitely has a sense of humor, but David smiled, all the time. With every bit of yoga philosophy, every bit of wisdom he imparted onto us, he beamed like a seven-year-old boy telling his parents about what he had learned in school that day. (Seven? At seven do kids still get excited about what they learn in school? I’m not sure… but you know what I mean.) 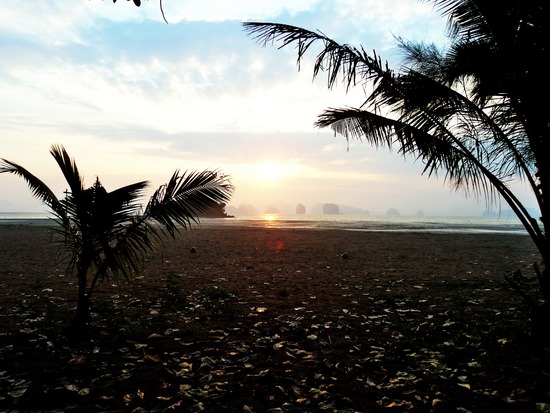 First we meditated by breathing through one nostril and out the other, as I had learned at my Sattva Yoga classes at Yoga Loft in Edmonton (if you ever get the chance, please go try as they are, to this day, my favorite yoga classes). Then we meditated by breathing white energy int oour heart chakra and up into our throat, third eye and crown chakras. With my eyes shut and my breathing deep, the color that seemed to flood the backs of my eyelids on my exhales was not white at all though… it was a deep blue. I’m not sure if that means I was doing something wrong? But I wasn’t about to interrupt the meditation to ask about colors. To finish off our 30 minutes, we meditated on the sound “soooo” on our inhales and “ommm” on our exhales. I liked this the best. Nice and simple. But enough to focus to keep my mind from wandering off to thoughts of Keely’s wedding or what souveniers to buy the kids or how much I wanted to tell Kevin about this amazing meditation experience. Haha. Yes, my mind did go to those places. It did wander. But I have to say, for my second attempt at meditation, I think I did a pretty good job at bringing it back again to the “soo” and the “omm”. I know from my experience with yoga you have to be patient with your body, and it’s the same with your mind. Determination and focus are important, but we must be patient. We must listen to our bodies and watch our minds.

David taught the morning and the evening yoga that day as well and he talked a lot about humility. The iportance of letting go of your ego and personality in meditation and seeing things objectively. Removing the emotion and mediating on the facts of the challenges you may be facing.

One of my favorite things he said, which someone he had met had actually told him was: The spiritual journey is a serious one, but don’t ever let yourself suffer from seriousness.

His smile broadened and we all had a giggle. 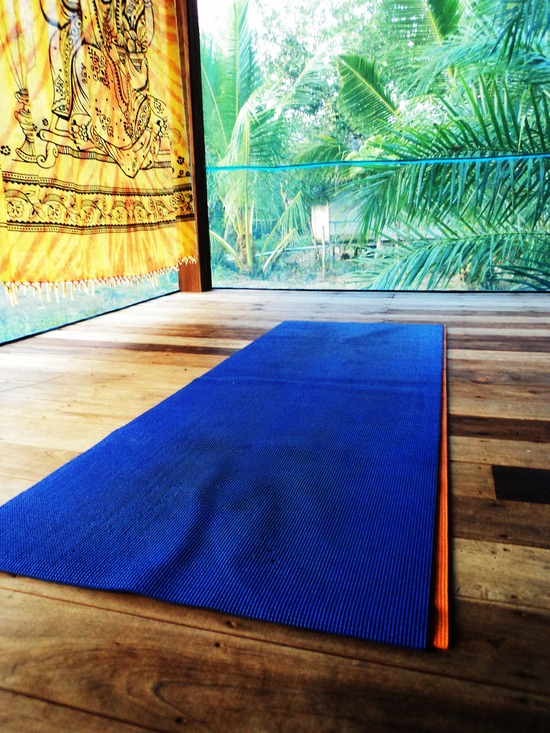 It was Friday night at David had invited anyone who wanted to stay after class to join him in an “Om Circle”. I had no idea what an “Om Circle” was, and interestingly enough, when I started yoga a few years back, my least favorite part was the “om’s” and the chants. It all felt a bit strange to me to be in a room speaking or chanting to something or someone amoungst people I wasn’t sure I shared any beliefs with, meanwhile not even really understanding what it was I was saying. But, I figured, I came here for yoga. For meditation. I intended to step forward with an open heart and an open mind and thankfully accept any experiences that were being offered to me. And after a full day with David, I was a little bit hooked on him. So I figured, what did I really have to loose from 45 minutes in an “Om Circle”?

I’m so glad I stayed.

David brought out some kind of drum instrument with a single string that he played to keep a basic beat and pitch for us and we all inhaled and exhaled in “om’s” to our own pace and at our own volume. Everyone took turns sitting in the centre of the circle for a few minutes to just “bathe in the sounds” as David put it so beautifully> And let me tell you, it was a really magical, uplifting experience. The voices surrounding you just seemed to carry you, so it felt as though you were weightless. Not floating. Grounded. But weightless.

When we had all had a turn in the centre of the circle David lead us in a chant that we all sang together. In my mind I questioned it, the chanting, being unsure of what it was I was chanting and who I was chanting to, but I let go of my doubts and just sang. I projected my voice. I figured if I was going to do this, I wasn’t going to do it half-assed. I let go of my ego and I just sang along.

It was a really beautiful day. My only disappoinment was that there was not another “Om Circle” scheduled during my time at the retreat. But at least I can be thankful I got to be a part of it. So, so thankful. Here I was on a beautiful secluded island, in the south of Thailand, living each day in gorgeous weather with warm air where winter and cold were just distant memories, practicing yoga and meditation and being good to my body, eating healthy, and surrounding myself with beautiful individuals on journeys of their own.

And I couldn’t wait for meditation the next morning. 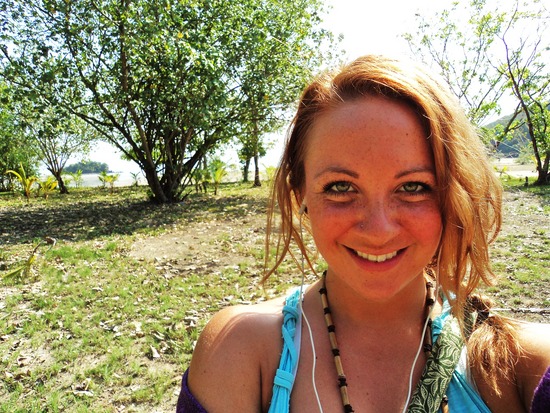