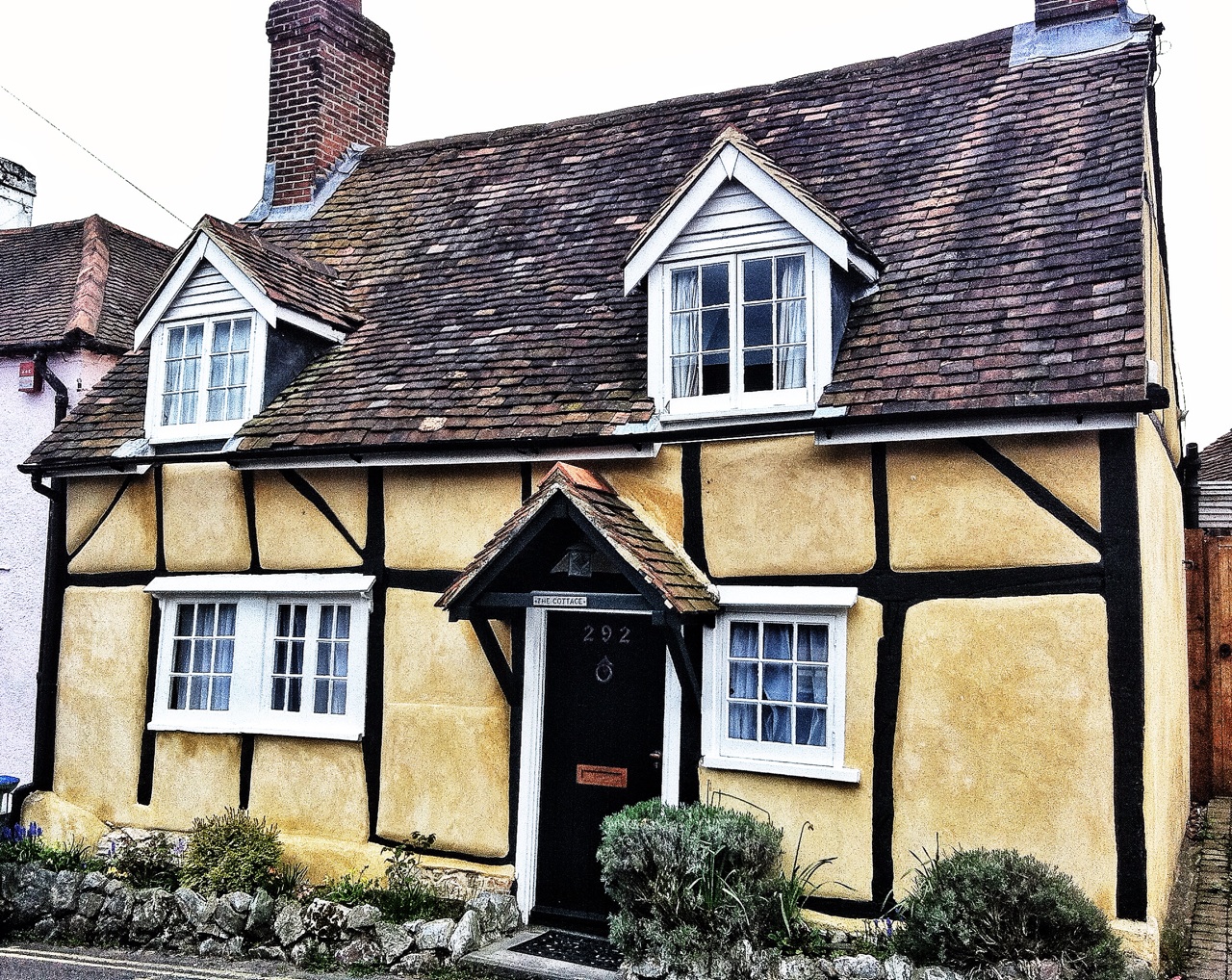 Rob woke me up with a cup of tea that first morning there (of course, tea… i forgot about the English and their tea). I checked my clock and to my surprise it informed me I had been asleep 10 hours! Shocking considered I felt as though I probably had another 4 or so left in me.

Hello, Jet Lag! Up until now I must have smothered you with wine. But here you are, to bite me in the ass.

I attempted to push through the jet lag, as best as possible and got myself dressed and ready for our day. Rob had taken the day off work and was planning to take me out an about the south coast on a quirky little adventure.

It began with breakfast, an important start to everyday and one I enjoy very much–especially on holiday. I think, in a perfect world, breakfast should be served in and around 11am (to allow, of course for an oh so indulgent sleep in) and should include all of the above:

Eggs
Bacon
Hash browns
Hot sauce
More bacon
A huge glass of orange juice (real orange juice… Not the crap that’s served at pubs mixed with vodka and called a “screwdriver”)
Water, of course
And a coffee, with Baileys

But hey, that’s just me.

Anyhow, just as I showed him how Calgarians like to brunch when he visited us in January, he took me out for a small town English experience. He recommended the tea, which isn’t as simple as it sounds. It comes with tea (of course), a scone, a couple cucumber sandwiches and a piece of cake, all served in a cute little 3-tier tower. Holy pastries!? Haha!

Well, as cute as it would be to participate in such a charming little English tradition, my gluten-sensitive stomach took one look at that trolley of wheat products and cringed, so just Rob had the English tea (so at least I could be some part of the experience) and I went with a Bubble & Squeak. (Yes, that’s what it was called. It’s some sort of traditional English breakfast dish with egg and vegetables that sort of resembles the inside bit of a quiche. I inquired about the funny name and Rob explained that it’s sort of how it sounds… When you eat it. Random fact for ya.) Oh and it must not go without mentioning that this little cafe of sorts also served an Irish Coffee Shake! More boozy milkshakes! Again, how has this yet to catch on in Calgary?! 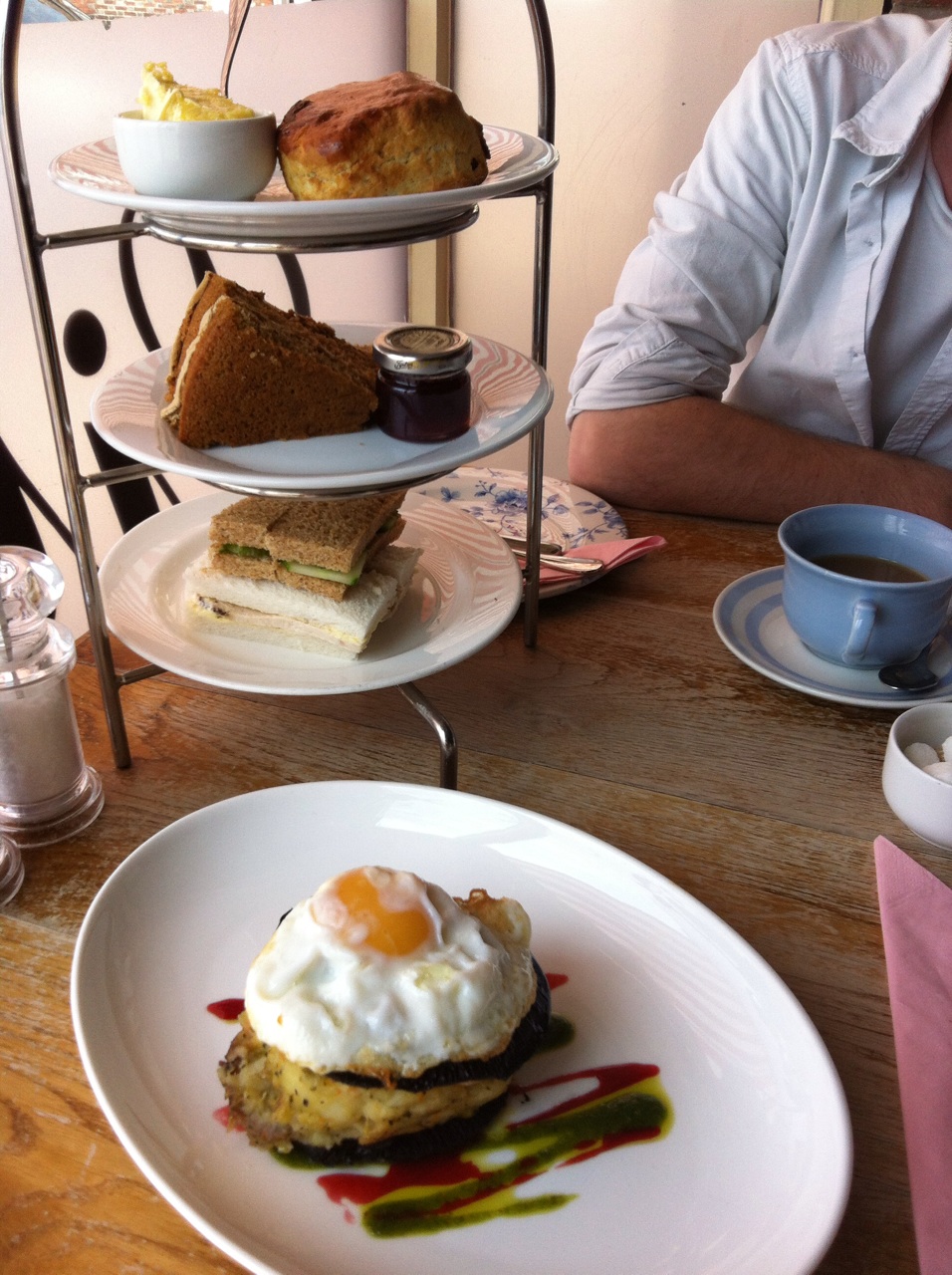 Well now that I’ve chatted on for four or so paragraphs about breakfast… Moving right along?

We drove out to Stonehenge next. It was maybe an hour from Robs place and the countryside is such a beautiful drive, so it went by quickly. I had been warned that while the Stonehenge was quite a cool sight to see, it really is a big field with rocks in it.

Significant rocks, with an interesting story, that are sort of miraculous, but it’s the kinda thing you show up to, look at for a few moments and move on from, so if this is in your itinerary, it’s really important to take in the drive as well and not look it simply as a destination. All of the above was accurate. I generally avoid tours and guides at these types of things, however here, I would recommend taking the free audio set. Yes, you might look a little silly wandering along, pausing at the different points of interest listening to a recording, but the literature we were given didn’t contain much information, so now I don’t really have all the good a grasp on the story of how that sight came to be. So something to consider. I did hear about summer solstice at the Stonehenge… When they take down the guard rails (which really is just some string staked out about a foot off the ground) and a bunch of hippies hang about it touching the rocks and staying up through the night. Now THAT seems like a cool way to see this particular world wonder and has been added to my agenda for next year! 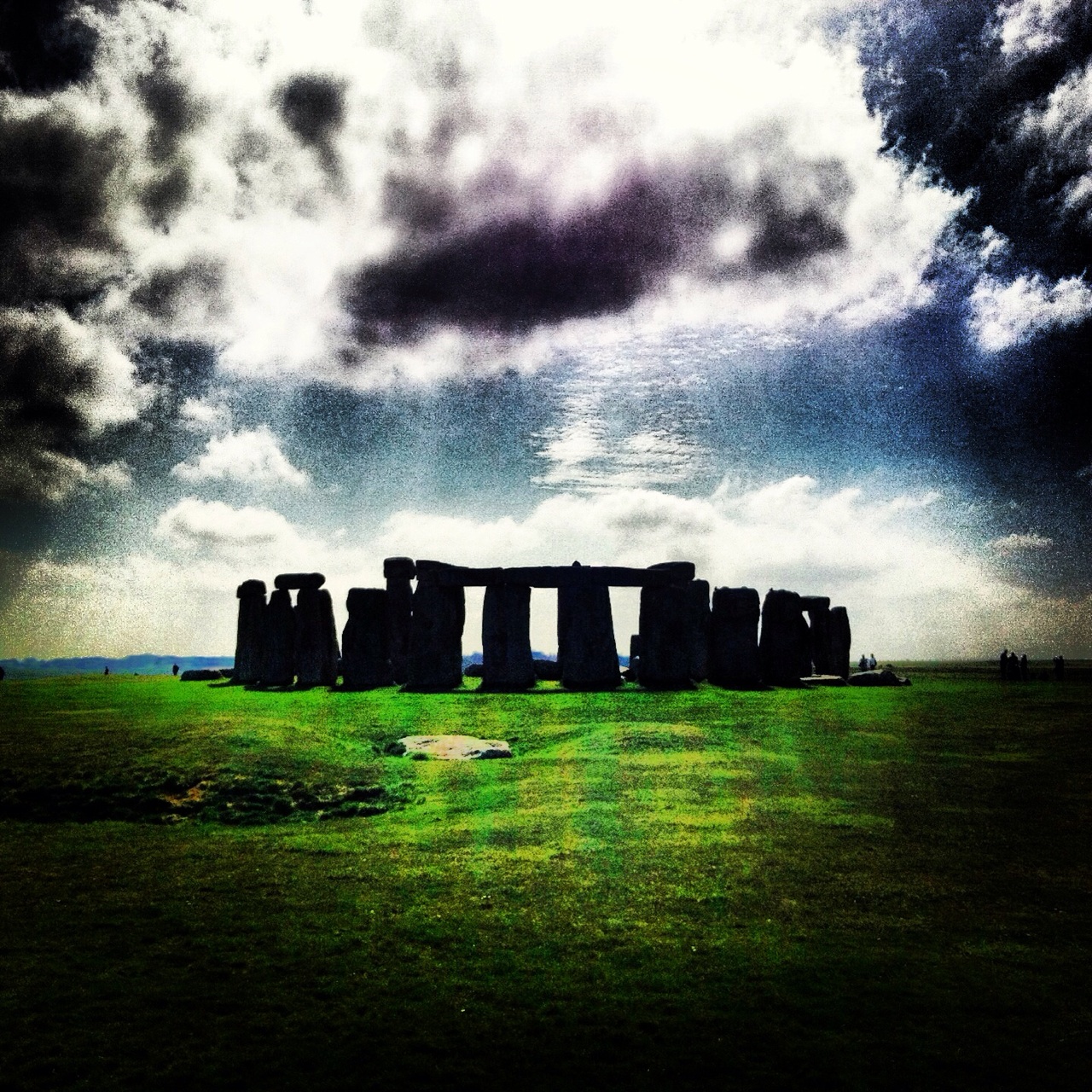 Next up on our busy day, we took a little wander through the city of Winchester. Now this is somewhere I’d like to come back to. Winchester is the original capital city of England, until at some point, years ago, some king or queen decided to move it to London. (I’m such a history buff hey?) Now it’s more like a not-too-small, not-too-big university town, full of parks and shops and a big, beautiful cathedral. I could picture myself loitering on terraces, writing and sipping wine for hours on end, but alas, our busy day did not allow for anything more than a little taste of this place. Trips are just never long enough….

Final stop for the day was into Jody’s parents (The Poulter’s) house for a quick motorbike ride and a cup of tea. No, Jody wasn’t there, and I can’t remember exactly how this idea came to be, but Jody had mentioned something about her trip with her dad, riding in his side car, I mentioned that I’d love to ride in a side car, and being the wildly generous people they are, Jody and her parents arranged this little visit for me! Oh the random things we find ourselves doing on holiday! Jody’s dad sped us around the town and out to the rocky beach, where the mist was so thick we couldn’t see anything past the shore really. I didn’t care, to be honest. I was sitting in a side car in southern England with the sweetest tour guide/taxi driver/man in general. What more could a girl ask for, really?

After our chilly little cruise, the Poulter’s had us in for tea. Jody’s dad brought two cups into the living room and specified that the one with the little lambs on it was for me. (So that means he had thoughtfully reviewed his teacup collection to select just the right one for me… Umm, can this story get any more adorable??) Jody’s mom (aka the sweetest lady in England) proceeded to brief me on their entire life story in the span of only an hour. I’m not sure how she crammed it all in, but she had me hanging on every word. (When I saw Jody the next day she was shocked and amazed at how well versed I was, and informed me that her mom was well known in their family for being able to make any short story a long one. Hehe!) 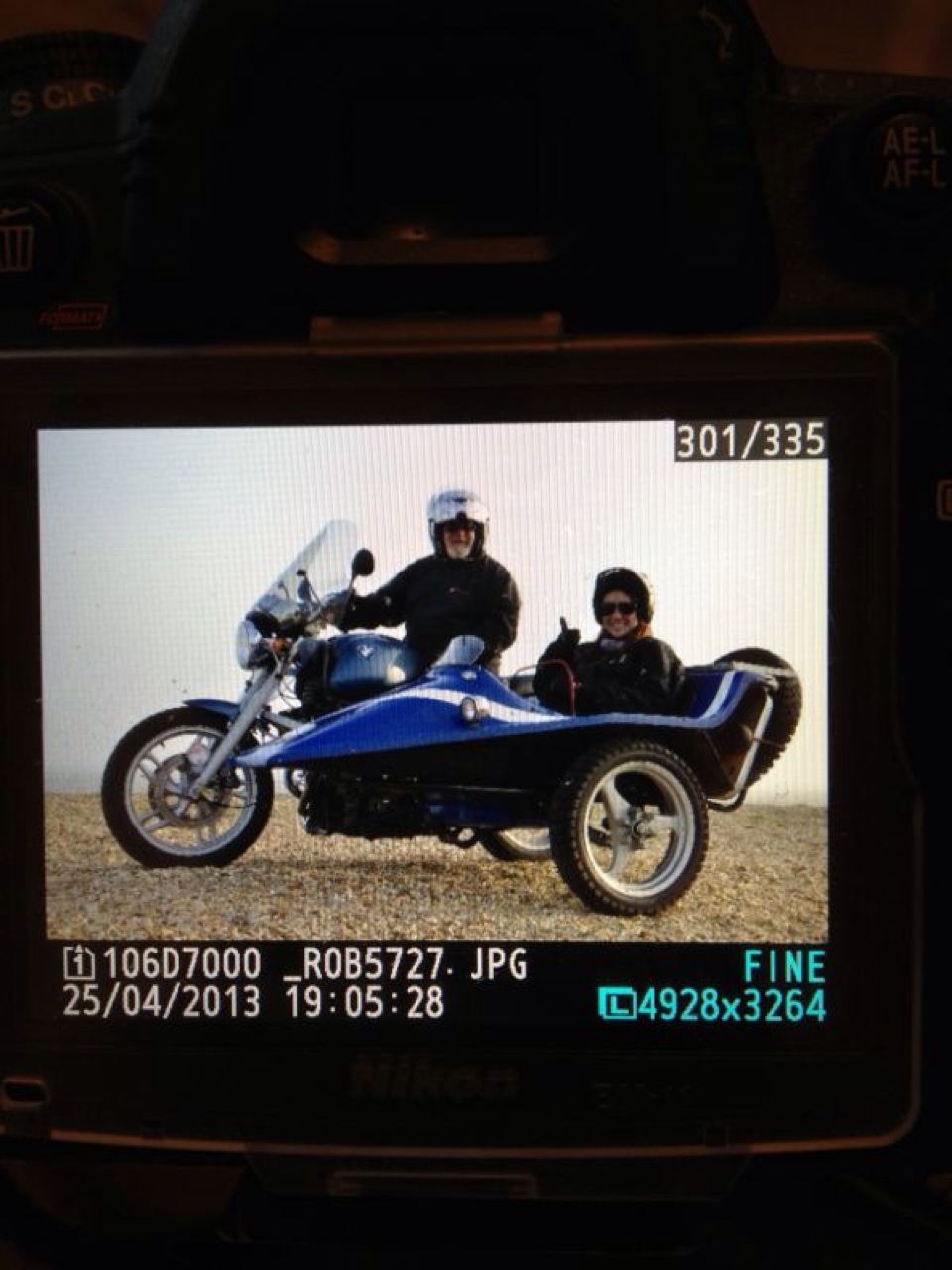 Probably one of the best bits of my week in England, that darling little visit with two strangers who treated me like family and talked to me like an old friend, no questions asked, no concept of social awkwardness. It’s people like this and experiences like that that make traveling worthwhile. Thanks to Jody and the Poulter’s for making me feel like such a part of the family! And to Rob for touring my jet lagged ass all around the south coast! MUAH!