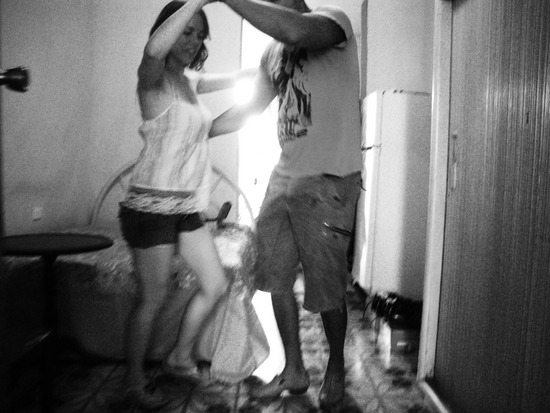 You know what they say – you don’t know a culture until you’ve been invited into someones home. So late Sunday morning, we enjoyed a hot (actually hot, not warm) shower and caught a coco taxi for 8 CUC out to our new friends house (which turned out to be in Marianeo, a 25 minute drive just outside the city).

Oh wait – a coco taxi. That should really get an explanation. Basically, there are three types of taxis in Cuba.

- The unofficial taxis with almost no markings on the sides of the 1950s classic cars that are barely holding together.

- And the coco taxis which are little Pacman-shaped, two-seater motor bikes essentially – by far the most fun as you ride along on a hot afternoon with no windows blocking the breeze while video game theme songs play on in your head.

We showed up at an unassuming casa door that matched the address scribbled onto a napkin from the night previous and knocked tentatively. Yuriama’s sleepy face and tight yellow halter top with spilling cleavage appeared in the window. A bit of shock and surprise evident in her eyes. Nevertheless, the greeting was warm and we were ushered in through the wrought-iron door into a tiny living room that barely fit the love seat, two chairs and ancient little TV it was fitted with.

We sat down and sipped the glass of Baileys she had given us as they promised to be out in just a moment and shut the heavy wooden door leading into the rest of the house (which we found out later consisted only of one more room with a double bed in one corner and some kitchen cupboards and a stove in the other, as well as a thin backyard with lines of laundry, tanks full of fish and a bathroom with no door). Youcel, Yuris’s brother in law, who lived in the semi-connected house next door with his mom, greeted us with kisses and left to pick up food and beer – refusing to let us contribute any money. We sat in the living room. Just the two of us. Not sure how the rest of the afternoon would go. Yuri kept poking her head in, with a brush in her hand or a container of eye shadow, promising to be out soon. It became apparent pretty quickly that although the invite was sincere, they didn’t really expect we would come – or at least not on time! (Meanwhile we rushed through our morning afraid to be late and seem rude! Haha.) This is Cuba and Cuba runs on Cuban time.

The difficult chatting (which seemed to come so much easier the night before after mucho cervesa and sweaty dancing that seems to break all barriers) finally found a bit of a flow as they carried in a wooden table and borrowed a set of Dominos from the neighbors. Yes, we spent the afternoon playing Dominos. Six adults sitting around a table playing Dominos. So classically Cuban that they actually sell wooden figurines set up in such a scene in the souvenir shops. 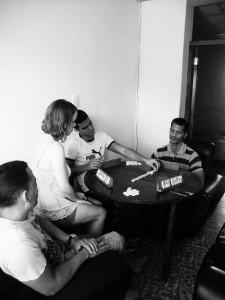 At some point in the afternoon, Rolly (their friend) arrived with his plastic, label-less bottle of cervesa and his adorable four-year-old daughter who stole our hearts immediately as, in her little Spanish voice, she asked our names. A little later than that, Madre (mom) came home and after a round of kisses for everyone (ourselves included), her and Yuri disappeared to make lunch, refusing our help but suggesting we turn up the music and spend some time dancing. Haha. So, we got up and all walked into the kitchen (yes, imagine how awkward this sounds right now) and began to dancing in and around the kitchen in the middle of the afternoon as per the carefully constructed itinerary they had crafted to entertain us. 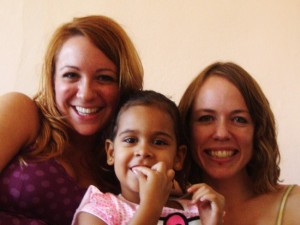 The little girl took a break from twirling in Savannah’s arms and found my camera and proceeded to shoot every window, every bit of floor, every fish, every face – every moment, until the battery was good and dead. We finished our heaping bowls of pasta and called a taxi and chatted lazily, all leaned back clutching our very full bellies.

After the tightest of embraces and big, affectionate kisses, we watched them all wave from their veranda until the taxi turned the corner.

Oh oh oh, how I love that family. Beautiful and big-hearted. 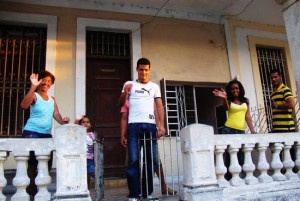 After a nap and a change of clothes, we decided to head into Habana Vieja (Old Havana) to add some more culture to our day – from a bit of a different angle. 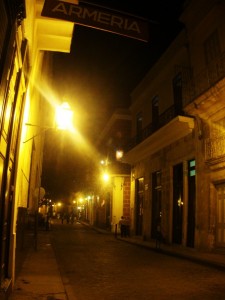 We wandered through the streets, without a destination in mind or even consulting our map, and just as our tummies started to rumble again, we found, in a thin alleyway set against a red brick wall, Cafe Lamparilla...

…where we spent the next five hours.

The menu featured a long list of tapas, nothing costing over 2CUC. We ordered about four items, and a bottle of champagne, because, why not. We were on holiday after all.

Three men in dark blue suits and whit shirts stood at a nearby table serenading the crowd as we ate with soft guitar, bongo drums and some maracas to spice it up. We sat, enchanted by the entire scene, as the cheese and olive oil dissolved in our mouths. Sensory indulgence at its absolute height.

The time ticked on. The champagne ran dry. So we ordered a jug of Sangria and a bowl of chocolate ice cream.

… Followed by about eight more tapas. Bruschetta. Serrano Ham. A plate of olives. Curry rice with bacon and chorizo. (Savannah wouldn’t be Savannah without adding some bacon to the mix.) Papas rellanas (aka balls of potato-y goodness – the ultimate comfort food). Chicken skewers. Smoked salmon. We just kept eating and kept ordering.

And, well, the price was right to enjoy a limitless meal. When the bill arrived, finally, haha, it presented a grand total of only 37CUC! We tipped to 45CUC and the patient young waiter was so blown away he brought us out a round of mojitos and a plate of olives on the house. As we finished up, the band pulled chairs up to our table and proceeded to compose us our very own love songs (which thankfully we have on video).

Does a night really get any better than this? 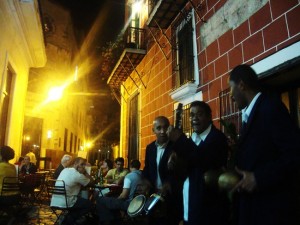 Well, the only thing missing was dancing. So, following our waiters recommendation, we head into Centro Habana to the Casa de la Musica. A stunning venue, but overpriced entrance (10CUC), overpriced drinks (4.50CUC for a mojito!) and not enough people to fill it up. Although, in fairness, it was a Sunday night. Perhaps it would have lived up to its reputation on a weekend.

We did enjoy ourselves and our one mojito as the bouncer from the club the night earlier (you know, the night where we danced and sweat so much we couldn’t retain any of the rum we were consuming long enough for it to take any effect) recognized us and invited us to join him and his girlfriend, her nephew (who was celebrating his birthday that night) and their big bottle of rum. So that’s what we did. There was a little salsa throughout the evening, although not nearly enough, and by 2pm our rum-filled bellies told us it was time to turn in.