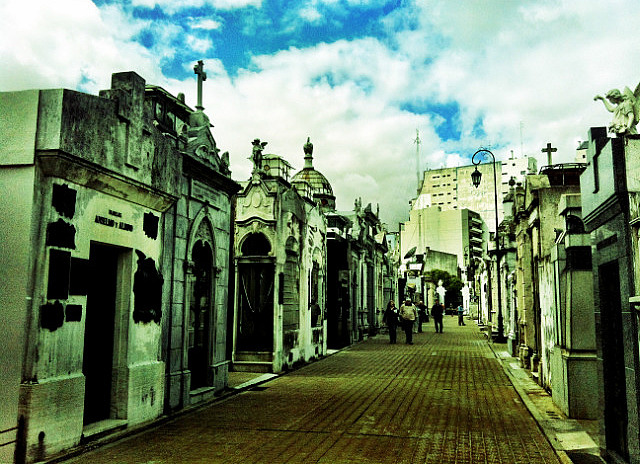 In an attempt to get out of our comfortable little casa and see some of the classic tourist sights here in Buenos Aires, we tore out a piece of looseleaf paper and made a plan. A plan for our week. Something I generally try to avoid while traveling, but at this point, I knew if I left Buenos Aires and hadn’t seen a tango show, that’s something I would have regretted. And it probably wouldn’t have been because I was too wrapped up experiencing other parts of the city, but because for whatever reason, this city makes me feel lazy. So I would have probably spent Tuesday night hanging around the house. Speaking English. With my roommates. Great from time to time, but not how I want to spend every night of course. My time here is limited.

So Tuesday morning we set an alarm and dragged our lazy asses out of bed. The weather was cold. And when I say cold, I mean about 15 degrees Celcius. I mean, I had to wear a sweater, for a portion of the day. And I wore full pants rather than shorts. So, don’t feel that bad for me.

We followed my handy little Google Maps app that lead us to the Cemetario Recoleta. Probably the only thing I know about the history of Argentina is the story of Evita. And when I got here, all I really had was a faded memory of getting to stay up late one Friday night to watch the movie with my mom when it had just come out. I knew Madonna had played Evita. And of course, I knew the song. (I’m afraid to even type the lyrics right now because that’s the kind of song that once you hear, you cannot get out of your head, and I don’t want to drive myself absolutely mental.)

So, we knew when we arrived that was one thing we wanted to check out. Take in a little history and visit Evita’s grave. We watched the film one night last week (which by the way wasn’t as good as I remembered… I sat there and pretended it was realistic that a group of strangers would all know the same coreography and lyrics just because they’re caught up in the moment. I have a tough time with musicals sometimes.)

We watched the film. Got an idea of the story. And then “googled” up on it a little more. Learned a little more about the politics of that time. It was actually pretty interesting. Check it out on Wikipedia if you’d like more information.

So we walked to find the cemetary, which was just north of our school. We opted out of paying for a map of all the graves as we knew we weren’t going to recognize any other names in there and figured we’d be paying 10 pesos just to get pointed to Evita’s grave… which would end up being the one the crowd of people were hanging around. The cemetary was beautiful inside. We took loads of gorgeous photos. Each grave was more like a little monument. You could see that some of the people were buried with some of their favorite things. We wandered around, keeping our eyes out for the crowd. And within maybe 15-20 minutes, we spotted it and waited patiently for our photo op.
So, that was cool. There she was.

After wandering around a little more, the experience began to transform from enchanting, to slightly morbid. From airy and exciting, to heavy and sad. Rather than imagining all these peoples lives, I began to imagine them laying there, dust and bones, inside their coffins. And how close I was to all of that. To all these people who had died. And it just struck a little too close to home, too close for comfort if you will. So we said goodbye to Evita and the rest of the passed on Argentinian people and went in search of a coffee.

I needed to take a slow breath and get back to real life.
Tuesday evening we woke up from our post-school siesta to another alarm. We had a plan of course, as it was still our last week here. We were going to a tango show. I was very excited. I have spent most of my life dancing in some way, shape or form. When I was younger it was a long list of different classes and styles all with corresponding competitons and costumes. In my more recent years I’ve stuck to salsa. It’s sexy and forgiving… and rather than spending my time at studios, I get to spend my time at bars. Hehe. There is something fabulous about that. I have dabbled slightly in ballroom, but my knowledge and experience in that department is pretty limited. I have seen the tango though, and the passion in the dance, and that’s something I love. That I can appreciate.

I was very very excited to go to this tango show. To see it live and proper, in Argentina.

And it was everything I imagined, and more.

The band seduced us with their music. The accordian player had his eyes closed, focused. The violinist cast a shadow against the brick wall as his whisked his wand back and forth across the strings. The singer belted out the words and phrases from all the way down in his big, round belly. And it didn’t matter what he was saying. We all felt it. And the dancers… were perfection. Quick and angry, slow and passionate. They told stories when they danced. They threw in some acting here and there. It was entrancing.

Similar to the flamenco show we had seen when we first arrived, this show was also performed in a dark little basement room. We snacked on cheese and sipped red wine during the show, and when it was over they took our food and drink upstairs to the “cafeteria” area so we could finish up. As we sat upstairs in the cafeteria, we were able to take in where we were. This place was called Cafe Tortoni. It had been open since 1858 and did a good job of maintaining the old look and feel of the place. The wallpaper, the moulding, the pillars, the stained glass; they all had years and years of stories layered within them. Of events and people and faces. The walls were lined with photos from over the years. And the servers even walked around in bow ties and cummerbunds.
I highly recommend a visit to this place if you come to Buenos Aires. This is the way I prefer to feel the history of a country, I think. Being in a place like that you can feel it. You can imagine it. What it used to be like. What the people used to be like. I find it a little harder to do that at a cemetary. And isn’t that how we all want to be remembered? By how we lived, not how we died?