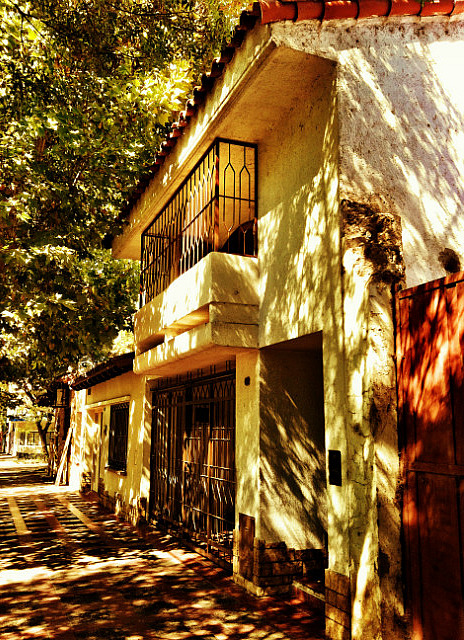 I can’t believe I’m back here.

It’s been just over three years since my first backpacking trip and ended up falling head over heels for a quiet little city nestled in Argentina’s wine country called Mendoza. I always said I’d be back, and here I am.

I woke up Sunday morning, chilly. I was sitting in the window seat on the semi-cama bus we had boarded the evening before that was taking us from Buenos Aires to Mendoza. It was early and the sun was just rising, but I calculated that I had actually managed to sleep for about 9 hours, which is pretty fabulous considering it was a red eye bus! I pulled my greasy bus hair back off my face and sat quietly, munched on some cold pasta we had brought with us for the ride and gazed out the window. I’d love to tell you that the view was to die for, and I lost myself in it, but it was less than impressive actually. It looked like the prairies. Bleh. I had romanced the whole moment of waking up in a bus in the middle of a country in South America to Val, comparing it to when I woke up on the bus in Peru driving through the Sacred Valley, but as it turns out, rural Argentina, at least wherever we were, wasn’t all the gorgeous.

Luckily, however, Mendoza was gorgeous. Just as gorgeous as I remembered. There were big green plazas everywhere. The roads were wide. The sidewalks were made with white tile and were bright and clean. (Compared to the sidewalks in Buenos Aires, they reallly seemed to sparkle here.) Towering old trees lined the streets and draped themselves over the roads, dangling green and orange leaves above the cars below.

We got in a taxi and gave them the address to our new home for the next two weeks. When we booked we had requested a student shared apartment, just like in Buenos Aires, but about an hour before we left we found out that they don’t actually have shared apartments in Mendoza. Only home stays. This meant we would be living in a little bedroom at some woman named Rosanna’s house, just down the street from our school. We thought maybe other students would be staying there as well — opportunity for socializing — but turns out the person occupying the room next door to us was her 13 year old daughter. A sweet little girl with a big teenage crush on Justin Beiber.

Oh, and then there are the dogs. Flauto and Samantha. They’re huge. And extremely forward. The first day I arrived, Flauto jumped up on his hind legs with his front legs out in front of him, one resting on each of my shoulders and head butted me, bang on in the nose. It took all of my strength to hold back the tears that seems to come immediately after getting hit in the nose, and brush it off, in Spanish none the less, so my hosts didn’t feel too bad. Since that first greeting, I have sort of kept my distance from these guys. Which seems to make them love me even more. They follow me around, lick my legs, smell my “area” and breath on me constantly. Don’t get me wrong, I don’t hate all dogs or anything, but this behaviour was less than charming, I have to say. I need to get these guys some gum.

Today was an exceptionally awkward day for me and the dogs. After a lazy afternoon reading and laying out in the nearby park with some of the girls from our school, Val and I came back to our casa and had some food and cold beer in the backyard. Rosanna and her friends were inside making chocolate easter eggs, so the dogs were out back with us. Awesome. They sat down near the table, too close for comfort. And stared at me, pretty much at my eye level, as I ate my cold pasta (yes, we eat a lot of cold pasta). Just stared. Having people watch you eat is uncomfortable. Having dogs watch you eat, especially that close to your face, incredibly uncomfortable.

We had heard Rosannah say “Salir” to them before to get them away from the door, and that seemed to work, so we tried that. Fail. Nothing. Eventually they did tire however, and laid down near our table to rest.

It was Val who noticed it first and pointed it out to me. Samantha was laying down, licking at her paws. Flauto was licking himself too. But not his feet.

I am completely one with nature today. In one afternoon I have been shit on by a bird in the park, watched a bee get mauled to death by both dogs and then witnessed one of them having his way with himself. My goodness.

Other than the somewhat odd living situation, this first week in Mendoza has been lovely. We found ourselves a local spot on our very first night in town. It’s a cocktail bar near the main plaza called Cachita’s. They have a sidewalk patio and an extensive cocktail list, and the staff likes to send us out free chocolate mousse. So, naturally, we frequent it. (I seriously need to hit the gym hard when I get home. Or let it hit me. Or, I don’t know.) We only had three days of school this week (because of Pasquas… you know, Easter), and guess what? Dun dun dun.

We are in morning classes here.

Thankfully, we live only two blocks from our school, so we can sleep in until 845am if we absolutely need to. But after these last few weeks of sleeping until noon, it’s been a bit of an adjustment. Granted Mendoza doesn’t have as much nightlife as Buenos Aires, but when they go out here, they still do it ridiculously late. Which means there has been one night this week where we rolled in around 6am. Luckily, we didn’t have class that morning. We had a wine tour.

It’s amazing what your body can do after only 2 hours of sleep. We managed to bike to a wine museum, an olive shop, do a winery tour, two tastings and stop for lunch at a beer garden. I even had a shot of Absinthe at the olive shop. Thinking about it now, I have no idea why they had absinthe at an olive shop. But they did. So naturally, I tried it.

The last winery we stopped at was Tempus Alba. Sigh. My favorite vineyard. We stopped there on my trip here three years ago and I fell in love. With a wine. Called Pleno. Pleno is their signature wine at Tempus Alba. It’s a blend of Cabernet Sauvignon and Malbec, both of which this region is well known for. I have a reserve bottle sitting on my wine rack at home right now. And that day I picked up a few more for mly collection of this year’s release.

Okay, all this wine talk is getting to me. I think I need a glass.