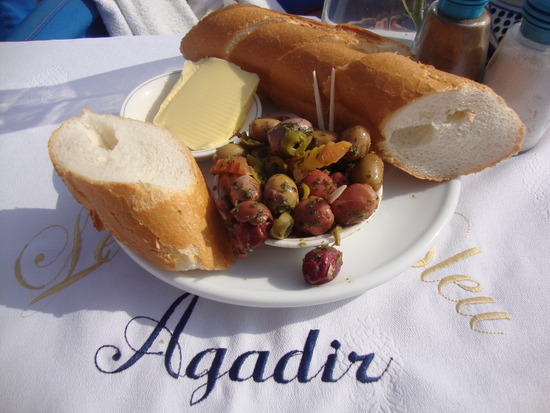 We pulled up to Residence Fluerie, so looking forward to a few days of completely vegging, getting some sun and hopefully, even recovering from my head cold. We found Residence Fluerie on hostelbookers.com and booked it for about 20$/night. Our room was simple and clean, fitted with 2 twin beds, a balcony overlooking the pool and a kitchenette. We set up our bags and unloaded a little, thankful we’d be staying put for a few nights finally. Starving, we walked down a block to a restraurant recommended by Lonely Planet called Mezzo Mezzo. We welcomed the break from tagine, and with the memory of last nights cheesy delight lingering, we thought Mezzo Mezzo, a bit of a higher end pizza restaurant, would be just the spot. It was a lovely dinner that we accompanied with a bottle of rose wine and of course, the classic Moroccan starter to every meal, a bowl of olives.

After dinner, we started to stroll down the boardwalk but made a quick turn for home after the few men, some a bit wasted, on the otherwise abandoned street followed their cat calls by approaching us and putting their hands on our backs. Eeesh! Ahh well, at home we managed to find one English TV channel that constantly played old (well, somewhat old) movies featuring B-list actors with Arabic subtitles running along the bottom of the screen. Over the next four days we watched the likes of Extreme Ops, Single White Female, Elektra, Get Rich or Die Tryin, Pacific Heights, Marked for Death and maybe a few more I can’t recall just now. No, we did not spend our entire time here watching shit movies, but it’s nice to have the TV playing during post-breakfast naps, post-beach rests and before bed, since our nightlife experiences in Morocco mostly included the two of us, in bed, chatting away to only each other. Haha, oh so exciting, I know. But going out on the town in Morocco pretty much requires you have a man. I know, way to make us feel like capable human beings. But just imagine the cat calls and harassment we see during the day walking the streets, now add alcohol after sun down. Doesn’t sound like where I wanna be. 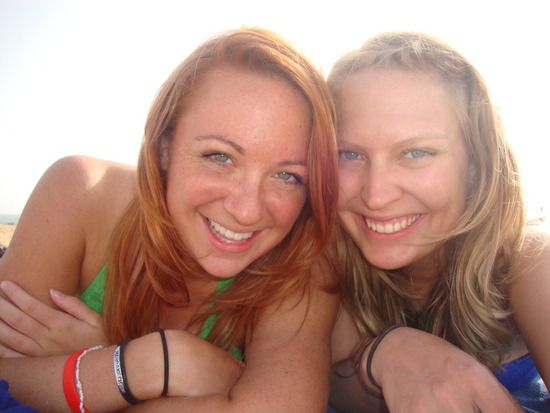 So our time in Agadir was pretty much spent the same each day. Serious relaxing. Woke up late in the morning, stumbled down for breakfast (can you guess what we were served??), back to the room for a nap. An hour or so later, we’d take a 60 cent taxi to Palm Beach, rent two lounge chairs and an umbrella for 40dh for the day from “the Rastaman” and his friends. They lived in white tarp tents right on the beach and ran the business. We’d lay all day in the sun, with the breeze making it more comfortable in the heat (but also the blame for a sunburn here or there as we didn’t realize how hot it really was). We’d put Tracy Chapman or Bob Marley (Rastaman’s fave) on the iPod speakers. The Rastaman and his friends spent their entire day sitting at our feet, enjoying our music and chatting relentlessly to us. We told them we had boyfriends in hopes that would deter them, but not in the slightest. Moroccan men are absolutely persisent. They marveled at my iPod and asked how much it cost. I told them about 2500dh. They said that would take care of their family for a couple months. Suddenly, I felt guilty.

At dinner time, we’d head out, usually to the English Pub (this place we found and went to at least once a day, haha. I know, way to venture out and be cultural right?) There server there got to know us very quickly and actually prepared my meds for me whenever we were there. (Our first stop in Agadir was actually the pharmacy so I could do my best to describe my symptoms through broken French and hand gestures in hopes of some cough syrup and sinus medication. I think it was a success as my symptoms certainly lessened immediately allowing me to participate in life again, although sitting here in London, I still have a cough and I’m currently reaching for a kleenex….) The local Moroccan beer, Flag 33, sells for only 26dh! A bargain! In Agadir it’s so touristy, everywhere serves alcohol. And everyone wears bikinis.

Monday night, our friend Simon in Taghazout messaged us to say him and some others from his hotel were coming into Agadir for a night on the town (Agadir even has night clubs!). We met them at the English Pub and ordered jug after jug of Flag 33 and watched/sang along to the kereoke in the packed little place. There were 2 English girls, an Australian girl, Simon, and two tag-alongs we met in the pub, one from Britian and one from Belgium. We had a nice little group going and the beer was flowing. After the last song of the night, a rendition of Baby, Can I Hold You by Tracy Chapman, the “ugly” lights came on and we realized wed had to find somewhere else to continue the party. There was a club across the street called Actors and we all filed in. The DJ was playing a mix of Western and Moroccan club music and we danced until we sweat through our clothes. Around 4am we caught a taxi home and lay down, blissfully exhausted, on our little twin beds. 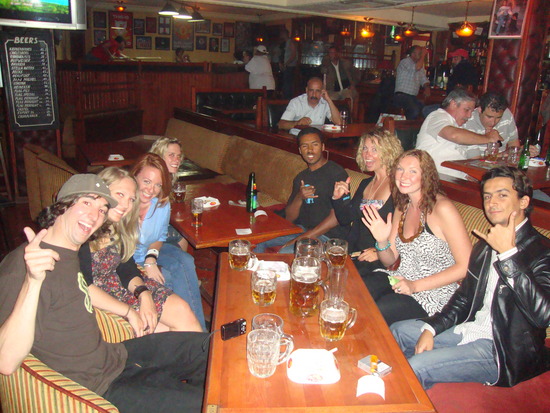 On our last day in Agadir, after our four hours of sunbathing, we head to the bus station in hopes of finding a bus to Essaouira (a surf town further up the coast). Just our luck – there was a bus leaving in 10 minutes. Was it Supratours? Ahhh, of course not. The only Supratours bus leaves at 8am. So we paid the questionable-looking local men and were stuffed once again into the torn-up dirty seats amoung men, hijabs and crying babies and tried to get some shut eye as we drove three hours along the coast. If Agadir was our little break from the real Morocco and all the culture we’d been missing eating at the English Pub and sleeping our days away, this bus ride was our wake up call that we were still there, still in Morocco, with still much more culture to discover.