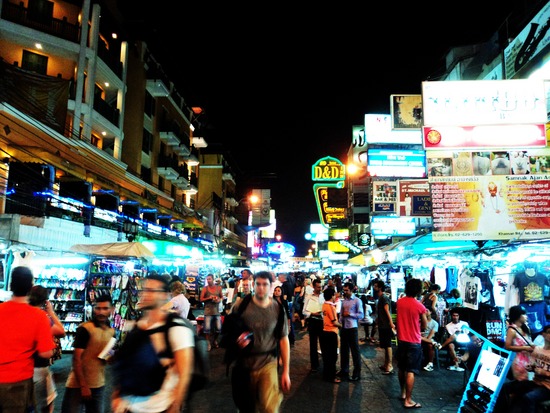 I left Cambodia and traveled by bus across the border at Poipet and into Thailand. The busses were jam packed and so I ended up sitting in a fold out seat on the steps into the bus next to the driver which made sleeping impossible and comfort simply unattainable. And then there was the border crossing, where we were given colored stickers pressed onto our tank tops to identify our final destination. We were herded like sheep into crowds trying to resemble line ups where massive fans blew our hair and travel documents about… in attempt to dry the beads of sweat trickling down our faces, sides and the backs of our legs. Then we sat in the scorching sun for about an hour, with no information, just a smiling Thai man making jokes and trying to keep track of the numbering system he was using to write on everyone’s colored stickers. As ridiculous and simplistic as it all was, they did in fact have a system for all this. I think it could handle a bit of an efficiency overview personally, but that’s just me.

That’s where I met Laura, an American girl who was enjoying her vacation over Chinese New Year from teaching English in China. We were eventually all crammed into an air-conditioned minibus where we finished the last four or so hours of our journey into Bangkok. It was rush hour and we sat still on the highways for large portions of the time. I remember passing a big golden-framed photo of the king outside a large, ornate building and thinking, “Wow, that must be where he lives.” And then there was another photo of him. And then a billboard. And then another billboard. The king in Thailand, his photo that is, is everywhere. His expression-less face with glasses and soft eyes stare at you, everywhere you go. You can’t escape him. 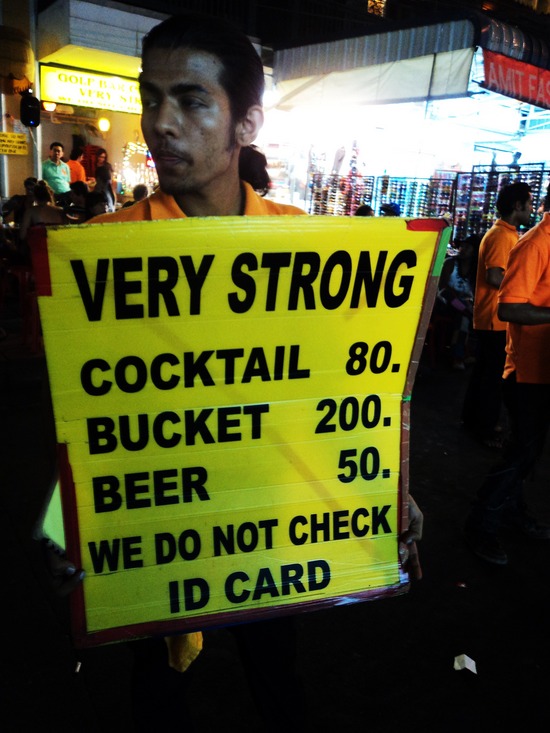 The minibus dropped us off on Khao San Road and Laura and I looked around, taking in all the sights and sounds of Bangkok’s busiest little street, in search of a travel agency. We scurried in and inquired about the night train’s out of town (as I was intending to head down south to Krabi, enroute to my yoga retreat on an island nearby to there and she was heading north to Chang Mai).

All trains were sold out. For days.

So, next option. Haha, such is travel I suppose. The night bus. Not quite as comfy, but wouldn’t be my first bus ride across foreign countryside and at least the price was right. The night busses for that evening had already left so we booked in for the following day (which gave me just enough time to get to my retreat for the 10th when I said I would be arriving) and Laura and I, backpacks strapped on, wandered like kids in a candy store down the street, attempting to search for accommodation as our eyes wandered from lady boys to flashing toys being tossed in the air to hot pad thai in food stalls to drunken tourists swaying there way by. The weight of our bags had us settling pretty quickly for a simple room with two twin beds and a cold shower for about 6$ each. Good enough.

After dropping our bags and having a cold rinse down after the day of sweaty traveling, we strolled out into the street, ready to join in the action. Not really sure what we were in for. Khao San Road. There are people everywhere. Tourists. Locals. Restaurants. Bars. Shops. Women wearing the funniest hats imaginable (in hindsight, why do I not have a photo of that?) trying to sell you bracelets and beaded belts. Bartenders with signs, standing in the street that read “we do not check ID”. Tattoo shops everywhere. Clothes clothes and more clothes. Men whispering “ping pong” into your ear as you passed by. (“Ping pong” is basically an invitation to a show where Thai women, very young women from what I hear as I did not go and check it out for myself, pull swords and pop ping pong balls and other objects that don’t belong out of their vaginas). Laura and I passed on the ping pong and instead, settled in for an evening of sheesha where some Thai woman attempted to play matchmaker and somehow convinced some creepy guy alone at a table to buy us each a bunch of flowers and then tried to get us to buy some for him in return…? What? (It was actually horribly awkward as he just sat there with this blue steel look in his eyes like he was peering into our souls the entire time. Not exactly someone we were about to walk over to and join, flowers or no flowers.) Then we strolled and munched and fresh watermelon. And finished the night off with a Thai massage. 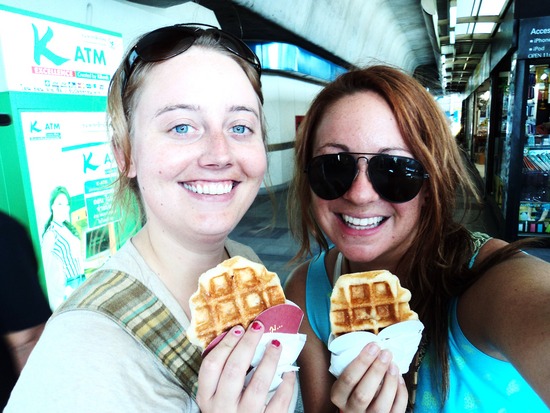 Now, this Thai massage was not the most relaxing massage I’ve ever gotten. They brought us into the room and we stripped down to our underwear, as per usual. We were on beds next to each other. Turns out, my masseuse was a male. Okay. My first reaction was to be a bit uncomfortable (blame it on all the “happy massage” stories you hear maybe?) but I insisted to myself that there was nothing to be concerned about. My masseuse at home is a male and I have no issue with that! He’s always perfectly professional. So I layed there, trying to relax and enjoy it and bending my toes up at weird angles when he leaned forward to massage my legs… ensuring I wouldn’t be poking at anything I didn’t want to provoke. It wasn’t until he climbed onto my back and sat down on my bottom and I literally felt his ballsack touch my sacram (Thai pants are thin…) that I forgave myself for feeling uncomfortable and realized that if my masseuse back home did the same thing, mounted me in such a way, I would probably have been as tense as I was there as well. Either way, I stuck it out. Tried to focus my attention on the shoulders he was rubbing rather than where he sat himself. So a hint for anyone going for a Thai massage in the future – ask for a girl. Nothing against the lovely male Thai masseuses… they’re very good. I just don’t need to feel that much of them on me.

I had been told I had to make a stop at a magical shopping mall called MBK (I still don’t know what that stands for… Mall of Bangkok maybe?) where the six floors of shops and cheap prices would have me jumping for joy. So we went, Laura and I, the next day, before our night busses. The coolest part about it though was how we got there. Budget friendly as I always try to be, we opted for public transport (and no that does not mean a tuk tuk). In Bangkok, they do have a subway train with two lines that is pretty good – pretty clean actually as well. But in order to cross the city to connect to one of those train stops, you take the boat taxi! It’s fantastic! You pay something like 15 baht (which is equivalent to about 50 cents) and wait for it to come, pile on with the zillions of locals, and cruise down the river through the centre of the city. What a tour we got! And for only 50 cents! Then a quick connection to the subway and we were at the mall in no time. (Oh PS… most important thing. If you go and do this, at that subway station where the boat taxi connects, find the food stall that sells the waffles for 18 baht, and get one. Seriously, it may change your life. Maple was my favorite flavour, in case you were wondering.) 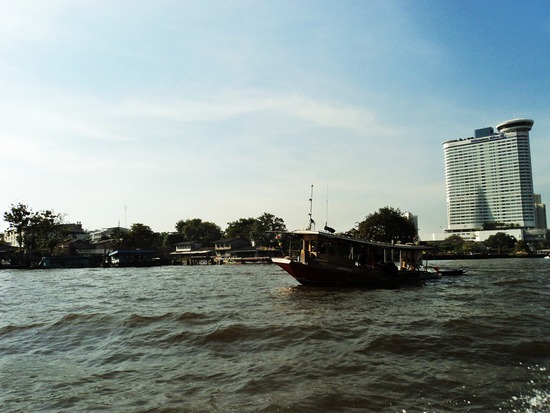 MBK is massive, everyone was right about that. In some places you could barder a little, although future Thailand travelers, bare in mind, it’s not quite as cheap as you might imagine, but still far cheaper than home. Best thing I found, maybe on my entire trip, was this perfume by Kenzo that I had fallen in love with about a year and a half ago but had been too cheap to pay the $100 price tag for, only to find out a few months ago, it had since been discontinued. Here it was, in Bangkok. I got two bottles for $30. Score. Double score.

I finished my day in Bangkok by picking up a few tank tops and pairs of yoga-friendly pants (as I did not pack prepared for a week long yoga retreat) and Laura and I went our separate ways to opposite ends of the country.

Oh, and about fifteen minutes before I boarded my bus, standing outside a tattoo shop in the sticky late afternoon sun, I walked in, tossed 300 baht on the table and got my nose pierced.

And that was Bangkok.